Finally, one of the Republican senators reassured Mrs. Barrett what she already knew…that she wasn’t responsible for legislation or policy, but to be a judge.  A judge! A check, a balance to the legislature.

Those on the left who oppose this fine nominee forget the sheer brilliance of our Constitution in its directive to provide three, distinct branches of government. Each branch can stop or ‘check’ the other. The three together balance out the competing views of each.

There’s a really good reason it was written this way, and it’s to do with what the Founders understood the Bible to teach about the propensity of humans to love power and to be tempted to abuse it. The checks and balances in the Constitution prevent that.

And sure enough, this has been an outstanding plan for 244 years. The world has watched us in wonder, as our nation has proved to be exceptional. And as a Christian nation, we have historically been a witness to the world.

But one party would like to soften the edges of that separateness. If they got their way, the appointed Judicial branch would no longer be independent, but just an extension of elected Congress. But that’s ok to them. If they’re the ones whose policies are bleeding over into the Judicial branch, that is.

That’s what the ONE TRUE definition of what court-packing would do; they would flood the Supreme Court with extra judges who agree with the policies of their party that pushed them in there. Many Democrats have praised the idea. Fifteen justices instead of nine? It could be!

Historically this idea has been hugely discredited. If it were to happen, however, the Supreme Court could become a quite different body. And then what would be it’s point? And those edges of the separateness would be softened.

Same for the Electoral College, a brilliant construct that ensures every single state gets a voice in the national vote. So important for the smaller states. And for those with sparse populations. The Electoral College very effectively ensures balance in our national vote. Tara Ross is one of our nation’s best resources and educators on this – https://www.taraross.com.

If we allow the Electoral College to be hobbled and instead just go by a raw popular vote, where do you think the candidates will do their wooing? And would officeholders work hardest for huge population centers to secure reelection? Very, very possibly and highly likely. How unfair! This would be a disaster.

For the party that wishes to blur the lines of distinction between the three branches of government, these examples we’ve given you would be just the beginning. 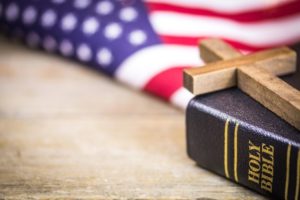 However, the other party wishes to ‘re-imagine’ our American governance. In the opinion of many, that would destroy the country.

Checks and balances are crucial to make sure our country runs well. And the ultimate ‘check’ is the Church!

Believers are the ultimate check preventing our country from drifting away from the principles laid out in the Constitution by believers, for believers and for those who they prayed might yet believe.

This is why the Church MUST VOTE, and has a duty to vote. And pastors, we are so proud of your leadership in this. We know you are conveying this urgent duty to vote to your congregations. We hear about it all the time, and are so glad.