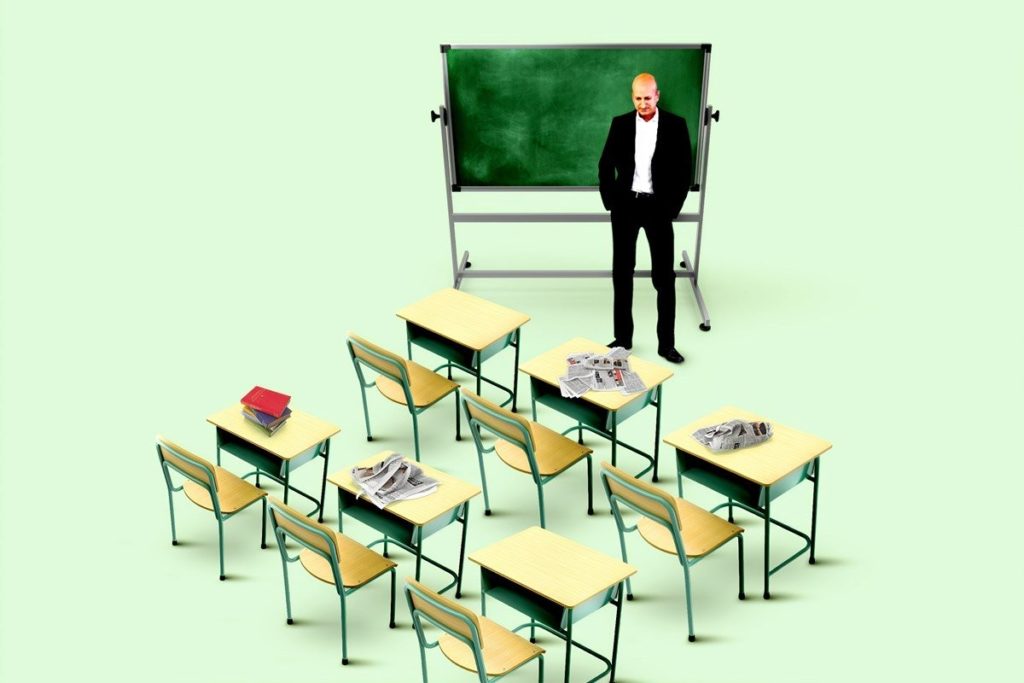 Masks And CRT Are Just The Start: It’s Time To Break The Public Schools (And Here’s How)

Defund the schools for real. Take the amount of money that every public school is spending, per pupil, and put it under the direct control of parents.

(Watch the video for a monologue on this article and an interview with the executive director of the Claremont Institute’s Center for the American Way of Life, Arthur Milikh, on breaking the power of public schools.)

It’s looking to be a miserable fall for school children, at least in the nation’s blue states.

Sure, they’ll finally be back for in-person classes, but thanks to the heroic stupidity of our Centers for Disease Control and local health departments, millions of kids will be forced to wear masks — all day and every day — to protect themselves from coronavirus. That’s a disease we all knew children are at virtually zero risk from. We’ve known this from nearly the very beginning of this. That’s still the case, as a study from John Hopkins proved just last month.

What does this mean for kids? You were a child once. Try to remember how long every day felt, how even a few minutes of unpleasantness felt like an eternity. Even as an adult, wearing a mask literally all day is deeply unpleasant. For millions of kids, it’s torture. And now it’s entering its second year for no reason except that our leaders are too weak to let life return to normal — and they’re too cowardly to admit that COVID-19 won’t vanish with the perfect combo of health policy.

As one satirical headline in The Babylon Bee put it last week, “To Defeat Delta Variant, Experts Recommend Doing All The Things That Didn’t Work The First Time.”

Of course, even without masks, there’s another big danger in schools that we’ve heard all about by now: critical race theory. Technically, that’s a theory that our laws need to be re-examined because, since we’re all equal, any difference of outcome between black communities, white communities, Asian communities, and Hispanic communities means racism, regardless of any other context.

Once that examination is completed, we must design the laws to work for black people (and some hastily added allies) at the expense of everyone else. It’s the kind of thing that leads to fake scholars like Ibram X. Kendi (born Ibram Henry Rogers) suggesting a new amendment to the Constitution that makes it so any difference in racial success rates over a certain threshold is unconstitutional. The amendment would also make “racist ideas” by “public officials” illegal; as ambiguously dangerous a standard as there ever was.

A few states have banned critical race theory from being taught in public schools, although most have not. Some, like Washington state, have made teaching it the law. Both major teachers unions touted it on their websites, andn both wrote in favor of it being taught in public school classrooms. The American Federation of Teachers promised in The Washington Post to legally defend teachers who want to teach CRT in states that have made it illegal. But then something funny happened.

The same American Federation of Teachers reversed course and said they’re not actually teaching critical race theory. The National Educators Association erased its defense from its website. Experts started to show up on CNN and MSNBC to say the same thing. There’s no critical race theory in our schools! Fact-checks started appearing saying that Washington state’s laws mandating CRT in public schools aren’t really mandating CRT in public schools. Rep. Jim Clyburn did an interview last week in which he said the same.

“It’s just a college thing, you guys. CRT? Never heard of her. Hasn’t been here.”

Therein lies a problem, because they might actually get away with this. Not in real life, of course — they’re lying right to our faces — but in a court of law, maybe. Because, technically speaking, critical race theory is a legal framework. It’s the law stuff our friend Kendi was writing about.

Right now in elementary schools, they’re lining children up, telling them to close their eyes, and then asking them questions, and they step forward or backward in order to highlight the racial and economic differences between little kids. They’re teaching them that equality of opportunity is racist. The thing is, that’s not a legal philosophy, it’s just downstream of the legal philosophy.

The founders of critical race theory know this. In fact, they’ve bragged about how so-called
“privilege walks” are downstream of their ideas. They approve of them. But now, they’re aware of how incredibly toxic the CRT brand is, how noxious it is to parents of all races and all income brackets throughout all of America.

They’ve been beset by a parental revolution spurred on by Zoom cameras in classrooms and children doing their ridiculous and racist homework assignments at the kitchen table. So now, its proponents backtracking and claiming that critical race theory is just a right-wing myth that isn’t really being taught.

The proponents of critical race theory know that its decidedly un-Christian values and virtues are being taught in schools. You don’t need to teach the legal framework to instill the central philosophy, and they understand this. Until recently, they bragged about it.

The Big Picture Is A Big Problem

All of this is irrelevant, and here’s where we hit a serious wall on what we can actually do to stop this. Is the problem with our schools really just masks and critical race theory? No, of course it isn’t.

Our schools — from preschool all the way to graduate programs — have gone seriously astray in a way that no single law can ever hope to fix. Masks, “critical race theory,” or whatever you want to call it, are basically just visible sores on our schools. They’re painful symptoms of a much deeper sickness.

The truth is, it doesn’t matter if your children are attending a Christian school, a non-denominational one, or a public school. All of them are attending a religious school, it’s just a matter of what religion is being taught — and our public schools are teaching an evil one.

It’s a religion that tells them that “male” and “female” are just chosen identities, like a costume, and you can be one or both or something in between at any time. It’s a religion that tells them their country is wicked, that its history is just one atrocity followed by another. That the country’s heritage can be broken down into a handful of discrete identity groups, and some races or religions are good and others are bad.

You can’t fix something like this by just banning critical race theory and calling it a day. If your children were spending all day in the hands of a dangerous schizophrenic, could you fix the danger by passing a law telling him not to talk about just one of the voices in his head?

Of course not, your children are still spending all day with a mentally ill person. And that’s our public schools right now. Every year this country spends $640 billion on public K-12 education, and a huge share of that money is going to people with evil ideas who want to poison your children to think the same way.

So what’s the solution? The answer is to think bigger.

Conservatives spent most of the 2010s promoting school choice. Charter schools, open enrollment, easier homeschooling. All this was done in the name of helping children escape failing schools, attend better ones, and, through the magic of competition, encourage all schools to be better.

While homeschooling is up, school choice isn’t quite the hip new fad it used to be. It’s time to revive it in a big way, and this time to shatter the power of the public education monsters. Public teachers unions have long accused anyone who advocates breaking their monopoly of wanting to destroy them. That wasn’t the case then, but since that time they’ve revealed their true selves. It’s time to do it.

For decades, teachers unions and principals have hoarded ever greater amounts of money and bragged that no matter what you try to teach your kids around the dinner table or at church on Sunday, they get them for eight hours a day throughout their most formative period.

Stop letting them win by default. Here’s what we should do: Defund the schools for real. Take the amount of money that every public school is spending, per pupil, and put it under the direct control of parents. Parents can use their slice of education dollars to pay for private school tuition. If instead they’d like to support a homeschooling co-op or buy tutoring, let them. Also allow them the choice to forgo that money and send their kids to the default public schools.

Laws ought to be simultaneously crafted to protect home schools, religious schools, charter schools, and others from government meddling, but it always comes. For this reason, some people will not want to take federal money, and that’s their choice. If they forgo it without sending their kids to public school, the public schools do not get that money by default.

Public school teachers hate this possibility, and that’s one of the best arguments for doing it. It’s certainly not unprecedented: Nevada, a purple state, passed this exact policy six years ago. It only stopped because of an American Civil Liberties Union lawsuit and a bad ruling from a state judge. But rulings can be overturned, and we have 49 other states to work with.

Try to think about education from first principles. Suppose we didn’t have a school system at all, and had to set one up. Would you really choose to create a system where your children spent eight hours a day in the mostly unsupervised hands of ideologues who will preach against your country, your values, your religion, your race, and in many cases, you personally?

Would you make this system the default option, where the only way out is to spend thousands or tens of thousands of dollars a year? Money the average person doesn’t have?

Of course you wouldn’t. Yet that choice is the decision we make every single year when we choose to maintain the public school system as is. It’s time to make a new decision. It’s time to go big. It’s time to raise our next generation with the education and the values we want for them. It’s time to smash the system.

Christopher Bedford is a senior editor at The Federalist, the vice chairman of Young Americans for Freedom, a board member at the National Journalism Center, and the author of The Art of the Donald. Follow him on Twitter.