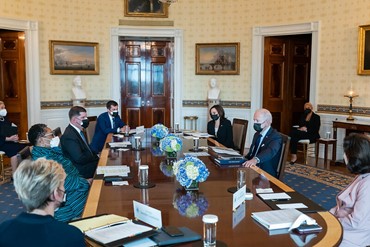 The dubiously titled “bipartisan infrastructure bill” that just passed the Senate this week includes $73 billion for so-called “upgrades” to the electrical grid. However, as Energy Secretary Granholm has made clear in multiple interviews, the bulk of these dollars will be used to connect intermittent renewable energy sources to the grid. In ignoring the real problems that face the aging American grid infrastructure, the bill completely ignores a true threat to US energy security.

For the last several years, the energy grid has been bordering on the brink of disaster. Those who live in the Midwest and Mid-Atlantic will remember well the Winter of 2018-19, when a so-called “polar vortex” resulted in frozen windmills, snow-covered solar panels, and energy companies asking users to voluntarily turn their home thermostats to 58 degrees. The United States came dangerously close to multi-state blackouts then. But if President Biden doesn’t heed the earlier warnings of Trump administration energy officials, the country could potentially be headed for a far worse disaster.

In particularly cold and icy conditions, power stations are often hit with both increased demand from customers trying to stay warm and added strain on the system from the extreme weather, testing the resiliency of the grid. Thankfully, in the case of 2019’s polar vortex, supply just barely met demand, avoiding the worst-case scenario for millions of Americans.

Millions of Texans weren’t so lucky last winter. In that case, subfreezing temperatures combined with an ill-timed shutdown of natural gas pipelines did result in winter blackouts. Approximately 200 people lost their lives from hypothermia or other conditions related to the cold. Meanwhile, homes and businesses without power and heat experienced extensive damage from frozen water pipes. As with the aforementioned polar vortex, an overreliance on intermittent renewable energy was a major contributing factor.

Coal plants, with their large on-site fuel reserves (coal piles), played a major role in “keeping the lights on” in both cases. Despite environmentalist pipe dreams, this nation still needs coal, particularly during extreme weather events. In fact, according to the Energy Information Administration, fossil fuel plants provided 79% of the country’s electricity in 2020, while intermittent renewable energy like wind and solar only provided about 5%.

To help prevent the very situation that occurred in Texas last year from happening, the Trump Administration urged the Federal Energy Regulatory Commission (FERC) to conduct an in-depth study on “grid resiliency” in 2017. In the energy sector, “resiliency” refers to the grid’s capability to respond to extreme or “upset” conditions. When energy grids aren’t resilient, supply can’t meet demand, causing equipment failures and blackouts of cities and states for hours or even days.

The Trump administration asked for the study because it recognized the potential for catastrophe that premature closure of coal plants could create. Energy Secretary Rick Perry said at the time that “a reliable and resilient electrical grid is critical not only to our national and economic security, but also to the everyday lives of American families,” going on to emphasize how “a diverse mix of power generation resources, including those with on-site reserves, is essential to the reliable delivery of electricity.”

Unfortunately, the Commission (which included commissioners appointed by Democrats) didn’t act swiftly. In fact, they didn’t act at all. Then in February of this year, as soon as the Biden administration came into office and appointed a new FERC chair, the study was canceled. Incredibly, the cancelation was in the midst of the Texas emergency – an emergency Secretary Perry had urged the Commission to prepare for.

Neal Chatterjee, FERC Chairman under President Trump and now a FERC Commissioner, understood what a mistake it was to cancel the study, saying that “we are failing the American people by kicking this can further down the road in the middle of a crisis affecting millions of Americans.”

Coal plant retirements notwithstanding, the Biden administration is ignoring a serious concern about the health and reliability of America’s remaining coal fleet. These plants are being forced to operate in an intermittent fashion beyond their design capabilities. Why? Because regulations favor renewable energy, including wind and solar – the very energy sources that millions of Texans found out the hard way that they couldn’t rely on last year.

Our coal fleet was designed to run at full capacity, 24 hours a day, for months on end without interruption. The coal plants and the people that staff them are very good at doing that.

But because of misguided left-wing policies that give renewables first priority, solar and wind generators are allowed to dump their subsidized power onto the grid during peak generation. When this happens, coal plants are forced to operate at a greatly reduced capacity. According to industry experts, this type of operation can result in permanent damage to coal plants that may cause equipment failures at a time when those plants are needed most.

Consumers and voters would be wise to understand that policy makers, politicians, and regulators are making decisions about grid resilience while enjoying a stable grid built on a foundation of fossil fuels. It is very easy to make idealistic pronouncements about being carbon free as one sits in an air-conditioned office on Capitol Hill. But when the air conditioning shuts down and the lights go out, we may find those decisions were dangerously out of touch with reality.