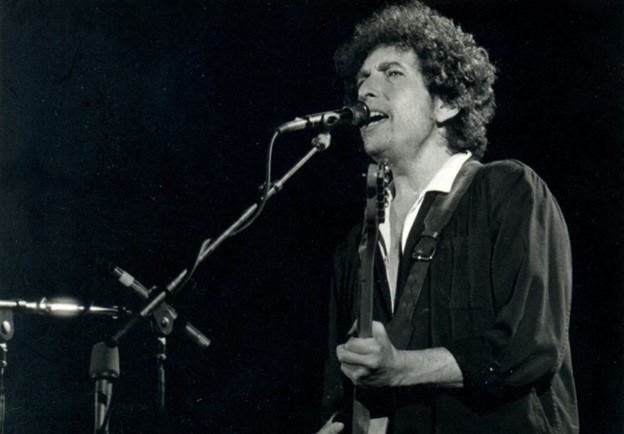 On the 40th anniversary of his final of three albums created after converting to Christianity, here’s a compilation of lyrics worth highlighting.

Of all the reinventions Bob Dylan has undertaken in his long, shape-shifting career, none was more radical and jarring than his conversion to Christianity in the late 1970s. In terms of defying expectations, not even going electric can compare with going evangelical.

This was Bob Dylan after all, a Jewish-born avatar of 1960s counterculture. He could have adopted few other identities that would have felt like such a direct repudiation of everything his fans thought he represented.

What happened? How did the restless mind behind “Blowin’ in the Wind” and “Like a Rolling Stone” find Jesus Christ and later release a trio of Christian rock records?

For a hyper-truncated version, here’s Jeff Taylor and Chad Israelson in “The Political World of Bob Dylan”: “Ultimately, it was a fan throwing a silver cross on stage at a San Diego concert, a personal encounter with Jesus in a motel room in Tucson, the influence of his Christian girlfriend Mary Alice Artes, and conversations with Vineyard Fellowship ministers from the West LA congregation that led to Dylan’s born-again experience.”

Of this “encounter,” Dylan later recalled, “There was a presence in the room that couldn’t have been anybody but Jesus…. I felt my whole body tremble. The glory of the Lord knocked me down and picked me up.”

Out of his newfound faith would come three LPs devoted to God: “Slow Train Coming” (1979), “Saved” (1980), and “Shot of Love” (released 40 years ago today), none of which received much beyond poor to middling reviews. When Dylan took his new material on the road, audiences were in for a surprise, as he refused to play any of his “secular” songs. He also treated fans to impromptu mini-sermons that are almost surreal to revisit.

After “Shot of Love,” the gospel era ended. Dylan explained at the time, “I’ve made my statement and I don’t think I could make it any better than in some of those songs. Once I’ve said what I need to say in a song, that’s it.”

Many observers interpreted his subsequent return to non-Christian music as proof he had abandoned the faith. That’s not clear at all. Dylan has never publicly recanted his Christian beliefs, nor stopped playing songs from the gospel trilogy. Plus, he has made comments in interviews suggesting his relationship with Christ has endured in some form.

As often happens with Dylan’s “lesser” works, the trilogy has grown in stature over the years. But it is rare to find reviewers who approvingly cite or even examine many of Dylan’s lyrics from his trilogy. Many critics and fans keep his biblical message at arm’s length or simply ignore it.

Not only is there much wisdom and poetry in what Dylan had to say, the lyrics are a fascinating window into his theological priorities at the time. When Dylan the songwriter collided with Dylan the believer, the results were sometimes quite profound.

To mark the 40th anniversary of “Shot of Love,” here’s a list of ten lyrics from the gospel trilogy that are worth highlighting and unpacking for a combination of aesthetic, theological, and historical reasons. Some of the lines are era-defining, others are rich with beauty and spiritual insight, and others are just awesome. All reveal a man who was operating with as much purpose and commitment as he ever had in a career not lacking in these qualities.

On “Gotta Serve Somebody,” Dylan underlines a foundational truth about human beings: regardless of who we are, we all worship something. Why? Because it’s intrinsic to our nature.

Of course, God created us to serve Him alone, but man rebelled and has since devised no shortage of false gods from which to derive meaning and significance, whether it’s money, power, influence, beauty, and so on. The point is, something is going to occupy the throne of our hearts. In Dylan’s formulation, the options couldn’t be any more clear-cut.

“Slow Train” is a catalog of sins and injustices that Dylan viewed as pervasive in the world. Harkening back to his “protest era” songs, he rails against corruption, greed, spiritual blindness, and even economic globalization. He doesn’t let himself off the hook, either.

But in each case, he foresees the same outcome: a harvest of divine judgement, as captured in the metaphor of an oncoming train. It was a train Dylan told audiences had been en route “a long time” and was “picking up speed.” His outspoken eschatological fervor remains one of the most striking aspects of this period.

4) “Do you ever wonder just what God requires? You think He’s just an errand boy to satisfy your wandering desires?” (“When You Gonna Wake Up”)

It’s hard to imagine a more concise and biting takedown of moralistic therapeutic deism, the “Eat, Pray, Love” type of corruption of Christianity that elevates personal happiness and fulfillment over faithfulness and obedience to God. Even as a recent convert, Dylan understood the central calling of the Christian life. As he would sing on a later song, “You have given me life to live / How can I live for you?”

In one of the most powerful lines of the trilogy, Dylan affirms the truth that to follow Christ is an act of surrender. At the foot of the cross, we must relinquish control of our lives and submit to God. We must remove the crown of pride and the mask of autonomy and acknowledge that all our earthly schemes of salvation are in vain; only Jesus can save. Simply put, as believers, we are not our own.

If “Slow Train Coming” was too angry and apocalyptic (as some critics claimed), Dylan swung in the opposite direction on “Saved.” It’s more of a traditional gospel record, full of uplift and exultation.

Look no further than the chorus of the title track. Backed by a rollicking tune, Dylan delivers a simple confession of faith that’s wrapped in joy and thankfulness. After being called out of darkness and into the light, he wanted to shout God’s praises for all to hear.

As the title indicates, “Pressing On” is a song of perseverance and striving. Dylan is exhorting himself to run the race set before him. The journey might be arduous, but God is faithful and true. The same Jesus who tells us to pick up our cross and follow Him also says His yoke is easy to bear.

As Dylan acknowledges, God will provide all we need until the day when we can stand with the Apostle Paul and proclaim, “I have fought the good fight, I have finished the race, I have kept the faith.”

Dylan has played “In the Garden” live a total of 329 times, most recently in 2002. On a list of his most frequently performed songs, it sits just outside of the top 50, behind only “Gotta Serve Somebody” of all the trilogy tracks.

This means, on numerous occasions since his Christian “phase” ended, Dylan has stood before the masses and declared that Jesus is the Messiah and Lord. Would he do so in the absence of belief? Was he merely going through the motions? For such a fundamentally serious man – and one who regards music as sacred – it’s hard to believe so.

Here’s a more poetic but still uncompromising variation of Dylan’s much-bemoaned line of “Precious Angel” that dismissed the possibility of any “neutral ground” between faith and unbelief.

10) “In the fury of the moment I can see the Master’s hand / In every leaf that trembles, in every grain of sand” (“Every Grain of Sand”)

“Every Grain of Sand” remains one of Dylan’s pinnacle achievements. It’s a masterpiece of mystical imagery and prayerful reflection that closes the gospel trilogy on a stirring note of humility. Mixing faith and doubt, Dylan meditates on the mysterious interplay between human frailty and God’s sovereign goodness.

Why must we endure hardship? Why can’t we always overcome temptation? Why do we wander in the desert? Dylan doesn’t offer any firm answers, but he does suggest it’s not because God’s grace is lacking in our lives. God’s grace, in fact, is all around us, suffusing life itself.

Barry Lenser lives and works in the Upper Midwest. He loves the Lord, his family, and the Packers.