What is Your Declaration? 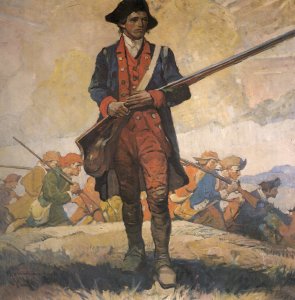 Those of us who are Americans in the original sense of the word, for whom America’s Declaration of Independence and Constitution mean what they meant to their courageous authors, must draw a line around what remains of our free and sovereign selves.

Two hundred and forty-four years ago, John Adams wrote in a letter to his wife:

“The delay of this Declaration to this time has many great advantages attending it. The hopes of reconciliation, which were fondly entertained by multitudes of honest and well meaning though weak and mistaken people, have been gradually and at last totally extinguished. Time has been given for the whole people maturely to consider the great question of Independence and to ripen their judgments, dissipate their fears, and allure their hopes by discussing it in newspapers and pamphlets, by debating it in assemblies, conventions, committees of safety and inspection, in town and county meetings, as well as in private conversations, so that the whole people in every Colony of the 13 have now adopted it as their own Act.”

About this Act, this unprecedented Declaration of Independence, Adams declared: “The Second Day of July 1776 will be the most memorable epoch in the history of America.”

A final version of the document was adopted two days later and signed by the delegates on August second. When or if it was ever presented to King George remains both unclear and unimportant, because America’s Declaration of Independence was not penned to serve as notice to an oppressive government, but as a rallying cry for those whose rights had been oppressed by government.

America was an idea brought to fruition by men who understood that human beings, in order to achieve life as human beings, must be free and self-responsible. Their theory of inalienable rights, whether derived from belief in a Creator or in recognition of man’s nature, provided the basis for a system wherein no man or government of men could be permitted to violate, oppress, or deny those rights. Their theory recognized that life and rights are inextricably entwined. Never before had a nation been created out of the recognition of the needs – both material and spiritual – of human life. Never before had a nation been created in recognition of the value of the individual human life, and the rules set forth for protecting this value were, and remain to this day, as close to perfect as has ever been achieved.

The delay of which Adams wrote, a mere seven months, is minuscule when compared to the decades that have passed since America began drifting incrementally toward an authoritarianism it was created to escape and prohibit. No one person or political party threw a switch one day that suddenly changed America the next. One “minor” compromise at a time over time was all it took; one “minor” rights violation or emergency remedy or for-your-own-good resolution or temporary constitution-infringing measure was enough to open the floodgates for habituated rights violations and freedom-destroying expediencies.

As a result, America as an idea is today an all-but-forgotten echo. As a nation, it is as two-dimensional as a shadow.

Can it be restored incrementally from within, beginning yet again with the idea of individual liberty? Can what was lost be rediscovered by reversing the progression of loss? Can individual Americans uncompromisingly honor the ideas that made America possible? Can we personally uphold and adhere to the Constitutional rule that, despite its deniers and defilers, defines America?

But what can one person do?

One person can, without apology or appeasement, own the knowledge that America was created for the individual person. He can accept the responsibility of awareness and see what America was and what it has become. He can say about America’s malignant decline, “It ends now!” – and act accordingly. He can maintain an active consciousness of what it means to be free while refusing to allow the principles of freedom to ever again be compromised, subverted, or denied. He can uphold and defend the supreme law of the land, the law from which all others must derive. He can personally draw a line around what remains of his free and sovereign person and never again re-draw that line out of convenience, expedience, or fear.

What if you were the only person who understood that what America’s founders created, they created for you and entrusted to you? Would you answer with a despairing shrug, “What can one person do?” Or would you proclaim, “So be it!” and act accordingly?

What is your declaration?