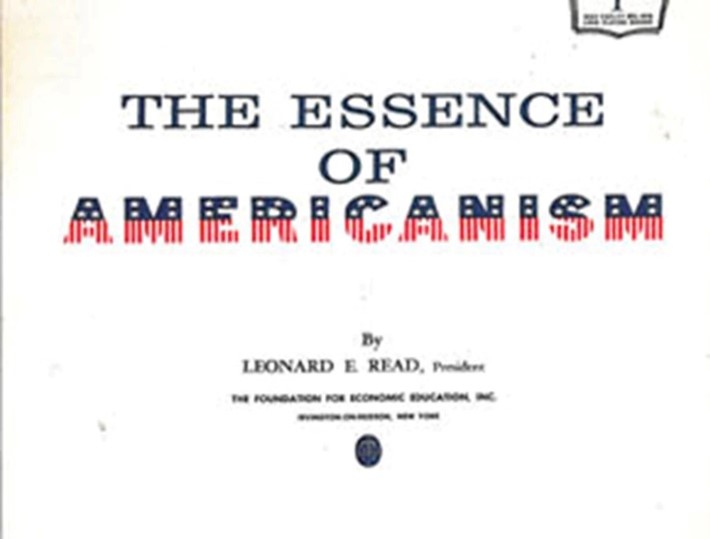 Album cover of a recording of Leonard Read’s “The Essence of Americanism” speech.

Running Away from Our Own Revolution

What Leonard Read meant by ‘Americanism’

In 1961, a group of students gathered for a seminar in a mansion in Irvington-on-Hudson, New York, which was then home to the Foundation for Economic Education (FEE). At the beginning of the seminar, FEE founder Leonard E. Read told them a truth they would never hear in any government school classroom:

“The American people are becoming more and more afraid of, and are running away from, their own revolution.”

Read’s speech became the traditional opening address for a great many subsequent FEE seminars and was adapted as a FEE pamphlet titled “The Essence of Americanism.”

Read may have adopted the expression “Americanism” from his intellectual comrade-in-arms Ayn Rand who delivered Read a copy of her article “Textbook of Americanism” in 1946. (See my essay on that piece “What Ayn Rand Meant by Americanism.”)

For both Rand and Read, Americanism had nothing to do with nationalism. It was about a “principle” as Rand said, about an “idea” as Read put it: namely the principle or idea of individual rights, as proclaimed in the Declaration of Independence, America’s founding document.

According to Read, that idea was the real American revolution: the revolution that both his contemporaries and ours have largely abandoned. As he wrote:

“What do We mean by the Revolution? The War? That was no part of the Revolution. It was only an Effect and Consequence of it. The Revolution was in the Minds of the People, and this was effected, from 1760 to 1775, in the course of fifteen Years before a drop of blood was drawn at Lexington.”

(Adams, by the way, chose Jefferson to write the Declaration of Independence.)

The idea that revolutionized the American mind from 1760 to 1775 and was proclaimed in the Declaration of Independence in 1776 was not only revolutionary for America, but represented a pivotal moment in world history, as Read explained:

“Up until 1776 men had been contesting with each other, killing each other by the millions, over the age-old question of which of the numerous forms of authoritarianism—that is, man-made authority—should preside as sovereign over man. And then, in 1776, in the fraction of one sentence written into the Declaration of Independence was stated the real American Revolution, the new idea, and it was this: ‘that all men are created equal; that they are endowed by their Creator with certain unalienable Rights; that among these are Life, Liberty, and the Pursuit of Happiness.’ That was it. This is the essence of Americanism. This is the rock upon which the whole ‘American miracle’ was founded.”

The unprecedented success of the American experiment in terms of economic prosperity and virtually all other forms of cultural achievement (the “American miracle” as Read called it) was built on the rock of individual rights and their corrolary, limited government. Read said that:

“The Constitution and the Bill of Rights more severely limited government than government had ever before been limited in the history of the world. And there were benefits that flowed from this severe limitation of the state.”

As Read explained, limited government meant no dependency-fostering welfare state, which allowed Americans to maintain a culture of self-reliance and strong character. It also meant a minimization of meddlesome restrictions, which resulted in “a freeing, a releasing, of creative human energy, on an unprecedented scale.”

Tragically, this was not to last. Limited government gave way to a Leviathan state which has trampled our rights, throttled our productivity, and corroded our character.

What happened? As Read said, we lost our way because we ran away from our own revolution:

“The American people, by and large, have lost track of the spiritual antecedent of the American miracle.”

To make America miraculous again, we must reembrace our own revolution and recapture “the essence of Americanism” by understanding individual rights and defending them against the depredations of tyrannical government.