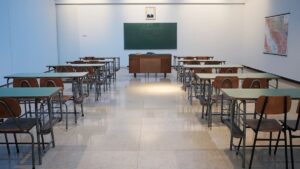 The DNA within the school systems has been radically altered along with administrators, teachers, and many students.

Teachers’ unions are pushing a radical Marxist-inspired agenda that is destroying public education in America.

Over the past several years, the left has aggressively infected the minds of the youngest children with the tenets of critical race theory (CRT) and gender ideology, while academic excellence has been shoved to the back of the bus. As a result, public schools are hemorrhaging students.

In my home state of Minnesota, 2022 “marks the second consecutive year the state’s public school system has lost thousands of students,” the Center of the American Experiment, a Minnesota think tank, reported in February. Why should parents in Minnesota or any other state keep their children in public schools?

In another example, New York City public schools — which compose the nation’s largest school district — have already lost about 50,000 students over the past two years and are expected to lose nearly 30,000 more by the time school begins this fall.

Minnesota Education Commissioner Dr. Heather Mueller explained the poor student achievement outcomes thus: “The statewide assessment results confirm what we already knew — that the COVID-19 pandemic has disrupted our students’ learning and they need our help to recover.”

The problem with blaming poor student outcomes in Minnesota on Covid is that the state’s public schools actually had “little to show for decades of increased spending,” wrote Catrin Wigfall of the Center of the American Experiment in a July 2020 report titled “Allergic to Accountability.”

“The consistently increased flow of dollars into Minnesota’s public schools has not translated into improved student achievement outcomes or more learning,” Wigfall wrote.

Goal of Even More Woke Teachers

For insight, look to what the Minnesota Department of Education now values in professional teacher training when it comes to hiring licensed teachers.

In 2021, Minnesota’s professional educator licensing and standards board proposed an addition to what proficiency standards for teachers to be licensed. Proposed requirements include:

After shutdowns and the abysmal remote learning results, mask mandates, and a further decline in students’ academic performance, the response of the Minneapolis Federation of Teachers (MFT) was to go out on strike for more than two weeks in March, cancelling classes once again for 28,000 students.

American Federation of Teachers (AFT) President Randi Weingarten told her delegates at their convention in mid-July that the union is working hard “on the issues keeping families up at night, from climate change, to accessible healthcare, to the crushing crisis of student debt, to the terrifying safety issues plaguing too many workplaces.”

Instead, many parents are fast coming to the realization that public education as they knew it is a thing of the past.

It’s amazing what we accomplished in our public schools and universities when we had little more than classic literature, chalkboards, and chalk in our schools. As centralized education and the teachers’ unions have gotten bigger and stronger, the quality of education and student performance have declined.

Public schools are no longer the place to send your children to prepare them to succeed in life, or to learn critical thinking skills or high standards of excellence. Nor will they be taught the concept of judging people by the content of their character, not the color of their skin.

It’s time for all Americans to reject the woke agenda that has permeated all aspects of society including public schools. We must find alternative solutions before the damage is irreversible.

Some people still believe we can get our public schools back if we can get control of school boards, eliminate CRT, and the eradicate gender indoctrination fluidity programs. But, even if we are successful in achieving these feats, the DNA within the school systems has been radically altered along with administrators, teachers, and many students.

It’s time for parents and local leaders to make decisions that are best for their children. Passing school choice legislation is a starting point. Let’s make quality alternative solutions for education broad and accessible.

Kendall Qualls is a Republican candidate for Governor of Minnesota. Prior to his candidacy, he was president of TakeCharge, which is an organization committed to supporting the notion that the promise of America works for everyone regardless of race or station in life. He is a former Army officer and healthcare executive. Kendal has been married for 35 years and has five children.