Are You in the Top One Percent of the World?

A few short years ago, the “Occupy” movement helped put the spotlight on income inequality around the globe. While the protestors have long retreated from Wall Street and other power centers, the issue hasn’t exactly gone away.

Indeed, the gap between the haves and the have-nots has grown wider than ever. According to the Credit Suisse Global Wealth Report 2018, the top 1% of adults account for more than 47% of household wealth globally.

This raises an interesting question: Who exactly are the 1% worldwide? The surprising answer: If you’re an American, you don’t have to even be close to being uber-rich to make the list.

According to the Global Rich List, a website that brings awareness to worldwide income disparities, an income of $32,400 a year will allow you to make the cut. $32,400 amounts to roughly:

So if you’re an accountant, a registered nurse or even an elementary school teacher, congratulations. The average wage for any of these careers falls well within the top 1% worldwide.

Not surprisingly, it takes a much higher income to crack the top 1% of wage earners in just the United States. You’d have to make $421,926 to make the cut, according to a 2018 report by the Economic Policy Institute.

To reach the top 1% worldwide in terms of wealth – not just income but all you own – you’d have to possess $770,000 in net worth, which includes everything from the equity in your home to the value of your investments. That’s equal to roughly:

Americans rank extremely high in terms of household wages – fourth worldwide, according to the Organization for Economic Co-operation and Development (OECD) – but not as high when it comes to median wealth. In fact, the Credit Suisse Global Wealth Databook ranks the U.S. just 25th by this measure.

There are a number of reasons for this disparity. One is that U.S. consumers tend to rely on credit more than their counterparts in, say, Europe. The typical American adult carries $60,205 in debt, according to the Credit Suisse data.

And the latest data reveal massive and growing income inequality in the United States: In a 2017 paper, economist Edward N. Wolff used Federal Reserve data to show that the top 1% of U.S. households have more wealth than all the households in the bottom 90% combined. 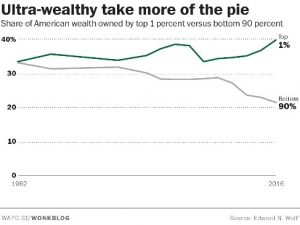 Even so, many middle-class Americans who have spent years paying down their mortgages and saving for retirement belong to the upper echelon of the world’s wealthy.

The bar to enter the top 1% wouldn’t be this low were it not for the extreme poverty that so much of the globe endures. For example, the average adult in India has $7,024 in total wealth, according to a report by Credit Suisse. The average wealth of adults in Africa is even lower, at just $4,138.

Compare that to the wealth of $403,974 for the average adult living in the United States and $144,903 for Europeans. Now, it’s true that the term “average wealth” can be misleading, especially for countries where assets are so skewed toward the ultra-rich, like the United States. But even the median U.S. wealth of $61,667 – that’s the amount where half of people have more and half have less – far outpaces other parts of the globe.

The term “top 1%” of global income may sound like an exclusive club, but it’s one to which millions of Americans belong. It’s a reminder of just how prosperous developed countries are compared to the vast majority of other people who share our planet.

[Editor: for more balance on inequality go here and here]