Highlights from the Real Story of Christmas

Whether a religious person or a student of history, you will find the real story of Christmas interesting and inspiring. Especially having the benefit of two thousand years of hindsight. We now know the significant influence this story has had on the world. Here are some excerpts from The Real Story of Christmas by Dr. W. Cleon Skousen:

“It was probably in the month of August, and just six months after Gabriel appeared to Zacharias (to announce the birth of John the Baptist), that he also appeared to Mary in Nazareth.

“She was alone when the celestial vision opened before her. As with Zacharias, she was deeply frightened. The sudden brilliance of the heavenly messenger momentarily overwhelmed her and even before she could speak, the salutation of the glorious Gabriel fell upon her ears. “Hail, thou that are highly favoured. The Lord is with thee! Blessed art thou among women!”

“Instinctively Mary drew back, but with comforting assurance the angel quickly added, ‘Fear not, Mary, for thou hast found favour with God.’

“Then in solemn words designed to inspire confidence and understanding he delivered his precious message: ‘Behold, thou shalt conceive and bring forth a son. He shall be called Jesus, the Son of the Highest, and the Lord God shall give unto him the throne of his father, David.’

“Mary could not comprehend. ‘How shall this be?’ she asked.

” ‘The Holy Ghost shall come upon thee, and the power of the Highest shall overshadow thee. Therefore that which shall be born of thee shall be called the Son of God.’

“Mary responded to this thrilling message with words which reflect the depth of her spirituality and the beauty of her character.

” ‘Behold the handmaid of the Lord,’ she said. ‘Be it unto me according to thy word.’

“Left to herself, Mary treasured up the words of the angel in secret. Neither her parents nor even Joseph whom she deeply loved were informed. Nevertheless, there was one person with whom she felt she might share her sacred knowledge. That was Elisabeth. Therefore, she made haste to go straightway and visit her.

“Sometime prior to Mary’s departure, however — perhaps it was only a few days before — the glory of God encompassed her and for Mary the miracle of new life began. 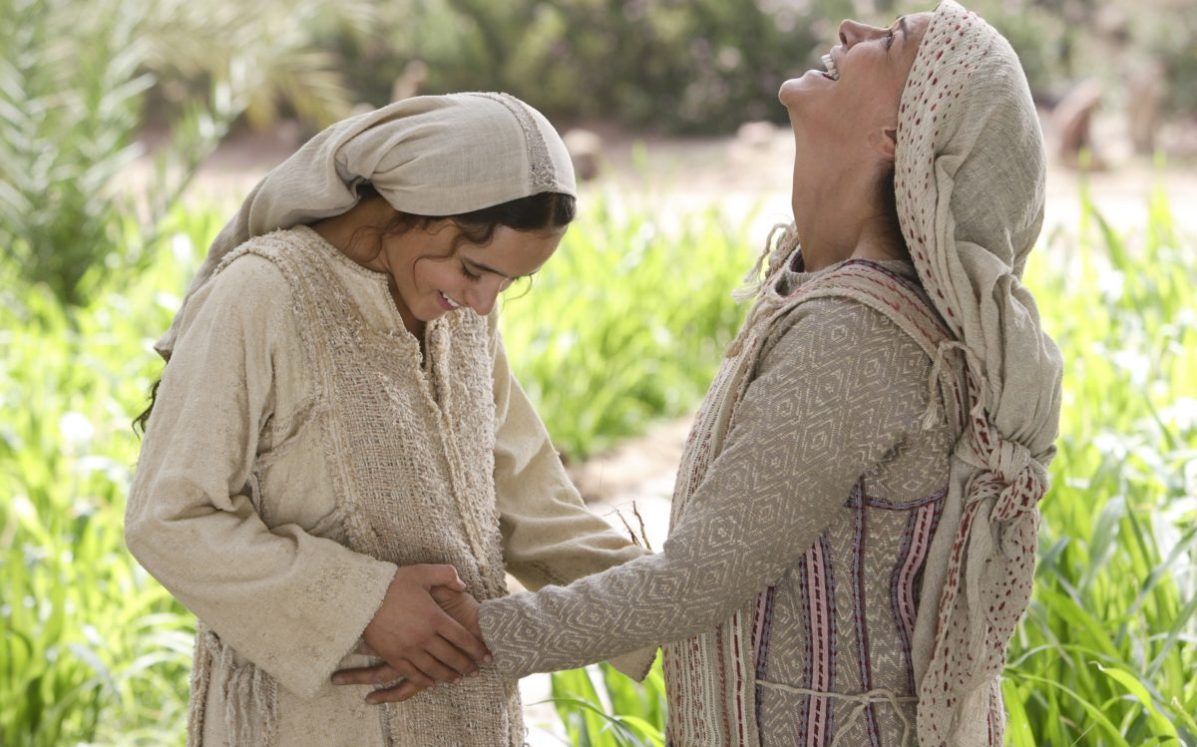 “When Mary arrived at her cousin’s home Elisabeth rose to greet her. The older woman stretched out her hands to the young girl and being moved by the Spirit of the Lord she exclaimed fervently: ‘Blessed are thou among women, and blessed is the fruit of thy womb.’ Then she added humbly, ‘And whence is this … that the mother of my Lord should come unto me?’

“During the following three months Mary stayed with Elisabeth to await the time when Elisabeth would be delivered of her child. And when her baby came it was a male child just as Gabriel had predicted. Now Mary returned to her home in Nazareth and there Joseph anxiously awaited her.

“How long it was before he learned she was with child we do not know, but when he did become aware of it he was overwhelmed with grief. Under the Jewish law a betrothal was almost as binding as marriage itself and faithlessness was punishable by death. The only alternative was to ‘put her away’ by a bill of public divorcement. Joseph was not bitter against Mary, only sorrowful, and therefore he resolved to ‘put her away privily.’

“In the dark hours of the night, while Joseph feverishly pondered the sudden shipwreck of his prospective marriage, the angel of the Lord appeared in a dream and said: ‘Joseph, thou son of David, fear not to take unto thee Mary thy wife; for that which is conceived in her is of the Holy Ghost. She shall bring forth a son, and thou shalt call his name Jesus: for he shall save his people from their sins.’

“Who will describe the transitional joy which flooded the mind of Joseph as this revelation brought to him a beautiful and sympathetic understanding of Mary’s sacred calling? And who will record the tender scene when he confided to Mary that now he shared her secret?

“Joseph’s marriage to Mary must have followed immediately, for the angel commanded it, and by the time of the taxing or census ordered by Caesar, Joseph and Mary are specifically referred to as husband and wife.

“Since Bethlehem was originally the ‘City of David’ it was therefore the ancestral home of both Mary and Joseph. In other parts of the world the Roman government had required each person to register for the taxation at his place of residence. In Palestine, however, the Jews were allowed to follow their ancient custom of returning to the region of their forefathers to be registered. For this reason Mary and Joseph had come to Bethlehem.

“But the City of David did not welcome them. As they threaded their way among the teeming crowds of Bethlehem, Joseph must have felt increasing apprehension. Where would they stay? Everywhere they met with the same rebuff: ‘No room!’

“As time passed the situation became desperate. Knowing Mary’s great mission it must have seemed incomprehensible to Joseph that all doors should close against them. Could not there be some help? Surely there must be some place of comfort and convenience for a young mother already feeling the imminent travail of childbirth. But to all his pleas he was turned away. ‘No room!’

“Overwhelmed with anxiety, Joseph was finally forced to accept what he normally would have rejected with disgust. A stable. His soul must have been harrowed to the quick as he led his trembling young wife into this humble abode made for cattle. In haste he prepared for her the most meager semblance of comfort. No doubt he secured what help he could from the nearby inn, but at best it would have been grossly inadequate. No other king was ever born into the world under so humble a circumstance.

“Only a mile distant, hovering near the outskirts of the city, certain angels prepared to make their presence known. Shepherds, abiding in the fields and watching their flocks by night, were chosen to be the recipients of a magnificent vision. It commenced the very moment Mary’s precious infant was born. Immediately the shepherds saw the veil of mortality sheared back, and an angel stood before them with a glory which enveloped the scene in a radiant light. 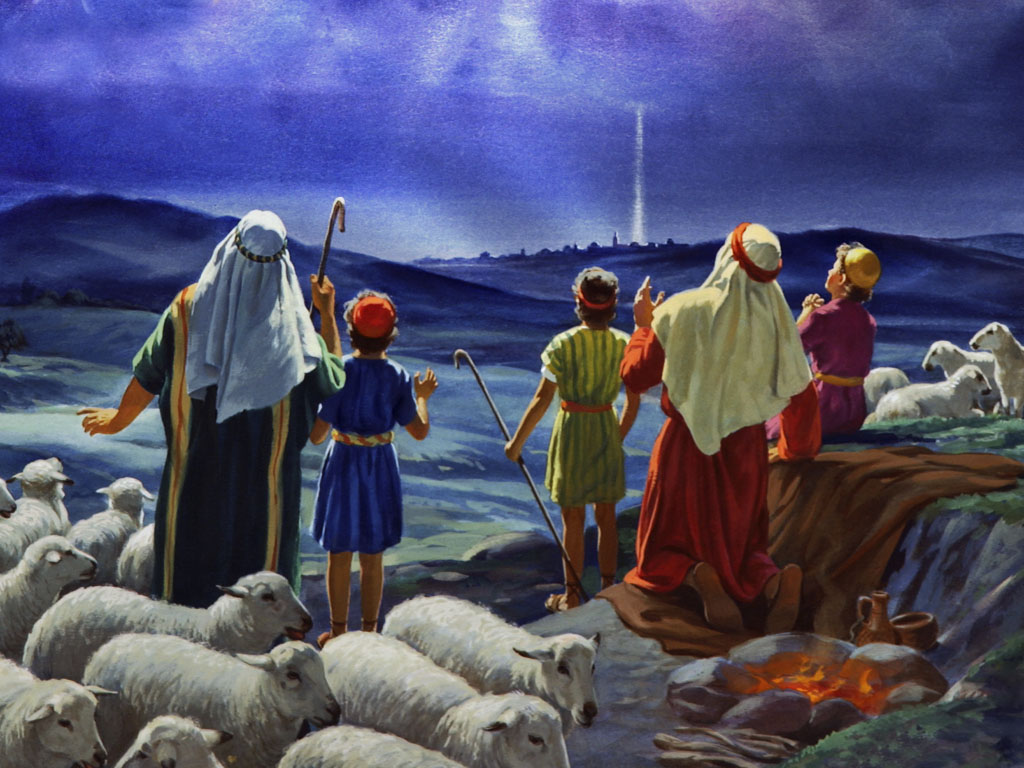 “The shepherds thought they would be consumed and shrank back in fear, but the angel said: ‘Fear not; for behold, I bring you good tidings of great joy, which shall be to all people. For unto you is born this day in the city of David a Saviour, which is Christ the Lord. And this shall be a sign unto you, ye shall find the babe wrapped in swaddling clothes, lying in a manger.’

“At such a moment the hosts of heaven could be held back no longer. The majestic choir of former-day saints burst into song. The shepherds heard them sing: ‘Glory to God in the highest, and on earth peace, good will toward men.’

“When the vision closed, the shepherds left immediately to go into the town and seek out the location of ‘the child lying in a manger.’ Perhaps the flickering flame of a tallow lamp sent its rays into the night to guide them to the stable’s portals. And when they had gathered round they found the babe truly wrapped in swaddling clothes and cradled in a manger.

“But in addition to that there was nothing unusual in the nativity scene to impress them with its power. They simply beheld a humble Galilean peasant and his wife with a newborn child. There were no halos of light about their persons, no visible cherubim. Nevertheless, with the glory of the angels still fresh in their minds, the shepherds looked upon the sleeping child with devotion and awe. The Savior had entered mortality!

“When the shepherds finally left the stable they ran swiftly to awaken their friends and neighbors. To all who would listen they related the wonderful night vision and the things they had been told concerning this newborn child. But the people were not impressed. The scripture says they merely ‘wondered.’ Nevertheless, this did not dampen the ardor of the shepherds. They returned to their flocks ‘glorifying and praising God for all the things they had heard and seen.’

“And so the early morning hours of the first Christmas passed without further incident. While the baby slept, Mary treasured in her heart the thrilling triumph of this hour.

“But where were the Wise Men? Although Christmas pageants have it otherwise there were no Wise Men present on the night of nativity. In fact, their homeland was far away to ‘the East.’ During the early hours of this first Christmas morning they were in their own country rejoicing at the sudden appearance of a great new star in the heavens. The prophets had said this star was the sign by which they would know that the Savior had been born. Therefore, the Wise Men promptly prepared to depart for the land of Palestine. They wanted to see this wonderful child and give him their gifts of devotion. But it was a long journey. The scripture is plain that it was weeks or perhaps even months before the Wise Men arrived in Bethlehem.

“Much else that has been added is man’s homemade invention — the pleasant, lighted tree comes down to us from the days of heathen Rome, the holly wreaths and mistletoe from the ancient, mystic Druids, the exciting visit of St. Nicholas from fourth century Christian tradition and the happy, jolly Santa Claus from pure modern imagination.

“But with it all, the most important thing still survives — the spirit of peace on earth, good will toward men.

“Never at any other season does peace come closer to a universal reality than at Christmas time. More friends are remembered and more enemies forgiven than at any other time of the year. It is a necessary part of the greatest story ever told.”

The National Center for Constitutional Studies