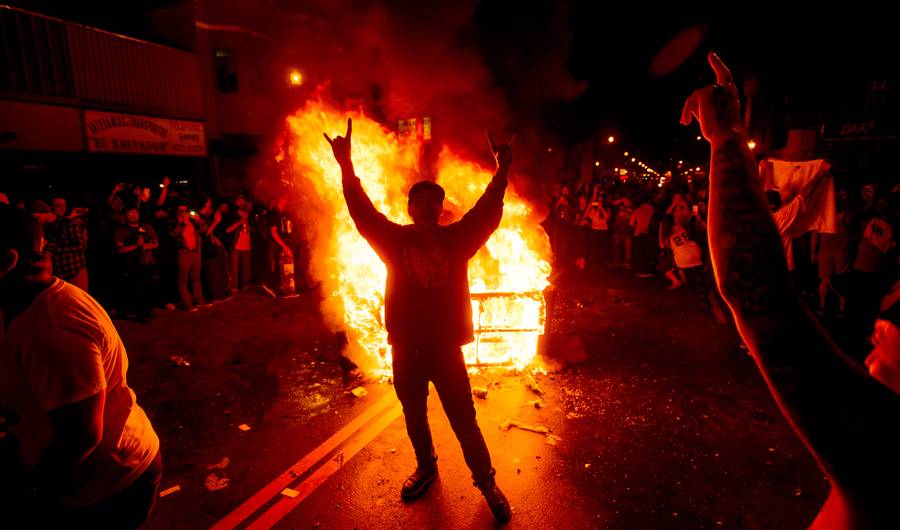 Socialism’s Fire Arc Must Be Stopped – Trump Sees It

Firefighters know the moment of a fire arc, or backdraft.  The fire consumes all oxygen, then heat and pressure rise, black smoke pours from openings, and an explosion ensues. All outside is pulled in.  Political revolutions are just like that.  They start hot, contained, then explode.  We are approaching a political fire arc right now – and Trump sees it.

As pressure rises, protests get violent, organizations are infiltrated, and cities shaken night after night by mobs, riots, and attacks on police, something unfamiliar but discernible is happening.

If initial unrest was about reviewing police tactics and correcting racial bias, that is no longer the case – has not been for months.  What we are facing – and most Americans know it – is anti-democratic violence, coordinated by covert organizations, aimed at fanning resentment, boosting the fire’s heat and reach, moving into suburbs, avoiding accountability, claiming protest rights.

Americans are not stupid.  Moreover, they get smarter each day.  Most see this rolling violence is not occurring in a vacuum, no longer about racial justice.  Many perpetrators are white.  Marauders and socialist infiltrators have been given running room by left-leaning politicians.

Americans realize we need strong leaders – who will draw lines, separating peaceful protesters from violent rioters, earnest souls from anti-American socialists, lawbreakers from police.  They realize – after the conventions – that one party is letting this happen, the other resolved to stop it.

This is where truth begins to wash over people.  Like firefighters in a blaze, suddenly made aware of an impending “fire arc,” Americans are sitting up and taking notice.  They are right to do so.  Words of a columnist are not important – but listen to history.

Karl Marx laid it bare: “There is only one way to shorten …convulsions of the old society and bloody birth pangs of the new – revolutionary terror.”  If “terror” is too strong, try this. “My object is to dethrone God and destroy capitalism.”  Too strong?  Try this: “Keep people from their history and they are easily controlled.”

Marx thought morality was irrelevant, and power everything.  So do modern Socialists. “Communists everywhere support revolutionary movement against the existing social and political order … They openly declare that their ends can be attained only by forcible overthrow of all existing social conditions.” Sounds a lot like … Portland, doesn’t it?

What we are seeing – to be honest – is an amalgam of disappointed protestors who wanted reform, irrational anti-Trump activists, and – most dangerously – a source of “fire arc,” Democratic socialists, avowed Marxists, and aspiring Communists willing to upend America.

This is what President Trump, Senate and House Republicans are fighting to stop.  Reelecting Trump gives America a chance to avoid “fire arc,” a leap of violence into suburbs and beyond.

While it may sound trite to say old line Democrats would not recognize their party, it is true.  They would have no time for this life-rupturing, indefensible violence.  So, one last quote.

Said Martin Luther King: “Violence, as a way of achieving racial justice, is both impractical and immoral.”  He explained: “It is impractical because it is a descending spiral, ending in destruction for all” and “it is immoral because it seeks to humiliate the opponent rather than win his understanding; it seeks to annihilate rather than to convert.”

That is what socialism and communism do.  They annihilate because they cannot convert.  No informed population swaps freedom and prosperity for despotism and federal subjugation.  No one in their right mind chooses violence over law.  Said King: “Violence is immoral because it thrives on hatred rather than love.” That is why we oppose it.  That is why Trump opposes it.  That is why we can give no quarter to an impending “fire arc.”