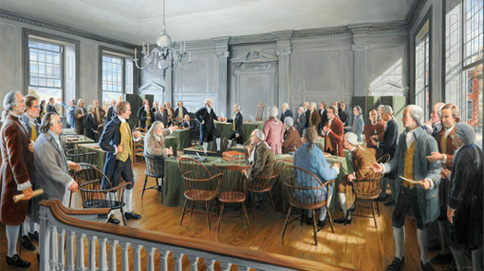 If The Founders Didn’t Compromise On Slavery, The Constitution And United States Wouldn’t Exist

For a country formed as a marriage between free and slave states, the Constitution was a compromise.

Why are Americans debating whether the Constitution is a pro-slavery document more than 150 years after the abolition of slavery? Can it be that, after decades of disinterest, Americans have suddenly realized history is fascinating?

Pro-Slavery Sentiment in the Constitution?

The claim that the Constitution was pro-slavery rests on two clauses that dealt with slavery and supported the interests of slave-owners and slave states. One clause states that fugitive slaves, as well as other persons “held to service or labor,” shall be returned to their masters. The other says that three-fifths of slaves shall be counted to calculate the number of representatives a state may send to Congress, and the number of electors a state may send to the Electoral College in presidential elections.

Some argue that other sections of the Constitution were pro-slavery as well — for example, clauses guaranteeing various rights, privileges, and immunities to citizens – but the case is tenuous since such provisions are common to all republics. Likewise, there is no reason to assume the militia clause’s discussion of domestic insurrections was a veiled reference to slave revolts in particular, since domestic rebellions were common in slave and non-slave societies alike. Moreover, it was a citizen uprising in a free state, Shays’ Rebellion in Massachusetts (1786-87), that figured so prominently in the Federalist campaign to craft the new federal constitution.

Such a marriage by necessity created a mutual government that reflected the wishes, interests, and concerns of both free and slave states. The way the framers secured this difficult union was to create a federal government of limited powers that had no jurisdiction to govern the domestic affairs of the individual states.

Balancing the Slave and Free States

It is true, therefore, that the federal Constitution did not force abolition on the slave states, but neither did it force slavery on the minority of free states. Had the federal government been empowered to govern the domestic affairs of the states, the majority (slave states) would have been able to force slavery on the minority (free states). The fugitive slave clause legitimized and secured slavery in the slave states, just as the Constitution legitimized and secured abolition and emancipation in the free states.

Moreover, the Constitution permitted Congress to outlaw the slave trade and ban slavery from U.S. territories, both of which Congress did in quick order. Further, Article 1, Section 9 established a ticking time bomb of sorts to outlaw the importation of slaves in 1808.

The Constitution Was a Compromise

The three-fifths compromise likewise catered to the worries of slave states but also to those of free states. While southern states wanted all slaves counted for the purpose of congressional apportioning, northern states wanted no slaves to be counted. The Constitution split the baby in two, giving both sides roughly half of what they demanded.

It is misleading, therefore, to ask whether the Constitution was pro- or anti-slavery. For a country formed as a marriage between free and slave states, the United States was necessarily a compromise. Its founding contract necessarily outlined a live-and-let-live approach to slavery.

Those who are impressed with the ability of those anti-slavery Americans to question and overturn moral assumptions that their civilization, their religion, and all of humanity had upheld for thousands of years are bound to be impressed with their accomplishments, and thus see the glass as half-full. How will you choose to see it?

Guy Chet is a Professor of American History at the University of North Texas, and author of “The Colonists’ American Revolution: Preserving English Liberty, 1607-1783.”