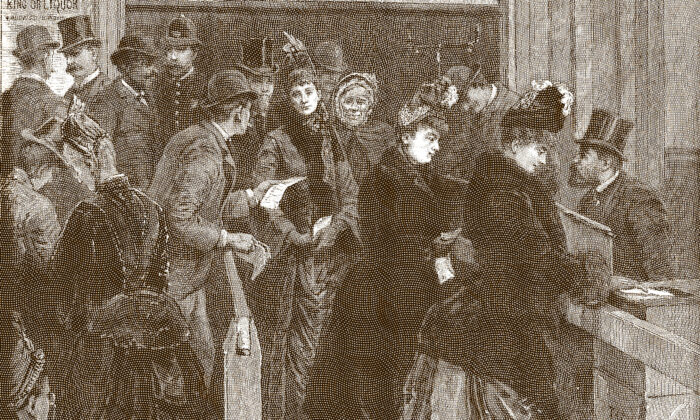 Women line up to vote in a Boston city election on Dec. 11, 1888. Before the 19th Amendment, many states permitted women to vote in federal, state, or local elections. (FPG/Getty Images)

One way that some writers try to discredit the U.S. Constitution is to assert that the document’s original meaning discriminated against women.

Thus, a 2011 Time Magazine cover story claimed that “the [Constitution’s] framers … gave us the idea … that women were not allowed to vote.” An Oct. 13, 2020, article in The Hill added: “The very fact that [Amy Coney] Barrett accepted the president’s nomination means that there are limits to her originalism. She clearly doesn’t believe that being a woman disqualifies her from sitting on the Supreme Court.”

The author of the Time article formerly headed the National Constitution Center, while the author of The Hill piece sports a “Ph.D. in Political Science from Indiana University, with a focus on comparative constitutional law.”

Both of them should have known better.

It has been more than a century since the state legislatures ratified the 19th Amendment, which guaranteed female suffrage nationwide. The amendment is worded in a way that readily provokes two questions: (1) Taken in context with previous amendments, it implies that women already voted in some states; is this true? and (2) Why didn’t the amendment add the right to hold federal office?

The answers are: (1) Yes, before the amendment was ratified, women voted in many states. Where they were blocked from the polls, it resulted from a decision by state authorities. It wasn’t dictated by the Constitution. (2) The original Constitution permitted women to hold federal office, as the case of Rep. Jeanette Rankin of Montana demonstrated.

In fact, the Constitution never barred women either from voting or from holding federal office. On the contrary, the document’s framers carefully avoided sex-based tests for voting or office-holding, just as they avoided tests based on race, property, or religion. Here’s the background:

When the Constitutional Convention met in 1787, most state constitutions contemplated that voters and officeholders would be male. Some expressly limited voting to “male inhabitants” (New York, Massachusetts) or “freemen” (New Hampshire, Pennsylvania). The Virginia Constitution provided for election to the state Senate of “the man who shall have the greatest number of votes in the whole district,” and the New York Constitution described the state legislature as consisting of “two separate and distinct bodies of men.”

Although at the time, people often employed the word “man” generically to signify a human being, these documents probably meant “man” in the narrower, male sense. For example, the Virginia Constitution’s use of “man” was interpreted in practice to limit voting and office-holding to males.

But not all state charters were written that way. The New Jersey Constitution was gender-neutral. It nowhere contained the words “man” or “men.” Rather, it granted both suffrage and the right to hold office to “all inhabitants” who met certain property requirements. It uniformly referred to officeholders as “persons.”

The New Jersey Constitution did use the pronoun “he” and its variants. But, of course, before the PC language-manipulation project of recent years, standard English used “he” and its variants to designate either men or women. Women had their own pronouns; men had to share theirs.

Contemporaries fully recognized the New Jersey Constitution as gender-neutral. That’s why women could vote in that state. They voted in such numbers that New Jersey political operatives routinely included appeals for the female vote.

The spirit of the time favored female political involvement in other states as well. Massachusetts saw sporadic female voting. During the public debates over the Constitution, women participated actively on both sides of the issue. In addition to voting for ratification convention delegates in New Jersey and perhaps elsewhere, women organized public events, mostly in favor of the Constitution. Mercy Otis Warren of Massachusetts (later a distinguished historian) contributed essays against the Constitution.

And both sides apparently made written appeals to women for political support.

The delegates to the 1787 Constitutional Convention were consciously writing for the ages. They surely realized that female suffrage could spread beyond New Jersey. Politics being what it is, the power to vote would encourage women to run for political office as well. The framers, therefore, made the document agnostic on the subject of gender. Any restrictions based on sex would have to be imposed at the state level, because the Constitution didn’t impose them.

The records of the convention show that gender neutrality was the dominant assumption from its early days. The Virginia Plan, the outline used to kick off the debates, was gender-neutral. Judge William Paterson’s competing New Jersey Plan followed his state’s basic law by referring to participants in public affairs as “citizens,” “inhabitants,” and “persons.” Only once in the New Jersey Plan did “man” or “men” appear, and that was in the phrase “body of men” to describe a presumably armed band of men defying federal law.

From the beginning, moreover, the framers accepted that representation in the lower house of the national legislature would be based on state population or wealth, rather than according to the number of males, as in states such as New Hampshire and New York.

Later in the convention, the framers did consider some gender qualifications—only to reject them. For example, in late July and early August 1787, a Committee of Detail fashioned the convention’s resolutions into a first draft of the Constitution. Committee member James Wilson suggested that electors be limited to “freemen,” as in his own state of Pennsylvania. His colleague Edmund Randolph’s initial outline listed “manhood” as a possible suffrage qualification.

But the committee rejected both proposals as “not justified by the [convention’s] resolutions.” When the committee draft emerged, it avoided the singular word “man” and referred to the president as a “person.”

In the interim, though, some gender specificity crept in. The Committee of Detail draft described the national legislature as consisting of “two separate and distinct Bodies of Men.” It also granted the president the title of “His Excellency,” with no provision for any “Her Excellency.” And later in the convention, Pierce Butler of South Carolina proposed, and the convention adopted, a clause with a one-time appearance of the phrase “He or She.” Of course, such a phrase might suggest that where the Constitution employed only “he” (as everywhere else in the document), it meant only males.

Later in the convention, however, the delegates dropped “He or She,” thereby clarifying that “he” encompassed persons of both sexes. The convention also delegated final drafting to a Committee of Style. Committee member Gouverneur Morris did most of the actual writing. With respect to gender, he followed the New Jersey model. The final version of the Constitution made the following changes from earlier drafts and resolutions:

This gender neutrality wasn’t lost on the wider public, and may have been one reason that more women worked for the Constitution than against it. But gender neutrality also came under fire from the Constitution’s opponents. One essayist writing under the pseudonym “Cato” objected to the document’s allocation of representatives by “inhabitants” rather than by male freemen. Another writer, satirizing opposition arguments, criticized the Constitution because it didn’t limit the president to a person “of the male gender.”

The satirist pointed out that “without [such an] exclusion,” Americans might “come to have an old woman at the head of our affairs.” Of course, those sexist arguments didn’t prevail.

Sex-based restrictions were left to the states, and, over time, states gradually abolished them―a development made possible by the Constitution’s gender neutrality.

Robert G. Natelson, a former constitutional law professor who is senior fellow in constitutional jurisprudence at the Independence Institute in Denver, authored “The Original Constitution: What It Actually Said and Meant” (3rd ed., 2015). He is a contributor to the Heritage Foundation’s “Heritage Guide to the Constitution.”