As the 2020 presidential campaign heats up, it’s disturbing that members of both parties seem unwilling to talk about Social Security. It appears that the program is on such shaky ground that even its mention is political dynamite. How bad is it? Social Security will become insolvent in just 16 years. Who says so? The people who run the Social Security Administration.

Social Security Will Be Bankrupt

Let’s be crystal clear about what’s happening. Politicians and bureaucrats used to use the word “insolvent” to describe Social Security’s future. They’ve now started to use the term “reserve depletion.” The rest of us should use the correct term: bankrupt. Social Security will be bankrupt in 16 years. Politicians pull a sleight of hand by saying (when they manage to say anything at all) that Social Security won’t be bankrupt because it can continue to make 80 percent of promised payments into the infinite future. Everywhere outside the Washington beltway, “bankrupt” means the inability to make promised payments. Being able to make partial payments doesn’t count. Those in doubt are welcome to try the argument with their credit card companies.

That alone should be enough to give reasonable people pause. But, even if some last-minute miracle pulls Social Security back from the financial brink, a number of serious problems will remain. It turns out that Social Security is more of a class system than politicians would like to admit, and it puts some of us at a material disadvantage to others in ways no politician would want to discuss. But first, some basics.

The Social Security tax cap is a boon to budding entrepreneurs. Around 45 million Americans have “side businesses.” These are starter businesses—hobbies that have started to generate income or gig arrangements (like driving for Uber or renting out property on Airbnb) that generate a little extra spending money. Many of these side businesses remain simply that. But over time, some become full-fledged businesses that provide the owners’ main sources of income and possibly even employ others.

That’s a 12.4 percent boost on that extra income and is a strong incentive to keep growing the side business. But, raising the Social Security tax cap slaps a 12 percent tax on side businesses like this that are on the verge of becoming full-fledged businesses. If a malicious politician were to design a tax code to dissuade people from starting businesses and creating jobs, it would look a lot like an increase in the Social Security tax cap.

Social Security Can’t Be Passed Down 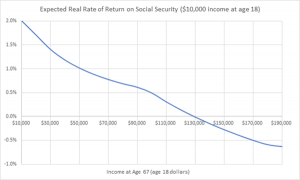 Source: Figures are constructed according to the AIME and PIA formulas from the Social Security Administration.

Social Security Is Not a Safe Investment

Is Social Security Worth Saving?

This raises a critical question: Why are we trying to save Social Security at all?

There is literally no reason—at least not for taxpayers. Taxpayers would get a much better deal, both in terms of risk and return, if they kept their Social Security taxes and invested them privately. And, we could eliminate a massive government bureaucracy that accounts for one-quarter of the entire federal budget. Social Security does provide a safety net for the poorest retirees and those who are unable to work. That function of Social Security is worth retaining. But that function is a very small part of what Social Security does.

Social Security as it is presently construed will blow up in our faces, and that will happen relatively soon. The longer politicians wait to address the problem, or the longer they can put off the reckoning through stop-gap measures, the bigger the boom will be. If there is a solution, it lies in shutting Social Security down. That no politician will even mention the problem speaks to the coldest of all political realities: Washington would rather retain a failing program if fixing the program means losing control of it. Why? Because political leaders are motivated by power every bit as much as business leaders are motivated by profit. And retaining power means maintaining control, no matter the cost to working Americans.

That we are in an election cycle and none of the 23 candidates for the presidency is talking about this should have everyone’s attention. The silence is deafening.

James R. Harrigan is Managing Director of the Center for Philosophy of Freedom at the University of Arizona, and the F.A. Hayek Distinguished Fellow at the Foundation for Economic Education. He is also co-host of the Words & Numbers podcast.

Dr. Antony Davies is the Milton Friedman Distinguished Fellow at FEE, associate professor of economics at Duquesne University, and co-host of the podcast, Words & Numbers.