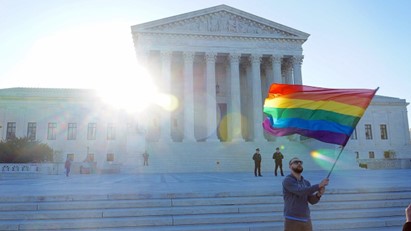 Until Congress Considers A Due Process Fix, Unelected SCOTUS Justices Will Keep Lawmaking

It is time to reconsider whether the court should ever use the due process guarantee to define a substantive right.

In the wake of the midterm elections, the Senate moved quickly to advance proposed legislation protecting same-sex marriage. The bill, known as the “Respect for Marriage Act,” is in response to concerns from leftist activists who fear the Supreme Court’s recent decision to overturn Roe v. Wade may set the stage for the reversal of the same-sex marriage right. Senate Majority Leader Chuck Schumer touted the recent bipartisan vote in support of the bill as a “truly bold step forward in the march toward greater justice [and] greater equality.”

A truly bold step — and one that is consistent with the much-maligned views of Justice Thomas — would be to amend the Constitution to end or reign in the Supreme Court’s involvement in these political controversies. Whatever one’s views on abortion or same-sex marriage, Americans across the political spectrum should be concerned that the Supreme Court continues to tinker with the idea that it has the power to define protected rights under the due process clause of the 14th Amendment.

This formidable power developed by the Supreme Court in various cases over many years has no clear standard to define how or when it may be applied. The justices in Dobbs were sharply divided as to whether the standard was to protect rights “deeply rooted in our history and tradition” (the majority) or to protect rights that emerge as the meaning of liberty evolves in response to “new societal understandings and conditions” (the dissent). Leaving this unchecked and unresolved authority in the hands of the court and its ever-shifting majorities is a proven recipe for endless controversy.

This is not to suggest that new rights cannot be protected by the Constitution without an amendment. Courts will continue to identify and protect procedural rights grounded in the due process guarantee, as well as substantive rights that may derive from equal protection, privileges and immunities, or other constitutional principles. But there is no question that using the due process guarantee to define new substantive rights has a tendency to encourage what Justice Samuel Alito called “freewheeling judicial policy making” by the court, with results that sidestep our democratic processes in ways that simply do not square with the constitutional separation of powers.

If we accept that the court can define entirely new constitutional rights based on nothing more than its understanding of “the right of all persons to enjoy liberty as we learn its meaning” (Obergefell v. Hodges), or if we agree that the court can invalidate legislative actions that offend its sense of how to construe liberty in light of “new societal understandings and conditions” (Dobbs dissent), we run afoul of the framer’s clear expectation that judges should not be disposed to affect a “substitution of their pleasure to that of the legislative body” (Federalist No. 78).

Finally, it bears noting that Roe and its prior related cases have disrupted our national politics in subtle but important ways. Between 1965 and 1973, the court actively developed and applied broad due process principles to protect so-called “rights” to contraceptives and abortion, revealing an extraordinary willingness and ability to define new rights on a national scale. Not surprisingly, that period correlates with an abrupt halt in the use of the constitutional amendment process as an abrupt and continuing disruption of the judicial confirmation process as the political alignment of the Supreme Court became one of the most contentious issues in American politics.

These adverse effects are the natural consequences of the court’s expanding exercise of political power without the necessary but cumbersome consensus requirements that burden elected representatives, and they demonstrate how entrusting such broad lawmaking power to a council of unelected, life-tenured, elite lawyers is plainly incompatible with the American ideal of popular self-governance.

It is time to reconsider whether the court should ever use the due process guarantee to define a substantive right and, if it should, to more clearly define the scope of its power and discretion to do so. The implications of allowing this judicial power to continue unchecked should be of concern to all Americans. It tarnishes the ideal of an independent and nonpartisan judiciary, stifles constitutional reform, destabilizes the balance of powers, and disempowers American voters and their elected representatives. These problems can only be exacerbated by renewed calls to pack the court with even more partisan judges, inviting an endless expansion to accommodate manufactured majorities.

The only true check on the court’s due process power is the superior power of Congress and the states to propose and ratify an amendment guided by the will of their respective electorates. Doing so will open the door to a more consistent and reliable understanding of how we protect emerging rights of national importance, including any such rights that may now rest entirely on the unstable footing of substantive due process.