Protection from the Admin State 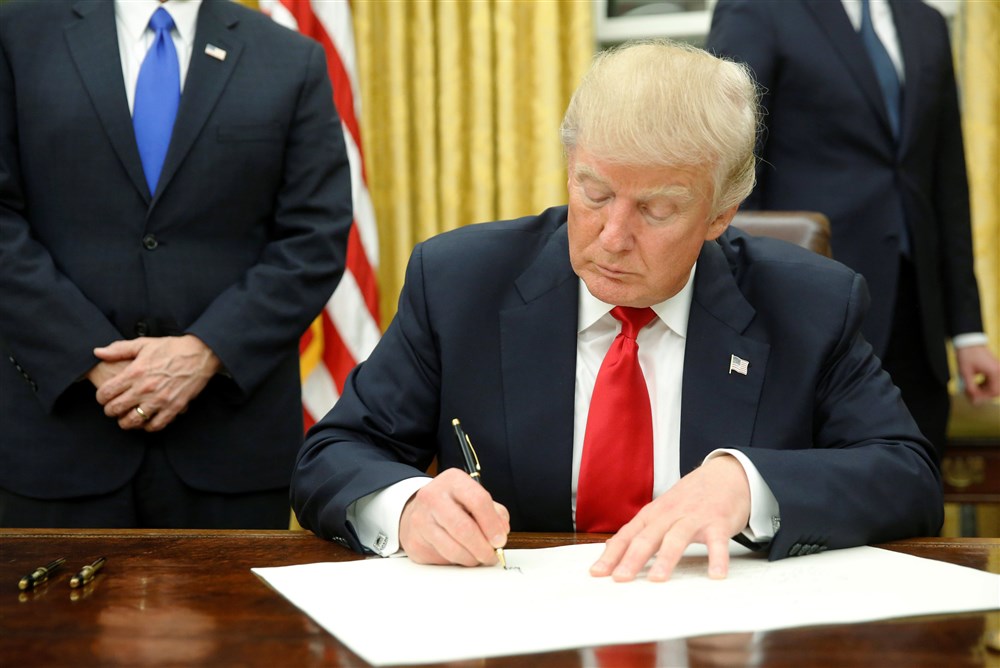 On Oct. 9, President Trump issued two executive orders that protect the public against unknown agency interpretations of the law that could cost them their money or their jobs, or that could land them in prison.

Washington may be burning with talk of impeachment, but President Donald Trump is not fiddling.

He’s continuing to deliver valuable results on regulatory reform. On Oct. 9, he issued two executive orders (here and here) that protect the public—the people, their employers, and their communities—against unknown agency interpretations of the law that could cost them their money or their jobs, or that could land them in prison.

These new orders go beyond deregulation and cutting red tape. They help to secure individual liberty through the advancement of timeless, nonpartisan principles, such as fair notice, due process, transparency, accountability, and rigorous, analytical decision-making.

The orders are a win-win—a win for good government and a win for the American people.

The goal of the orders is to fix the regulatory process by returning it to its original design. The president isn’t burning down the house; he’s restoring it.

The orders start with a discussion of constitutional principles and the 73-year-old statute designed to protect them during the regulatory process (the Administrative Procedure Act).

The orders then note that agencies have at times circumvented those principles, with the results that the public doesn’t always receive the notice it needs, the opportunity to participate that it deserves, and the complete analysis (including an assessment of benefits, costs, and alternatives, including non-regulatory ones) that it wants.

People of good will across the philosophical or political spectrum agree on the problem and much of the solution. See, for example, recommendations from the Administrative Conference of the United States. The president’s new executive orders are important steps toward addressing this persistent problem.

One of those orders requires each agency to create a user-friendly database of all guidance documents that the agency has issued and intends to keep. All others must be rescinded.

The second order prohibits agencies from bringing enforcement actions against private parties for violating standards announced solely in guidance documents, not in acts of Congress or regulations issued through the Administrative Procedure Act notice-and-comment process.

Together, the two orders allow agencies to use guidance documents for their original purpose; namely, explaining what the agency does or thinks a law or regulation means—without putting the public at risk of being accused of violating a secret agency “law.”

What does that mean going forward? Significant new guidance will have to be proposed, not just issued. The public will have an opportunity to comment and object during that proposal period.

Agencies cannot issue “significant” guidance memoranda—generally, ones with economic effects of $100 million or more, ones that raise important legal or policy issues, or ones that create inconsistency with other government programs—until the Office of Information and Regulatory Affairs within the White House’s Office of Management and Budget has the opportunity to review them.

The Office of Information and Regulatory Affairs has long reviewed those memoranda under Executive Order 12866, but the new executive orders operate as a belt-and-suspenders measure to ensure that no significant guidance documents evade review.

They also give a private party an additional basis for challenging a government enforcement action due to an agency’s failure to comply with the new orders.

The orders complement other recent nonpartisan reforms. For example, they build on prior efforts to ensure that the Office of Information and Regulatory Affairs can analyze rules (including guidance memoranda) to determine whether rules are “significant” for purposes of the Congressional Review Act.

They complement efforts to improve the quality of information used in regulatory decision-making and to incorporate the regulatory actions of the U.S. Treasury Department into the ordinary regulatory-review process at the Office of Information and Regulatory Affairs.

The Trump administration has successfully protected the public against regulatory overreach. According to the Office of Information and Regulatory Affairs, the administration imposed, on net, zero new regulatory costs during its first two years.

Trump and Congress also nullified more than a dozen agency rules via the Congressional Review Act, which allows Congress to “fast track” the repeal of rules. Finally, at last count, the administration removed or delayed some 1,500 unnecessary new regulations that were in the pipeline.

The president’s new executive orders are important additions to the substantive and procedural reforms already accomplished.

These actions aren’t about deregulation or cutting red tape, but are about reforming the regulatory process itself to make it fairer and more accountable to the people. These good government reforms are necessary, important, and worthy of celebration.

Anthony P. Campau is a visiting fellow in regulatory policy n the Thomas A. Roe Institute for Economic Policy Studies at The Heritage Foundation. Campau previously served as chief of staff and counselor of the Office of Information and Regulatory Affairs within the White House’s Office of Management and Budget.

Paul J. Larkin Jr. directs The Heritage Foundation’s project to counter abuse of the criminal law, particularly at the federal level, as senior legal research fellow in the Center for Legal and Judicial Studies. Read his research.