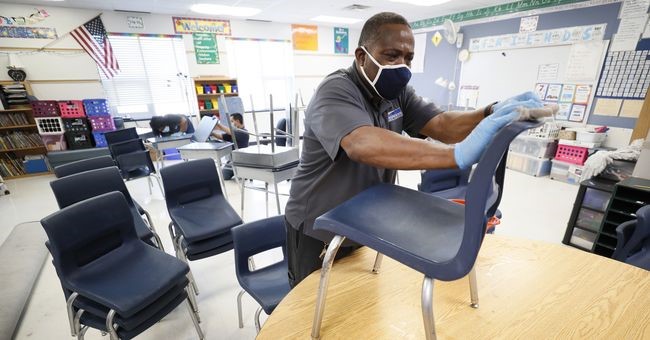 By The Editorial Board | 491 words

New York City Mayor Michael Mulgrew on Friday told parents to brace for another schools shutdown on Monday. Ok, he’s the teachers union chief, not the mayor. But he might as well be as Mayor Bill de Blasio follows his orders. Nice that they give parents a weekend’s warning on closures, but as usual they’re not thinking about the children.

Mr. de Blasio said Friday the city’s seven-day testing positive rate had hit 2.83% and is on the brink of exceeding the 3% threshold the city had set in the summer for shutting schools. This benchmark is based on the city population, not schools. Merely 0.074% of students have tested positive over the last two months, and 0.0011% on Nov. 11.

If New York City’s 1,126,000 million student population was its own metro region, it would have among the lowest per-capita case rates in the U.S. Only 955 of the 150,000 or so public school employees have tested positive since mid-September. Most evidence shows children are less likely to transmit the virus than adults, so schools are less likely to be sources of contagion than are the city’s restaurants or offices, which are still open.

Brown University economics professor Emily Oster, who has been tracking virus cases at a sample of schools with more than three million students and 422,000 staff, reports there have been substantially fewer cases among students and teachers than among local populations. No matter. Mr. Mulgrew asserted Thursday that “the virus will infiltrate the schools” and spread it around the city.

The union-ordered shutdown isn’t surprising since their last priority is children. Hence they fight ferociously to block charter school expansions and to keep bad teachers in classrooms. Reams of data show that closing schools in the spring has cost students substantially.

A recent Stanford University study of 19 states estimates that students lost on average between 57 to 183 days of learning in reading and 136 to 232 days in math during the spring closures. New York City students lost 122 days in reading and 209 in math—essentially a year of education in a few months.

These learning losses are why European countries are keeping schools open even as they lock down businesses again. A report from the United Kingdom found that reading comprehension scores among young students declined 15% in the last year. Scores for students from the lowest-income schools dropped nearly twice as much in vocabulary and grammar as in the wealthiest.

Researchers at the University of Pennsylvania estimate that lower education quality during schools’ closures “costs current students between $12,000 and $15,000 in future earnings, varying by age. By October 1, 2020, we project students in grades 1-12 had lost between $43,000 and $57,000, or 4 to 5 percent of their lifetime wage earnings.”