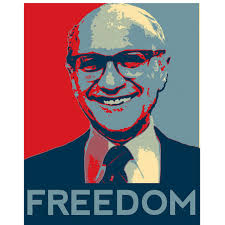 American economist Milton Friedman rose to prominence in the second half of the 20th century as one of the leading critics of the prevailing economic theories of John Maynard Keynes, whose mixed economy model became the standard for many developed nations during and after the World War II-era.

Born in Brooklyn to a Jewish family of modest means in 1912, Friedman distinguished himself scholastically at a young age. After graduating high school at age 16, he attended Rutgers University where he studied math and economics. He continued his education at the University of Chicago, where he received an MA in economics and would ultimately retire in 1977 after more than 30 years of teaching—a year after receiving the Nobel Prize for his contributions to economic science. Friedman continued writing and speaking publicly through various mediums—magazine columns and television, academic journals and newspaper op-eds—until his death in 2006.

The Economist has described Friedman as “a giant among economists” and “the most influential economist of the second half of the 20th century.” Here are 12 things he said to serve as food for thought:

Jonathan Miltimore is the Managing Editor of FEE.org. His writing/reporting has appeared in TIME magazine, The Wall Street Journal, CNN, Forbes, Fox News, and the Washington Times.