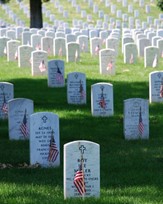 This Day in History: The origins of Memorial Day, shrouded in mystery

On this day in 1971, Memorial Day is observed on a new date. If you don’t know much about the history of this weekend’s holiday, then you are not alone. To some degree, its origins remain shrouded in mystery.

It all began with the Civil War—the deadliest conflict in American history. More than 600,000 soldiers were killed, and those deaths left gaping holes in communities. Americans all over the country began holding springtime tributes to their fallen soldiers. Soon, some of these tributes started to become more formal.

Would you believe that at least 25 cities claim that *their* observances were the ones that started it all?!

Waterloo, New York, is one such city. On May 5, 1866, the city may have held an observance in which all businesses were closed so citizens could honor the war dead. A century later, both a congressional resolution and a presidential proclamation would recognize Waterloo as the official birthplace of Memorial Day.

Perhaps they acted in haste? Since then, researchers have uncovered information that casts doubt on the federal designation. Potentially, a simple mistake in an 1883 newspaper article was the source of all the trouble.

Columbus, Georgia, is another city that may have started the holiday. A widow there wrote a letter that was published in many local newspapers. She urged Southerners to set aside one day to put flowers on the graves of the fallen. The letter pushed many people into action—including (confusingly) some ladies in another city named Columbus: Columbus, Mississippi. Those ladies possibly held the very first observance of Memorial Day, laying flowers on the graves of *both* Union and Confederate soldiers.

Naturally, not every observance during those years would honor both sides. Union and Confederate versions of the holiday could still vary for years afterwards.

Another interesting question revolves around the date that was ultimately chosen for Memorial Day. General John A. Logan of the Grand Army of the Republic was the first to issue a call for a national day of remembrance. “The 30th day of May (1868),” he stated, “is designated for the purpose of strewing with flowers, or otherwise decorating the graves of comrades who died in defense of their country during the late Rebellion . . . .”

Some believe Logan chose May 30 because it wasn’t the anniversary of any particular Civil War battle. Others say the date has more to do with the availability of flowers by late May. Some say he was just co-opting traditions that had begun in the South—or even that he was influenced by the fact that May 30 fell on a Saturday that year.

Whatever his motivation, Logan’s call for a “Decoration Day” pressed many into action. Over time, various traditions merged: More and more states adopted the May 30 date. The name “Decoration Day” was dropped in favor of “Memorial Day.” Then World War I adjusted the holiday yet again: Members of the military lost in *all* wars (not just the Civil War) would be remembered.

Finally, the Uniform Monday Holiday Act would ensure one last change: Since 1971, Memorial Day has been observed on the last Monday in May instead of May 30.

“The willingness of some to give their lives so that others might live,” President Ronald Reagan would later say, “never fails to evoke in us a sense of wonder and mystery. . . . let us pledge that their lives, their sacrifices, their valor shall be justified and remembered for as long as God gives life to this nation.”