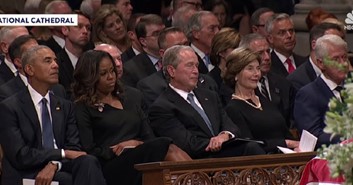 If ever there was a time when constructive criticism was urgently required, it is now, in the summer of America’s deepening discontent.  One thing to criticize is that we are fast becoming an oligarchy, something hidden behind ostensible political battles that distract us, something Jefferson warned of 240 years ago.

Currently, the shiny object we are being funneled to focus upon is the Mar-a-Lago raid.  We cannot take our eyes off it, even as Attorney General Merrick Garland and FBI director Christopher Wray tell us to stop criticizing our betters in government even as they shred the U.S. Constitution and the Bill of Rights.  Meanwhile, the RINOs tut-tut about the president of the United States, who has plenary power to declassify anything, possessing “classified” and “top secret” documents.

The United Negro College Fund used to have a great slogan: “A Mind is a Terrible Thing to Waste.”  That truism tells us that the torrents of nonsense from Wray, Garland, Barr, and other elite, and corrupt, solons must be rejected.  When they are, they will be rejected, peaceably, in the elections of 2022 and 2024 — vigorously, even raucously, but certainly not violently.

Currently, self-appointed elites are canceling the legacies of America’s Founders, ignoring that the American Revolution and the nation it created did so much more for people worldwide than the project to surrender nationhood to unelected boffins at the United Nations and World Economic Forum has done.

Besides, the spirit of the times may alter, will alter. Our rulers will become corrupt, our people careless. A single zealot may commence persecutor, and better men be his victims.

Rivals on many issues — progressives and conservatives — likely agree that tyranny under a surveillance state is not an American ideal.  That’s why, the more we learn about the raid on Mar-a-Lago, the more all of us should be terrified as tyranny seemingly has come to infect the American body politic.  The assault upon a popular, mega-rich former president was likely another step in the plot to destroy those who reject ruinous unregulated globalism and to stifle a reckoning, through the courts and at the polls, that is long overdue.

What the Biden-Harris administration did at Mar-a-Lago may only be a taste of what it ultimately does to us all, whether we are Trump-supporters or simply proud to be free and independent Americans rather than serfs to the international and fake Illuminati.  Again, Jefferson warned us in 1782 about elite cabals:

From the conclusion of this war we shall be going down hill. It will not then be necessary to resort every moment to the people for support. They will be forgotten, therefore, and their rights disregarded. They will forget themselves, but in the sole faculty of making money, and will never think of uniting to effect a due respect for their rights. The shackles, therefore, which shall not be knocked off at the conclusion of this war, will remain on us long, will be made heavier and heavier, till our rights shall revive or expire in a convulsion.

The public record suggests that the DOJ and FBI have long been manipulating information, alternately advancing lies or hiding truths, in a way that has denied us a true contest of ideals between Bernie Sanders–style “progressivism” and Donald Trump-style “conservatism.”  Our nation has not truly hashed out competing yearnings.

Kabuki political battles obscure what should be a common cause unaffected by corrupt interests: encouraging gainful employment in the private sector and shrinking ineffective and corrupt government.  With regular and increasing incomes, and by serving customers with ever-improving products and services, we will win back enough shared prosperity to rebalance the nation’s finances and secure fortunes for workers and for prudent investors.

Rather than being distracted by trifling offenses, those who truly care about this nation and its great potential as a law-abiding growth engine for the world must re-examine how donors profited under the influence extended by dynastic political families, especially the Clintons, the Bushes, the Obamas, the Pelosis, the McConnells, the Bidens, and the Trumps from 1992 to the present.

Lincoln perfectly articulated that our Founders intended government to be by the people and for the people.  Government should never be for the benefit of a gaggle of spendthrifts who rule without insight and believe their abject failures will never loosen their grips on power.

Hidden packets on the internet are mightier than the sword.  If we find and unscramble as much missing information as we can concerning political payoffs over three decades (at least), afterward we may understand why insiders tried to sell all of us out to corrupt foreign and domestic interests for a song.  Then we shall vote, and only then may an independent America prevail.