On this day in 1786, George Washington writes a letter on a difficult topic. His views on slavery had been changing for many years.

Perhaps unfortunately for him, his new perspective on slavery was making it difficult for him to settle a debt. 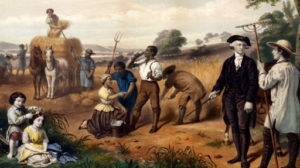 The estate of John Mercer owed him money. An attempt was made to pay off part of that debt by giving him some slaves, but Washington did not want that. Instead, he noted his reluctance to own any more slaves than he already had. He wrote:

“I never mean (unless some particular circumstances should compel me to it) to possess another slave by purchase; it being among my first wishes to see some plan adopted, by the legislature by which slavery in this Country may be abolished by slow, sure, & imperceptable degrees.”

It is fashionable in some quarters today to blast our Founders as evil slave owners, but such a perspective is incomplete. Washington and our other Founders were born into a world where slavery was normal. DESPITE that handicap, many of them began to see the inconsistencies between the Revolution they were fighting and the institution of slavery.

Washington himself wrestled with the subject for years, although he never took a public stance against slavery. Should he have done so? Some scholars speculate that he never did take a public position because he was worried about breaking up the Union before it ever got off the ground.

Either way, Washington’s views were changing, and his actions reflected this evolving perspective. He quit selling slaves without their permission. He would not break up families, even when he had too many slaves and ran into cost inefficiencies at Mount Vernon. He softened his position on allowing black men to serve in the Continental Army during the Revolution. He met with the first black American poet, even giving her the respectful title, “Miss Phillis.”

Towards the end of his life, he would speak of slavery as the “only unavoidable subject of regret” in his life. Maybe it is unsurprising that he freed his slaves in his will?

None of us are perfect, and I suspect future generations will find plenty wrong with the things that we have done. But I hope they will also find things that we did right.

One thing that the Founders did right: Fifty-five of them met in a room in Philadelphia. They were learned men, students of history. They had studied various political systems. They were free from partisan interests. (Their biggest bias was in favor of their own states.) They lived at a unique point in history, and they came together with the goal of creating a uniquely successful government. And they did just that. In this author’s opinion, we do our country a disservice when we ignore the good things that these men did because we wish that they had overcome one (really) big flaw more quickly.

At the end of the day, don’t we think that our generation has made similar leaps?

Presumably, George Washington and his peers would feel the exact same way.