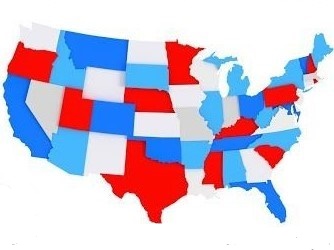 Ways to fight back against the Radical Left

Those who believed that all it took for the radical left to force their agenda onto America was for Democrats to hold the White House, a tiny majority in the House and a tie in the Senate should remember that despite the left’s efforts to create an all-powerful federal government, in the United States, the government still derives its power from the consent of the governed. And if enough Americans don’t give their consent, then we have ways to fight back.

One way is through the courts. We are seeing a lot of legal challenges to Biden’s executive orders and regulatory overreach. And some are succeeding: the Supreme Court just unanimously struck down the idea of warrantless gun confiscation. Even if they’d stacked the Court with four more liberal activists, they still would’ve lost that one 9-4.

But another way is through pushback by local and state governments. Liberals see the US as a supreme federal government with subservient state and local governments far below. They forget that they upended that notion themselves when they started the “sanctuary state and city” and the legalizing marijuana movements, both in defiance of federal law. Using their own precedents, after just a few months of disastrous Biden policies, states are already refusing to cooperate in their own destruction.

Here are just a few of the latest examples:

Tennessee just became the second state (after Arkansas) to ban dangerous, experimental hormone treatments for prepubescent children who think they’re transgender. This kind of “doctors playing God” practice used to be considered monstrous before the Democrats went all-in on the LBGTQ+++ agenda. Now, some formerly cowed medical experts are finally starting to speak up, and even some European nations and hospitals are saying no to using children as guinea pigs.

South Carolina’s Governor just signed an open-carry bill into law, allowing permitted gun owners to carry weapons openly in public. This is part of an overall growing trend to protect the Second Amendment on the state level.

Nearly a dozen states are working on bills to ban racist and Marxist “Critical Race Theory” from schools. The Governors of Texas and Florida seem to be competing to see who can defend personal liberty from leftist federal tyranny the most. And in the most encouraging news of the day, Pennsylvania voters just approved two Constitutional amendments taking away the Governor’s ability to use emergency disaster declarations to assert unlimited power over the people’s rights and freedoms.

The Republican legislature tried to rein in Democrat Gov. Tom Wolf’s endless COVID lockdowns, which they say have crippled the state’s economy and destroyed jobs, but he vetoed them, which required a two-thirds vote to override. But under the new amendments, the Governor can only declare a disaster emergency for 21 days, not 90 days. After 21 days, the legislature has to vote to extend it. And a simple majority of the legislature can now terminate an emergency declaration at any time. (Wolf just extended his emergency declaration yet again, two days after the vote, so the voters’ message obviously didn’t sink in.)

Amazingly, Wolf accused Republicans of a “thinly-veiled power grab” for backing taking unlimited power away from one man and spreading it evenly among many elected representatives of the people in two branches of government. I’d say his beef is with the voters. We’ll see what they have to say in the 2022 gubernatorial election.