Myth: Most states are ignored by presidential campaigns because of the Electoral College. Only swing states matter. A direct election system would fix this.

Fact: There are two reasons why this perception is incorrect.

First, an honest assessment of American history shows that no state is permanently “safe” or “swing.” The identity of these states changes all the time. In recent years, we’ve heard a fair amount of commentary about “new” swing states such as Virginia or North Carolina. We even hear talk this year that Utah is competitive, with third party candidates Evan McMullin and Gary Johnson showing surprising strength.

Remember that Texas used to vote Democratic. California used to vote Republican. George W. Bush won his victory in 2000 with the help of one state that was supposed to be a safe blue state: West Virginia. A whole slew of southern states voted for Bill Clinton, but they never voted for Barack Obama. In other words, even if “only swing states matter,” these states are constantly changing. 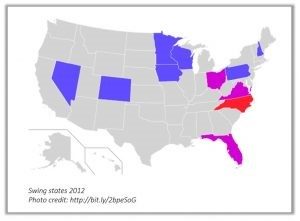 Second, presidential elections are not only about the TV commercials and campaign visits in the final weeks and months leading into Election Day.  Presidential elections are as much about the four years of governance before the election as they are about the final commercials. How did California voters react when President Barack Obama decided not to allow construction of the Keystone Pipeline? How did Texas voters react when President George W. Bush issued his executive order prohibiting the use of federal funds for certain types of embryonic stem cell research? How many voters will not vote for Hillary Clinton under any circumstance because of Benghazi? How many voters are bound and determined to vote Democrat because they want to protect Obamacare? Such decisions and their ramifications are part of governing, but they are also at least a part of “campaigning.” They do as much as a TV commercial (if not more) to influence voting decisions—as candidates and incumbents certainly know.

In short, “safe” states are not being ignored.  They have simply already made up their minds based upon the years of decisions that preceded the election. When a state ceases to be satisfied, it quickly lets its political party—and the world!—know. Such states either become safe for the opposite political party (as West Virginia did following the election of 2000) or they become a new swing state (as Virginia recently has).

At the end of the day, political parties and presidential candidates can’t ever ignore any state unless they want to risk losing that state’s electoral votes.

Please don’t miss my new kids’ illustrated book about the Electoral College!
Signed copies available at the bottom of THIS PAGE.

If you have Amazon Prime, shipping will be much cheaper with (unsigned) copies HERE.

This entry was posted in Electoral College resources. Bookmark the permalink.