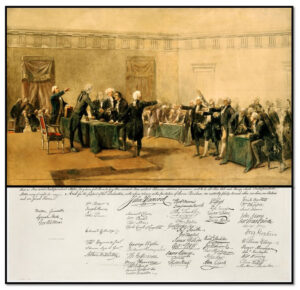 Signers of the Declaration

On this day in 1811, a signer of the Declaration of Independence writes a letter. Benjamin Rush had put his life on the line when he signed that document, of course. If caught by the King, he would have been hanged for treason.

He—and each of the other signers—was keenly aware of that fact.

“Do you recollect the pensive and awful silence which pervaded the house,” Rush wrote, “when we were called up, one after another, to the table of the President of Congress, to subscribe what was believed by many at that time to be our own death warrants?”

The tension was palpable, as Rush described it, interrupted “only for a moment by Col: Harrison of Virginia who said to Mr Gerry at the table, ‘I shall have a great advantage over you Mr: Gerry when we are all hung for what we are now doing. From the size and weight of my body I shall die in a few minutes, but from the lightness of your body you will dance in the air an hour or two before you are dead.’”

The joke prompted fleeting smiles, as Rush described it, but the solemn atmosphere soon returned.

Can any of us ever really understand what it was like to be one of those men who put their lives on the line during the summer of 1776?

The author of the Declaration, Thomas Jefferson, was so gripped by what he’d done that he included it on his self-written epitaph. He didn’t mention his presidency. 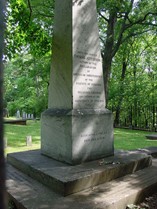 AND FATHER OF THE

Perhaps Jefferson wasn’t the only signer who thought that his participation in American independence defined a critical moment in his life? He and John Adams were both critical to adoption of the Declaration. Both men passed away on the 50th anniversary of that world-changing event.

It’s been speculated that both men were waiting for that anniversary before they let themselves die.

Jefferson asked, late on the night of July 3, 1826, “Is it the 4th?” When he received a negative answer, he waited a bit. After midnight, he asked again: “Is it the 4th?” Adams, too, seemed to be waiting. A few days before his death, he was asked for a toast that could be “presented on the Fourth of July as coming from him.” His answer? “Independence forever!” Would he add anything to it? “Not a word,” said Adams.

After their deaths, Daniel Webster gave a eulogy for these distinguished Patriots: “It cannot but seem striking and extraordinary, that these two should live to see the fiftieth year from the date of that act / that they should complete that year/ and that then, on the day which had fast linked for ever their own fame with their country’s glory, the heavens should open to receive them both at once. As their lives themselves were the gifts of Providence, who is not willing to recognize in their happy termination, as well as in their long continuance, proofs that our country and its benefactors are objects of His care?”

Many in our founding generation agreed.

Perhaps today is a good day to remember the providential care given and the sacrifices made nearly 250 years ago?

Fifty-five men risked their lives in a way that few of us can understand today. They put their name on a document, the likes of which the world had never seen. They did it because of their deep conviction that a Creator has given mankind the right to life, liberty, and the pursuit of happiness. Kings and Queens are not the bosses of us.

One does have to wonder what our founding generation would think of America today.

More stories about Signers of the Declaration can be found on my website, HERE.