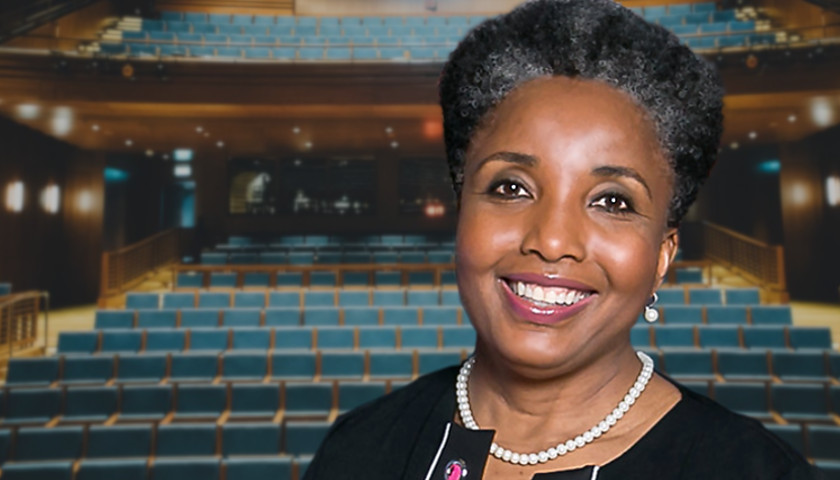 Critical Race Theory training, which pressures people not to say certain things, take a certain stance, or forces them into some segregated settings, may infringe on people’s constitutional rights and even violate civil rights laws, said Dr. Carol Swain, a former professor of political science and law at Princeton and Vanderbilt universities.

The main tenet of Critical Race Theory (CRT) is that the people of the world are divided into oppressors and oppressed, and in the United States, “all white people are considered oppressors who benefit from undeserved advantages,” Swain told The Epoch Times in an interview on EpochTV’s “Crossroads” program.

“[Whites] are deemed guilty of having set up a system of systemic racism,” she said of one main assumption being drawn from CRT. “The demonization of one group of people because of the color of their skin is something that is discriminatory.”

A lot of white people who are forced into CRT-based training, and forced to confess to being racist because of their race, do not realize that they are protected by the Civil Rights Act of 1964 that prohibits discrimination on the basis of race, color, national origin, religion, and disability, explained the retired professor.

White people are protected in the same way that black people are by civil rights laws, she said. “We’re not a country where it’s acceptable to bully and shame people because of the color of their skin.”

Such acts create a hostile environment at work or may cause psychological harm to children at school, the award-winning author explained, adding that parents have reported depression, trauma, or other problems in their children who had been told that, because of their whiteness or the fact that their ancestors inflicted harm, they are also guilty of oppression.

Moreover, the Equal Protection Clause of the 14th Amendment of the United States Constitution guarantees certain protections to all people, even non-citizens.

If a public institution such as a school tries to restrict people’s speech or behavior, it may be also a First Amendment violation, Swain said.

Private schools have more freedom to discriminate than public ones, but students whose rights are infringed can use other bases, such as the student handbook that guarantees students certain rights, to fight discrimination, she added.

Swain suggested that students facing discrimination can also seek help from organizations defending students’ or individuals’ freedom of speech, association, and religious liberty, such as The Foundation for Individual Rights in Education (FIRE) or the Christian Legal Society.

Another way to counter discrimination at schools is publicity, the professor advised. Students can write articles about discrimination cases and publish them in student media like The College Fix or Campus Reform as there have been cases of universities backing down due to the public outcry over the reports of unfair treatment, according to Swain.

She also recommended that students “always document things that are discriminatory and use that evidence when the time is right.”

“I think America has been so important to the world, that the true history of its founding, as well as the mistakes that were made and just how we address those mistakes, are things that enrich people. And it is something that should not be hidden, and certainly not something that would be a cause of shame,” Swain told Crossroads.

“The true story of America is a story of blacks and whites working together to overcome that tragic part of our history.”

During the period following the end of slavery, “it was white philanthropy that set up schools across the South, that set up those historically black colleges and universities, and trillions of dollars have been donated since the end of slavery to try to address the past and present effects of slavery,” explained the co-chairwoman for former President Donald Trump’s 1776 Commission.

The civil rights movement itself is a moment in history where whites, blacks, people of other races and ethnicities came together for a cause. “That was powerful,” she continued.

Swain was born during the time of “systemic racism” in the segregated South. She witnessed the collapse of institutional racism and benefited from the opportunities created for black Americans like herself.

“My love of country came about because when I was in school, we were taught civics and patriotism. And I felt like I lived in the greatest nation in the world,” Swain said.

Racism was dying in the United States before President Barack Obama was elected, she said. At that time, the country was portrayed by legacy media as being a post-racial society. “I think that because we were making so much progress, the political left and those that benefit by racism and keeping us divided … they had to act.”

This was the time when the racial tensions, which divided people, restarted and when standards in classes, especially in public schools, were lowered owing to CRT and the restorative justice agenda being pushed, she added.

Opportunities for black people have never been better than today and ultimately, success depends on a person’s attitude, she said.

Swain shared that as one of 12 children, she had dropped out of high school, married at 16, and had three small children by the time she was 21. Despite that, she went back to school, got a high school equivalency, and went to a community college where she got the first of her degrees.

She pointed out that she was able to achieve success and overcome the circumstances of her birth because she believed that hard work mattered and applied herself as such.

“I did not see myself as handicapped because I was black, poor, a woman,” the professor said. “I took advantage of what America offered.”

Among today’s youth, minorities are being “crippled in their minds because they’ve been told by the political left what they can’t do and they are being handicapped,” she warned.

“They’re not even being held to the same standards that people of my generation were held to at colleges and universities. And as a consequence, they do feel inferior. A lot of what is crippling them is what they have been indoctrinated with.”

In her view, the racism coming from the political left is a forced re-segregation, and the lowered standards being pushed out for racial, ethnic minorities are impeding the development of their fullest potential.

Inciting racism serves the political interests of the Democrats who use the CRT to sow divisions between races in order to secure the black votes that they need to maintain their power, Swain said.

Any time some progress is made with race relations, an incident is found “to play up in the media to get Americans all worked up and divided by race. And it’s very easy to do because there’s always something happening somewhere,” she added.

She pointed to the many incidents like police shootings that have been played up by the media, acting to inflame people’s emotions and distract the public “during a time when there’s something in the news that is not favorable to the progressive agenda.”

It makes black people keep feeling like there is so much racism and blames Republicans or white people for being guilty of this racism, Swain continued.

“They are creating a very dangerous situation in this country because they’re demonizing all white people, including themselves and their own children,” she said, adding that hatred, once unleashed, cannot be easily “put back in the box.”

Black Lives Matter (BLM), an openly Marxist organization, was able to capitalize on the public’s reaction to George Floyd’s death and raise millions of dollars for progressive black causes, Swain said. People around the world who care about black people were shocked by the video of Floyd’s death, which was played over and over again in the news and many then donated money to the organization because they believed in the slogan “Black Lives Matter.”

“Black lives do matter, all lives matter,” she said. But “that money did not go into black communities. It didn’t change black lives.”

The Epoch Times has reached out to Black Lives Matter for comment.

Swain went on to encourage Americans to counter the negative impact of CRT by becoming informed about CRT and “where it comes from, and how it operates, and how it’s contrary to the Constitution, and the Equal Protection Clause and civil rights laws.”

“If people become equipped by knowledge and have the courage to stand up on principle, to fight for principles they believe in, there’s no way that this radical agenda can take down our nation,” she said.

“You should know the truth and the truth shall make you free,” Swain said, citing the Bible.

If people, however, allow CRT to advance through the nation’s institutions of power and reshape the way the society functions, then state-sanctioned discrimination will soon be instituted by the U.S. government—by the highest echelons of power—weakening and destroying the nation from within, she warned.