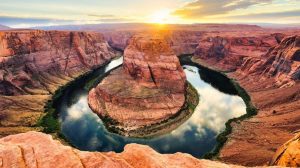 State Over Federal Power: The 100th Anniversary of the Colorado River Commission

The Colorado River Compact is familiar primarily to those living in the American West. But the Colorado River Commission was a landmark event for all Americans. It was a major triumph of state over federal power. Its negotiations served as a model for later compacts that resolved uncertainties as the states wanted them resolved, rather than how Congress might dictate.

The Colorado River and the Threat of Federal Intervention

Examine a map of the lower 48 states. Bisecting the map from north to south is the 100th meridian of west longitude. East of the 100th meridian, rainfall, snow, and streams supply water for lush woodlands, human consumption, and agriculture. But west of that line (aside from the rainforests of the Pacific Northwest), water is relatively scarce. Huge amounts of snow dump on the Rocky Mountains and Sierra Nevada in winter and early spring, but when warm weather comes, the snowmelt pours down sparsely placed streams to the ocean, bypassing most Western land.

Among the most important of the western streams is the Colorado River. Most of its water originates in Rocky Mountain snowmelt within the State of Colorado. Exiting the state from the west, the river flows into Utah and then into northern Arizona. Proceeding southwest through the Grand Canyon, it eventually forms Arizona’s border with, first, Nevada and, next, California. Then it continues into Mexico, eventually reaching the Gulf of California between the Baja peninsula and the rest of Mexico. 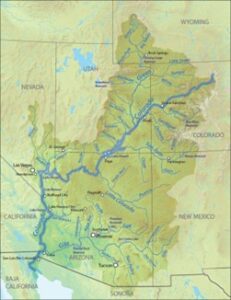 The Colorado River is of supreme importance to the arid lands of the West. In the 19th century, settlers started to divert its waters for agriculture, ranching, human consumption, and recreation.

During the late 19th and early 20th centuries, the inhabitants of the Colorado River watershed argued about how to allocate the river’s water. Those living in downstream states contended that Colorado must share it with them. Many Coloradans believed thatbecause the river originated in their state, they should be able to use as much as they wished. However, in a 1907 case involving the Arkansas River, the Supreme Court came down on the side of sharing.

The next big question was: When it came time to allocate the waters of the Colorado, who will do the allocating? Everyone knew that if the affected states could not agree, Congress would step in. Nor would this be a usurpation: At the time the Constitution’s limits on congressional power were still respected, and the document grants Congress power to “regulate Commerce … among the several States” (Article I, Section 8, Clause 3). This power always has been understood to include authority over navigable rivers.

Delphus E. Carpenter was Colorado’s foremost water lawyer. He practiced law in Denver, but he had been born in Greeley, a town benefiting from an irrigation system fed by Rocky Mountain snowmelt. He believed Western streams should be allocated by Westerners.

Carpenter pointed out that the Constitution reserved to the states the prerogative, with the consent of Congress, of entering into compacts (contracts) among themselves (Article I, Section 10, Clause 3). In 1920, he began to urge the affected states to negotiate a Colorado River settlement of their own. The affected states were the five already mentioned (Arizona, California, Colorado, Nevada, and Utah) and New Mexico and Wyoming, the sources of some of the Colorado River’s tributary streams.

It took time, effort, and patience to convince seven states to meet together at the same time and place to discuss the same topic. One reason was that they had lost the habit: The last convention of states had been held in 1889. Moreover, six of the seven Colorado River states had never attended such a convention, and the other (Colorado) had attended only the 1889 conclave.

Yet Carpenter was persuasive, and the threat of federal intervention was even more so. On Jan. 21, 1922, one representative from each of the seven states convened in Washington, D.C. to begin negotiations. Carpenter himself represented Colorado.

The Colorado River Convention of States 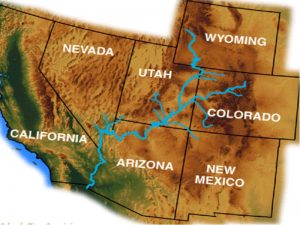 Conventions of states are meetings of delegations of commissioners from participating states, with each state accorded sovereign equality. In American history there have been over 40 such conventions, although some have been known by other names. The Colorado River assembly, for example, called itself a “commission.” Nevertheless, it was a true convention of states and followed traditional convention protocols:

As some other interstate conventions have done, the group decided to add another sovereignty to its deliberations. The commissioners asked the federal government to participate. They did so because they understood that the Constitution required congressional approval of any proposed interstate compact.

Herbert Hoover is remembered as an unsuccessful president, but his previous career had been outstanding. He was an internationally famous engineer who had become even more famous for his brilliant organization of relief efforts in Europe during and after World War I. When President Warren Harding took office in 1921, he designated Hoover as his Secretary of Commerce—and then named him as the federal government’s representative on the Colorado River Commission.

In recognition of Hoover’s stature, the other commissioners elected him to chair the meetings. The Colorado River Commission thereby became the third convention of states chaired by a future or former president of the United States. (The others were the 1787 Constitutional Convention, presided over by future President George Washington, and the 1861 Washington Conference Convention, chaired by former President John Tyler.)

The convention adjourned periodically to allow experts, primarily engineers, to develop proposals for water allocation. After holding seven sessions in Washington D.C., it moved to Phoenix for the eighth session and to Denver for the ninth. For all the remaining 18 sessions, the convention met near Santa Fe, New Mexico. Several years ago, I posted the unified minutes from all 27 sessions on the internet—something no one ever had done before. The collection consists of two batches of minutes (first through 18th session and 19th through 27th session), all placed in a single series. You can read them here (pdf).

The commissioners wrapped up their work on Nov. 24, 1922, after successfully forging a water allocation agreement. All seven states, as well as Congress, eventually approved it. One hundred years later, the Colorado River Compact is still in effect.

For several ensuing decades, states continued to negotiate water compacts through interstate conventions. In late 1928 and early 1929, Colorado, New Mexico, and Texas negotiated a temporary compact allocating waters of the Rio Grande River. (Delph Carpenter represented Colorado.) In 1937, the same states met in convention and hammered out the permanent Rio Grande compact. You can read about those meetings here.

On May 31, 2022, I arrived at my Independence Institute office in Denver. I found that an unknown person had left an old law book leaning on my office door—presumably as a gift. The book, compiled in 1908, was a rules and practice manual for members of Congress.

I examined the book’s spine. At the bottom was the impression, in gold letters, of the lawyer who first owned it. It read: