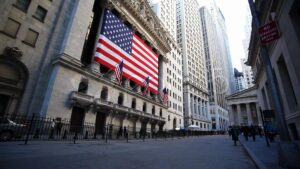 ‘We want to do for charities what WinRed has done for political giving, which is allow millions of smaller donors to have an impact.’

Frustrated by big banks embracing Environmental, Social and Governance (ESG) standards to the detriment of conservative values and working-class families, a team of prominent Republican operatives is capitalizing on the need to build new institutions able to compete with elite hostility.

Rob Collins, a Republican lobbyist and former executive director of the National Republican Senatorial Committee (NRSC), is part of the new venture called “Coign” (pronounced “coin”). He told The Federalist its credit cards will be ready to consumers with no annual fee “within weeks” and ready to facilitate transactions. While Collins said the company was ahead, its official launch remains at the mercy of industry supply chain woes that are currently restricting access to microchips.

The card offers 1 percent unlimited cash back on all purchases to entice consumers to sign up. A portion of corporate profits will be sent to organizations working on issues important to right-of-center voters. Three different designs will be available.

“Conservatives are using their cards, and that adds up to billions and billions of dollars in commerce that have been used to undermine the things we believe in,” Collins said. His business partners include high-profile names such as former Colorado Sen. Cory Gardner and Republican strategist Chris Hansen, according to the Washington Examiner. “When we’re all chopped up into different cards and accounts, it’s easy to roll over us.”

While no one event motivated Collins to move on the project, the start-up founder who helped Republicans recapture the Senate in 2014 said it was born out of frustration conservatives were “treated as a fringe movement in the public square.”

“We’re the biggest ideological group in America, but we don’t act like it and we don’t get treated that way,” Collins said, who began research for the new venture two years ago as the financial industry slowly crept into the center of the culture wars.

In 2019, JPMorgan Chase was accused of purging the accounts of conservative activists. The bank denied the allegations, but two years later froze donations to Republicans who contested the 2020 election outcome.

The company was also caught last year refusing service to a conservative group over an event that featured Donald Trump Jr. According to Fox Business, the bank cited its terms of service which barred business with anyone who promotes “hate, violence, racial intolerance, terrorism, the financial exploitation of a crime[.]” JPMorgan Chase only reversed course after a threat from Missouri Republican Treasurer Scott Fitzpatrick to cut off state business from CEO Jamie Dimon’s financial empire.

In West Virginia, Republican Treasurer Riley Moore already pulled the trigger on eliminating the state’s relationship with BlackRock over the firm’s animosity towards fossil fuels and commitment to Communist China.

“As the state’s chief financial officer and chairman of the Board of Treasury Investments, I have a duty to ensure that taxpayer dollars are managed in a responsible, financially sound fashion which reflects the best interests of our state and country,” Moore said in a press release announcing the decision. “I believe doing business with BlackRock runs contrary to that duty.”

Moore also led a coalition of 15 states pledging to park $600 billion in taxpayer assets elsewhere from firms that refuse investment in fossil fuels to comply with ESG standards of net-zero emissions. Wall Street’s refusal to invest in the capital- and labor-intensive industry has been a primary obstacle to domestic energy production while hampering growth in states with abundant natural resources.

Ellen Wald, a senior fellow at the Atlantic Council’s Global Energy Center, described Wall Street’s financial activism offering services based on left-wing standards of morality as a “new version of redlining” in The Hill.

While specific charities that stand to benefit from Coign have yet to be announced, Collins said groups working on issues related to veterans, education, and religious freedom are examples of organizations that might be chose. He added that list was far from exhaustive. Card holders will be able to vote for different charities on a regular basis, with options based on non-profits’ transparency and effectiveness.

“We want to do for charities what WinRed has done for political giving, which is allow millions of smaller donors to have an impact,” Collins said about opening a new avenue open for silent conservatives to make their voices heard without a major commitment.

Tristan Justice is the western correspondent for The Federalist. He has also written for The Washington Examiner and The Daily Signal. His work has also been featured in Real Clear Politics and Fox News. Tristan graduated from George Washington University where he majored in political science and minored in journalism. Follow him on Twitter at @JusticeTristan or contact him at Tristan@thefederalist.com.