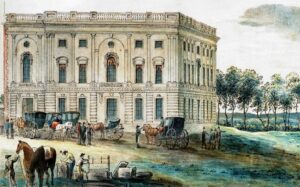 Church in the U.S. Capitol

Many people are surprised to learn that the United States Capitol regularly served as a church building; a practice that began even before Congress officially moved into the building and lasted until well after the Civil War. Below is a brief history of the Capitol’s use as a church, and some of the prominent individuals who attended services there.

The cornerstone of the Capitol was laid by President George Washington in 1793., but it was not until the end of 1800 that Congress actually moved into the building. According to the congressional records for late November of 1800, Congress spent the first few weeks organizing the Capitol rooms, committees, locations, etc. Then, on December 4, 1800, Congress approved the use of the Capitol building as a church building. 1

Significantly, the Capitol building had been used as a church even for years before it was occupied by Congress. The cornerstone for the Capitol had been laid on September 18, 1793; two years later while still under construction, the July 2, 1795, Federal Orrery newspaper of Boston reported:

City of Washington, June 19. It is with much pleasure that we discover the rising consequence of our infant city. Public worship is now regularly administered at the Capitol, every Sunday morning, at 11 o’clock by the Reverend Mr. Ralph. 2

The reason for the original use of the Capitol as a church might initially be explained by the fact that there were no churches in the city at that time. Even a decade later in 1803, U. S. Senator John Quincy Adams confirmed: “There is no church of any denomination in this city.” 3 The absence of churches in Washington eventually changed, however. As one Washington citizen reported: “For several years after the seat of government was fixed at Washington, there were but two small [wooden] churches. . . . Now, in 1837 there are 22 churches of brick or stone.” 4 Yet, even after churches began proliferating across the city, religious services still continued at the Capitol until well after the Civil War and Reconstruction. 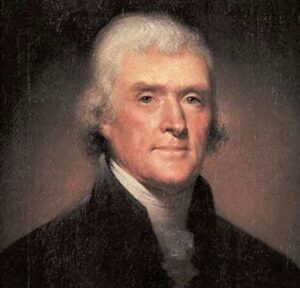 U.S. Rep. Manasseh Cutler, who also attended church at the Capitol, recorded in his own diary that “He [Jefferson] and his family have constantly attended public worship in the Hall.” 7Mary Bayard Smith, another attendee at the Capitol services, confirmed: “Mr. Jefferson, during his whole administration, was a most regular attendant.” 8She noted that Jefferson even had a designated seat at the Capitol church: “The seat he chose the first Sabbath, and the adjoining one (which his private secretary occupied), were ever afterwards by the courtesy of the congregation, left for him and his secretary.” 9 Jefferson was so committed to those services that he would not even allow inclement weather to dissuade him; as Rep. Cutler noted: “It was very rainy, but his [Jefferson’s] ardent zeal brought him through the rain and on horseback to the Hall.” 10 Other diary entries confirm Jefferson’s attendance in spite of bad weather. 11

In addition to Mary Bayard Smith and Congressman Manasseh Cutler, others kept diaries of the weekly Capitol church services including Congressman Abijah Bigelow and statesman John Quincy Adams. (Adams served in Washington first as a Senator, then a President, and then as a Representative; and his extensive diaries describe the numerous church services he attended at the Capitol across a span of decades.) Typical of Adams’ diary entries while a U. S. Senator under President Jefferson were these :

Attended public service at the Capitol where Mr. Rattoon, an Episcopalian clergyman from Baltimore, preached a sermon. 12

[R]eligious service is usually performed on Sundays at the Treasury office and at the Capitol. I went both forenoon and afternoon to the Treasury. 13

Jefferson was not the only President to attend church at the Capitol. To read the entire article, click here.