In Abortion Case, The Supreme Court Can Stop Biden From Pushing Extreme Rules In Secret Deals

The Biden administration has abandoned the legally mandated rulemaking process to establish its preferred policies through closed-door settlements with political allies.

Elections have consequences. Abandoning the rule of law should not be one of them. That matters not, though, to the Biden administration, which has abandoned the legally mandated rulemaking process to establish its preferred policies through closed-door settlement agreements with political allies.

To stop the administration from gutting the governing Title X regulations on abortion providers, however, Ohio and a contingency of 18 other states could also stop these shenanigans with a petition now pending before the U.S. Supreme Court.

Will Title X Fund Abortion? Depends on the President

When Congress passed Title X of the Public Health Service Act, it authorized the Department of Health and Human Services, or HHS, to make grants to support “voluntary family planning projects.” The statutory language of Title X, however, expressly prohibited grant funds from “being used in programs where abortion is a method of family planning.”

Since its enactment, the HHS regulations swung as if on a pendulum, bouncing from right to left in time with the policy persuasions of the president. Under Ronald Reagan, HHS banned the use of Title X funds for “family planning projects” that counseled or referred women for abortions. The Supreme Court upheld those regulations in 1991, in Rust v. Sullivan.

The Clinton administration’s HHS rescinded those regulations, however, and promulgated rules requiring grantees of Title X to “provide information and counseling regarding abortion.” Those new rules remained in effect until recently, with the HHS in 2019 issuing new regulations that removed the mandate that Title X recipients make abortion referrals and adopting a rule that permits the discussion of abortion so long as “the counselor neither refers for, nor encourages, abortion.”

The left-leaning American Medical Association (AMA) and a bevy of deep-blue states challenged the 2019 regulations. The Ninth Circuit Court of Appeals rejected the challenge. Conversely, the Fourth Circuit Court of Appeals struck the 2019 regulations in a lawsuit brought by the mayor and city council of Baltimore. The AMA sought review of the Ninth Circuit’s decision in the Supreme Court, as did the Trump administration of the contrary decision coming out of the Fourth Circuit.

On February 22, 2021, the U.S. Supreme Court granted certioria in both cases and consolidated the appeals. Two weeks later, Ohio, joined by the attorneys general of 18 other states, filed a motion in the Supreme Court seeking leave to intervene in the case as a party to defend the 2019 Title X regulations.

The states’ motion for leave to intervene proved prescient because, after reaching a backroom deal with the parties challenging the 2019 Title X regulations, the Biden administration last Friday filed a pair of joint stipulations to dismiss both appeals.

The Biden administration had previously succeeded with this tactic in the pending Supreme Court appeal over the “public charge” regulations at issue in Dept. of Homeland Security v. New York. That case is about regulations promulgated following the notice-and-comment period by the Department of Homeland Security that interpreted the statutory term “public charge” and provided that foreign citizens did not qualify for permanent residency status if they had used “food stamps, Medicaid, housing vouchers other public benefits.”

While lower courts had struck the Trump administration’s public charge regulations, the Supreme Court, finding the government likely to succeed on the merits of its appeal to the high court, entered an order allowing those regulations to remain in effect. Then on Feb. 22, 2021—the same day the Supreme Court granted certioria to hear the Title X cases—the justices agreed to hear the appeal of the public charge case.

On March 9, 2021, however, the Biden administration and the parties involved entered a joint stipulation to dismiss the appeal, and the Supreme Court dismissed the case the same day. And as Ed Whelan exposed at National Review Online, simultaneously the Biden administration dropped its defense of the “public charge” rules in all the pending appeals.

We Don’t Need No Stinkin’ Laws

The Administrative Procedure Act, or APA, mandates the procedure for rescinding and adopting federal rules that govern the minutia of American life. Notice and comment periods and the courts’ analyses of final regulations to ensure they are not arbitrary and capricious provide at least a minimal protection against rules established by unelected bureaucrats.

The Trump administration’s DHA complied with the APA to promulgate the final public charge rules. Rather than follow the legally mandated requirements for rescinding and replacing those regulations, the Biden administration instead colluded with litigants who opposed the regulations to allow them to be rescinded by the courts instead.

Last Friday, the Biden administration repeated this maneuver, filing a stipulated dismissal of the two Title X appeals. But unlike the public charge case, where the court immediately dismissed the case, the Title X case has yet to be dismissed—and that is likely thanks to Ohio and her sister states seeking to intervene as parties.

Private Groups Taking Up the Fight

The same day the Biden administration filed the stipulated motion to dismiss, a second motion to intervene also hit the Supreme Court docket. This group, represented by Alliance Defending Freedom, consists of the American Association of Pro-life Obstetricians and Gynecologists, the Christian Medical and Dental Associations, and the Catholic Medical Association. 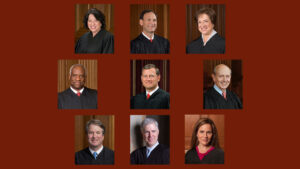 Whether the Supreme Court will grant the motions to intervene is unclear, but the briefs present strong arguments in favor of intervention. Ohio, for instance, received millions of extra dollars in funding under Title X as a result of the 2019 regulations. The second set of would-be intervenors likewise have a strong argument for standing based on their desire to participate in Title X without being forced to counsel women about abortion—something the prior regulations required.

How the Supreme Court resolves the competing motions in the Title X case will prove significant much beyond Title X.

How the Supreme Court resolves the competing motions in the Title X case will prove significant much beyond Title X, as the Biden administration appears poised to weaponize this strategy, with “regulation” of CO2 emissions likely the next target.

As the Wall Street Journal revealed yesterday, it won’t be through the normal APA regulatory process that climate activists seek to cap CO2 emissions. Rather, as emails between Democratic attorneys general and a former Obama official obtained by the Wall Street Journal reveal, the strategy is to tighten ozone standards so much that states must in effect reduce CO2 emissions.

From the lawsuit filed on Jan. 19, 2021, by the Democratic attorneys general from 16 states challenging the Environmental Protection Agency’s ozone regulations, it appears the strategy as executed in the public charge and Title X arenas will be used again. Namely, rather than await new regulations under the APA, the Biden administration will negotiate with friendly foes and then enter a stipulated settlement agreement that strikes the currently governing regulations.

Should the Supreme Court grant the motions to intervene in the Title X case, there will at least be some check on these backroom and backdoor deals. But we should not need states and private parties to police the executive branch. President Biden won the election, and his administration remains free to advance his preferred policy objectives—but he must do so consistent with the legal mandates of the APA.

Margot Cleveland is a senior contributor to The Federalist. Cleveland served nearly 25 years as a permanent law clerk to a federal appellate judge and is a former full-time faculty member and adjunct instructor at the college of business at the University of Notre Dame. The views expressed here are those of Cleveland in her private capacity.