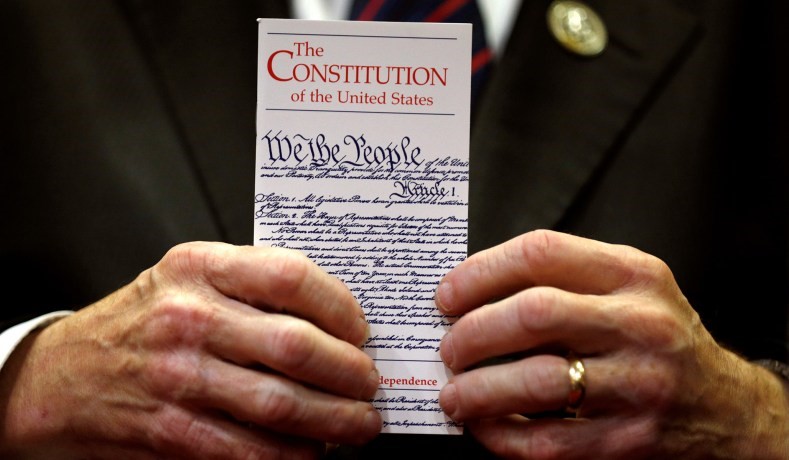 Fundamentals of our US Constitution

Intended Audience: We the People

The Constitution describes how our federal republican government is to work.

The Bill of Rights define citizens protections from the government.

“Whoever attentively considers the different departments of power must perceive, that, in a government in which they are separated from each other, the judiciary, from the nature of its functions, will always be the least dangerous to the political rights of the Constitution; because it will be least in a capacity to annoy or injure them. The Executive not only dispenses the honors, but holds the sword of the community. The legislature not only commands the purse, but prescribes the rules by which the duties and rights of every citizen are to be regulated. The judiciary, on the contrary, has no influence over either the sword or the purse; no direction either of the strength or of the wealth of the society; and can take no active resolution whatever. It may truly be said to have neither FORCE nor WILL, but merely judgment; and must ultimately depend upon the aid of the executive arm even for the efficacy of its judgments.”

The Congress commands the purse and prescribes the rules by which the duties and rights of every citizen are to be regulated. The will.

The Executive dispenses the honors but holds the sword of the community. The force.

The Judiciary is be said to have neither FORCE nor WILL, but merely judgment.

The Constitution of the United States

Article I – The Legislative Branch.

Articles of the Constitution

Article 1 gives Congress its powers and limits. Congress is the branch of the government who can make laws for the country. Article 1 also creates the two sections of Congress, the Senate and the House of Representatives.

Article 5 says that the only way the Constitution can be changed is by adding an amendment.

Amendments to the Constitution:

Of nearly 12,000 attempted by Congress since 1788, 33 were sent to the states for approval and these 27 were the only ones ratified.