A Tyranny of Moral Minorities

A Tyranny of Moral Minorities 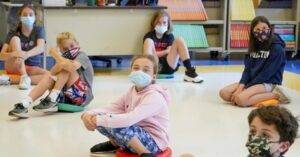 When pilots and flight attendants announced the end of the mask mandate in-flight, most passengers cheered. Everyone except the media which claimed the masked were the victims.

Biden, in an unexpected moment of sanity, said, “it’s up to them” whether people wear masks.

But since Biden has as much impact on the policy of his administration as the shoeshine guy at Union Station, the DOJ and the CDC have triggered a legal challenge to the federal court ruling.

Biden and the entire D.C. elite don’t like wearing masks. Most people don’t. Universal masking is mandated to accommodate a vocal minority, most of whom are not immunocompromised or otherwise especially vulnerable, but who still demand that everyone accommodate them.

This tyranny of minorities has long since come to define the Democrat coalition which knits together single-issue victimhood voters whose pet issue, whether it’s police shootings, green energy, racial justice, men pretending they’re women, or the right of teachers to sexually indoctrinate kindergartners against the wishes of their parents, must take precedence.

That is why the Biden administration will fight for an otherwise unpopular mask mandate.

Democrat political authority comes from the moral authority of defending oppressed minorities. The old Democrat party which asserted that it represented an oppressed majority being kept down by men of wealth has made way for a coalition of increasingly implausible minorities.

That’s the wide gap between the party of Jackson and of Obama. And it’s Obama’s party now.

Beyond the racial minorities of the civil rights movement, the moral minority consists of wealthy white elites, their sexual fetishes, cultural obsessions, and neurotic tics. Masking is just the latest neurotic tic that the decadent element that makes up its ruling base demands of all of us.

From police defunding to mandatory masking to men roleplaying as women, the outré demands are a minority even within the Democrat coalition. But the minority of minorities, by banding together, take something that only 2% of the country might want and turn it into something that the 31% of Americans who identify as Democrats are obligated to support on the party line.

And if the Democrats win, the will of the 2% is ruthlessly imposed on the 98%.

Each minority horse trades intersectional political acceptance for its cause in exchange for supporting everyone else’s causes. The black nationalists get slavery reparations and police defunding while the men who wear dresses get to be on the women’s swim team. Feminists get abortion until the last nanosecond of birth and environmentalists can have the EPA regulate backyard puddles. And wealthy hipster remote workers can make everyone wear masks.

Everyone gets what they want but the tradeoff is they all get even more things they don’t.

Fanatics and extremists are willing to make that tradeoff while terrorizing everyone else. The echo chamber of cancel culture is really a cooperative of crazies acting in concert to protect their own special privilege because they know perfectly well that in a healthy society and political culture their brand of insanity would never receive a hearing, let alone a mandate.

And they know that their best offense is by destroying norms to normalize their insanity.

The minority of minorities coalition forces Democrats to accept crazy premises and then to vocally defend them even when they don’t believe in them. Civil rights, once rooted in recognizable arguments about racial equality, has soured into esoteric culture wars. The simplicity of lunch counter sit-ins has given way, as it was always going to, to deconstructionist lists of grievances written by academic committees with their own specialized vocabularies.

Leftists still speak with the moral authority of victimhood even when they’re millionaires, but the moral language, once so clear and simple, pitting workers against bosses, black protesters against fire hoses, continues to be appropriated for every new incomprehensible cause.

Obama’s rise promised to revive the old moral assertions of civil rights for a new generation, instead he buried them under new layers of irony, postmodern exercises in egotistical empowerment, and deconstructionism, delighting the media while alienating Americans.

In the Biden era, the moral assertions weaponized for social media have become fumblingly ineffective. The Left declares that it must wield power in order to protect the power of corporations like Disney and the right of teachers to push sex ed to kindergartners. The remoteness of these causes from any classic paradigm of the oppressors and the oppressed reflects the distance that the Democrats have traveled from any notion of democracy.

The tyranny of minorities also ‘minoritizes’ morality into siloed causes that few can relate to.

Intersectionality labors to sell the various causes to those who have already bought into the coalition. The entertainment industry rushes to turn the incomprehensible trending mishmash of causes categorized as identity politics talking points into songs and shows to sway the public.

Morality requires universally agreed on values which moral minorities attack at every turn. The great effort to transform the existence of moral minorities into its own moral authority through intersectionality requires unsustainable amounts of messaging and outright intimidation. Cancel culture terrorizes people into not speaking or even thinking for fear they’ll run afoul of constantly changing codes that no one except their cultural oppressors can even keep track of.

Totalitarian states deploy mass propaganda like this either at the height of enthusiasm for their revolutions or at their insecure decline when everyone is starting to lose faith in the revolution. And it’s been a generation since even the faithful believe in the cause rather than the anti-cause characterized by a rotating cast of conservative hate objects in the media and social media.

The best evidence that the minority of minorities cause has become incomprehensible even to its adherents is the extent to which it relies on anti-cause outrages rather than a utopian vision.

What does the Biden administration stand for? What are MSNBC, Jon Stewart, and their cast of celebrity activists fighting for? Tellingly, the very title of Stewart’s failed new Apple TV show, The Problem with Jon Stewart, signaled this inability to articulate a positive vision of his politics.

A country faced with real problems has less patience for the moral narcissism of elites.

The tyranny of moral minorities uses an assembly line of victimhood to assert their right to absolute power, but both the causes and the problems have become alien to the crises, inflation, crime, and despair, that threaten to dominate the American body and soul.

The Old Left could have met economic crises with class warfare, but the Postmodern Left has lost any tenuous hold it ever had on economic issues. Even its familiar prescriptions of social welfare are centered around the preoccupations of its coalition with green energy nuttery, racial equity supremacy, and gender and transgender politics so that mere economics takes a backseat to what has become the far more exciting Marxism that puts identity over money.

How can you do class warfare when you’ve become a movement of billionaires whose supreme causes are electric cars that cost more than the average annual income, the sexual fetishes of wealthy men, and the fussiness of remote workers who don’t like being around other people?

It’s getting increasingly hard to disguise the fact that leftist revolutions aren’t about liberating the majority, but about enslaving it to the cultural obsessions of a tiny minority.

You can only dress up the tyranny of an upper class in oppressed drag for so long.

The moral minorities aren’t out to liberate anyone, including themselves, but to force everyone to use the words they want, to eat and dress like them, and to live like them.

There’s a leftist term for that, it isn’t revolution or liberation: it’s colonialism.

When 2% of the country gets to tell everyone else how to live, that’s true oppression.

Now their masks, literal and metaphorical, are coming off and they fear that more than anything else because power can simply be defined as a question of who has to accommodate whom?

In the sky or on the ground, in the classroom or the office, the answer is all too clear.