Why Bernie Sanders is Wrong About Sweden 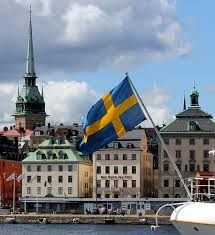 The ‘Nordic model’of socialism, which he and other leftists tout, is more like ‘ruthless capitalism,’ says Johan Norberg.

What is socialism? Some of its advocates have trouble defining the ideology. “Being a socialist means different things to different people,” a leftist podcast host told actress Cynthia Nixon last year. “For some, it is a Nordic-style welfare state. For others, it is the liquidation of the capitalist class and the democratization of the means of production.” The host asked a flustered Ms. Nixon, then a candidate for New York governor, where she came down. “Being a socialist, um, I, I, I would say is—I am more in, I am more in line with the Nordic model myself,” she replied.

When the alternatives are Cuba, China and Venezuela, everyone becomes “more in line”with Sweden, the classic Nordic example. Trouble is, most Swedes aren’t in line with American socialists like Ms. Nixon, Sen. Bernie Sanders and Rep. Alexandria Ocasio-Cortez. “All of their models that they could point to, given a couple of years, they end up in famine and killing,”

Swedish author and historian Johan Norberg tells me. “So they always come back to Scandinavia in the end.” True, Sweden has a significant welfare state, but Mr. Norberg says it’s underpinned by “ruthless capitalism.” Mr. Norberg was born in 1973, during his country’s brief but costly socialist experiment. He remembers discussions about books and history at the family dinner table in Hässelby, a Stockholm suburb. He assumes that his mother, a teacher, and father, a military historian, had “broad establishment, center-rightish” politics. Yet they were open to persuasion.

“I think that taught me that people’s minds can be changed if you work hard enough.” As a teenager Mr. Norberg considered himself an anarchist, though it was mostly a matter of aesthetics. “It’s neither left nor right. It was more like being uncomfortable in modern society,” he recalls. “I just didn’t like large-scale businesses, factories, highway transportation, things like that.” He idealized the simple life of his ancestors in the 19th century. “I had this romanticized idea about them, and I looked at pictures of them: Look at that rural lifestyle, happy farmers.”

Eventually he realized 19th-century life wasn’t all he cracked it up to be. “I thought it would come with penicillin, and sort of modern surgery, and instant access to all of the calories I needed to survive another day, and so. And I think history really saved me there, because then when I read up on my ancestors in northern Sweden, I realized that they didn’t live ‘ecologically.’ They died ecologically, at a very young age.”

Mr. Norberg studied the history of ideas at Stockholm University. After graduating he joined Timbro, a Stockholm-based free-market think tank, where he researched and wrote books about Swedish history and economics. An important lesson from his academic training: “Many of the great disasters that have befallen on us have come because people have changed their interpretation of the world economy.”

Ideas can produce prosperity too. The impoverished life Mr. Norberg once idealized wasn’t the norm for much longer. By the mid-19th century Sweden had legalized emigration, he says, “which resulted in most people just wanting to leave Sweden immediately for the U.S.”

Back then, Swedish politicians and intellectuals looked to America as a model. Between roughly 1840 and 1870, classical liberals took power. “They basically did everything: save property rights, open business, free trade, beginning to open up for religious freedom, freedom of the press.”

Sweden was one of the world’s fastest-growing economies for nearly a century. But by the 1960s, the country began to take its wealth-creating prowess for granted. I tell Mr. Norberg about New York Mayor Bill de Blasio’s assertion: “There’s plenty of money in this world, it’s just in the wrong hands.” In 1960s Sweden, Mr. Norberg replies, “that’s almost verbatim what they said back then: ‘Now we’re this rich. Shouldn’t we just distribute it, and give it to the people and the places we like?’ ”

Such thinking overtook the country’s dominant center-left Social Democratic Party. “We thought we could do anything, and we had all of those other preconditions: the work ethic, some sort of social pressure, which meant that people were doing the right things, and they wouldn’t want to live on the dole,” Mr. Norberg says. “And then for 20 years, from 1960 to 1980, we doubled the size of the government spending as a percentage of GDP. That’s the aberration in Swedish history.”

The Swedish welfare state first was a safety net for the needy. Over time the political class moved to “socialize the lives of the middle classes as well.”

The plan: “Increase their taxes, and their benefits, and then they will buy into this system.”

The consequences were predictable. “It resulted in less work, people preferring to stay at home and paint the house rather than hiring someone to do it, general lack of getting the kind of education that matters. It led to entrepreneurs leaving Sweden.”

Private-sector employment declined from the 1970s to the ’90s, while disposable-income and economic growth was relatively slow. Some of the country’s best companies and brightest minds fled an onerous inheritance tax. Plenty of economists knew Sweden needed reform but undoing the damage would take years.

A critical figure was Prime Minister Carl Bildt of the center-right Moderate Party. He came to power in 1991, as the rigid Swedish economy struggled to cope with an economic crisis. Mr. Norberg calls the former prime minister “an ideas politician” who understood free-market principles. Mr. Bildt’s coalition government cut capital-gains and corporate taxes, while the top marginal income-tax rate shrank to 50% from around 90%. Sweden deregulated the telecom and energy industries while introducing school vouchers and other market-oriented reforms.

The Social Democrats retook the government in 1994, but the trend toward economic liberty continued for another quarter-century. “One thing the left gets wrong is that they think that Sweden has this sort of warm, friendly, fuzzy capitalist thing—no layoffs, no fierce competition, protecting the old companies and so on. And it’s really the total opposite,”

Mr. Norberg says. “It’s more deregulated. The product markets are much fiercer competition, much more free trade. All of the companies know that they have to be world champions or they will be destroyed.” American leftists, even those who shy away from the “socialist” label, generally call for higher taxes on “the rich” to support an expanded welfare and entitlement state. That, too, misapprehends the Swedish example. “We have much higher taxes on the poor and the middle classes than you do,” Mr. Norberg says. “And this is the dirty little secret that no one in the American left wants to talk about.”

Nonprogressive taxes on consumption, social security and payroll are 27% of Swedish gross domestic product, 16 points higher than in the U.S. Assumptions about Swedish health care often are wrong too: “Lots of Americans think it’s a Medicare for All thing. But it’s not even a national system. It’s a regional system.”

Largely funded by a flat tax, the system isn’t all government-run: “We had a problem with productivity and investment in the health-care sector. So now we have more freedom of choice and more competition in the provision of health care.”

Whereas American Democrats aspire to abolish private insurance, “one of the biggest hospitals in Stockholm was privatized, and you can go to private providers. And the first line of health-care defense, in a way, is often private clinics.”

Mr. Norberg acknowledges there’s some truth to the socialist stereotype. Heavy labor-market regulations and powerful unions survived the socialist era and strain the economy. The country has no official minimum wage, but its de facto rate is high. “For a while, that looked good in Sweden, because it meant that all of the less productive companies were destroyed.” While this worked with “a homogenous workforce with very high education and experiences in the Swedish language,” large-scale, low-skill migration has upended the model. With a massive influx of Middle Eastern refugees in recent years, “Sweden is becoming a normal European country, in a way, with a big anti-immigrant party.”

To keep the far-right Sweden Democrats out of power, the Social Democrats currently lead a broad coalition government. Mr. Norberg says that reducing taxes on the rich, deregulating the labor market and liberalizing housing are at the top of the agenda. If Sweden fails as a socialist model, what about its Scandinavian neighbors? “Denmark is far from a socialist planned economy,” then-Prime Minister Lars Løkke Rasmussen said in response to unwelcome praise from Mr. Sanders in 2015. Denmark is a market economy.”

Not long after lunch with Mr. Norberg, I asked Finnish President Sauli Niinistö if he leads a socialist country. His answer: “No, God bless.”

Norway is similar, and a major producer of fossil fuels to boot. Mr. Norberg does think his country has lessons for America—but they’re free-market ones. Whereas U.S. entitlement spending is on a path of uncontrollable growth, “our politicians basically said, from the left to the right, this is not sustainable. Our social-security system will collapse if we don’t reform it,” he says. Americans who talk up the Swedish model “would have to reform social security and change it from defined benefits to defined contributions. And reduce social-security pension payments when the economy is doing worse.”

He understands Americans’ disdain for politicians. “Obama was going to stop the oceans from rising, and then Trump is going to get the old jobs back, and ‘I alone can fix everything. The world’s a mess, but I can do it.’ That kind of sets you up for some disappointment in the end.”

Yet he sees much to admire across the Atlantic: “No matter how far to the left you are, if things go wrong in Sweden, yeah, if you can find a second career in the U.S. and move there in some way, that’s where you want to go.” A couple of days after our interview, Mr. Norberg emailed a warning for Americans: The most dangerous place to be is top of the world, think you have it all made and can afford to experiment with socialism or protectionism, because you have plenty of room for mistakes before you hurt yourself, ”he wrote. “That’s where Sweden was in 1970. It almost destroyed us, and it took some heroic efforts to get back on track.”

Mr. O’Neal is a London-based editorial page writer for the Journal.