To many people history is a pain they’ll never soothe. Since knowledge of events from long ago might contradict their feelings and passions, it is best left alone, shunned, and ignored. Besides, we’re the ones we’ve been waiting for, right? Why bother with the dead hand of the past? History can hurt us emotionally, so set it aside like handsome shoes that pinch, shoes that are too good and fashionable to throw away, but end up collecting dust on the closet floor. 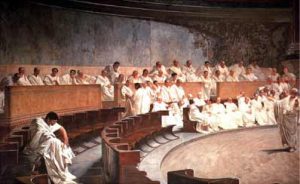 The Thing about history is that it subtly questions what we do today. It educates Socratically; it doesn’t indoctrinate. The Classicist Victor Davis Hanson makes, I assume, a good living from a lifetime of reflection on what Greeks, Romans, Venetians, and various generals etc. did in times of crisis. Like Hanson, another great thinker, G.K. Chesterton, in 1929, dealt with history’s lessons in his engaging and conversational style.1

Along with history, The Thing about laws and institutions is that most people aren’t especially interested in why they came about. Chesterton described the paradox of a fence or gate across a road. Someone built it, and for a reason. A Progressive would say, “I don’t see the purpose of this thing; let’s clear it away.” The more intelligent reformer or conservative stands athwart the fence and responds, “If you don’t see the use of it, I certainly won’t let you clear it away. Go away and think. Then, when you can come back and tell me that you do see the use of it, I may allow you to destroy it.” In Chesterton’s worldview, conservatives don’t reflexively roll with the radicals. They defend The Thing, the proven ways, until reformers convince them to join in changes.

This principle applies to a thousand things, to trifles as well as true institutions. Local, state, and national governments often amend laws. All is well and good when legislators consider why the law is what it is before they amend or repeal it. There are reasons for our societal and governing institutions. It is one thing for societal norms to naturally change incrementally through the passage of time and quite another for five lawyers on scotus to upend society, to clear the gate across the road, without so much as a fare-thee-well.

When modern Vandals tear through Washington DC in the fashion of the old Vandals ripping up Rome, we have a problem. The BLM and Antifa pukes aren’t reformers; they are barbarians deserving no quarter. They typically get away with their barbarism when big city mayors can’t see further than their next reelection. Something is very whacked and wicked when the people charged with defending lives and property figure it is in their electoral interest to stand down their police and watch their cities burn. Do they not realize the first reason, The Thing when societies form governments is to secure life and property? History and societal standards are so shallow in so many that they rationalize hundreds of deaths and widespread destruction.

So disconnected are those from The Thing of the statues they deface, that anti-history ignoramuses tear down the memory of famous abolitionists in the name of combatting so-called and non-existent systemic racism. While it is one Thing for spoiled local anarchist losers to get their kicks with cans of spray paint, it is another Thing entirely when political leaders see nothing more than the present, and how they can turn and twist opportunities into political power. Nobody has any business destroying anything until he damn sure knows why it exists in the first place and the future effect of its demise should that institution be abolished or repealed. 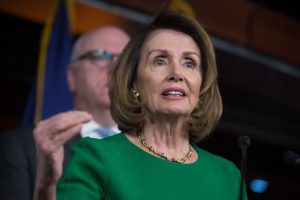 Nancy’s House recently passed a bill to incorporate Washington DC as a state. Was there any serious debate as to why the seat of American government isn’t within a state? Of course not. Goodness, that would involve the study of our Revolutionary War era, the Constitution and state ratification conventions. Who has time for The Thing of history when doing what is best for the country isn’t the objective anyway?

Perhaps just as concerning are the relatively few defenders of the old and proven ways and institutions. Is it all that difficult to point out the danger of rashly undoing things before the un-doers have a clue as to what they are doing? In the years leading to the 17th Amendment, Senator Elihu Root of New York lamented the rush to democratize senatorial elections with little consideration as to why the Framers charged state legislatures with senatorial appointment in the first place. The Thing about democratizing the senate, and with it the entire congress, its instability leading to disorders and perhaps eventual dissolution of the Union, never quite made it to the editorial pages of leading newspapers.

America has used up, if not overdrawn, its liberty bank account. Where our early governments knew the difference between liberty and license, and passed laws that left society unhindered in promoting unspoiled liberty rather than degrading and rotting license, government today does just the opposite. What it often defends as rights, which are in truth no such things, were unacceptable and spurned by society just a short time ago.

We are no longer self-governing and we did it to ourselves. We the People ratified the Seventeenth Amendment with little consideration of The Thing, the history of the Framers’ Senate. We’ve endured the effects of the 17th for over a hundred years. It past time to amend our Constitution, and do it this time full in the knowledge of what we are doing.