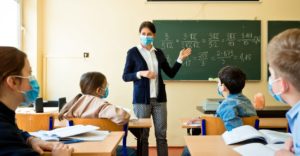 WSJ Torches the Overblown COVID Hysteria About the Dangers of Reopening Schools Matt Vespa – Jul 15, 2020 Does this mean we just go back to school without adhering to some level of safety? No. Of course, precautions must be taken, but we can’t act like just because coronavirus is around, that our schools are…

Does this mean we just go back to school without adhering to some level of safety? No. Of course, precautions must be taken, but we can’t act like just because coronavirus is around, that our schools are now potential targets for the spread of this thing. First, they’re not. Second, I’m tired of people not thinking that airports, bars, restaurants, and other places where, you know, people gather were never areas where one could get sick until this pandemic broke out. You could always have contracted anything from these places. Ask yourself, before COVID, did you think places where you ate cleaned those menus—and how many folks do you see not wash their hands after using the bathroom. You’d be on crack to think if they did prior to all of this hysteria. And yes, it is hysteria, fueled by the liberal media peddling panic porn at all costs. It’s to the point where you can’t trust the numbers, as you saw with the COVID positivity cases in Florida. Some testing sites don’t report the negative results and when they do, you see 98 percent positivity rates, like the one at Orlando Health, drop to…9.4 percent. Yeah, you don’t think that screws with the numbers. There’s a lot of funky business going on—so be vigilant and just circle back to the numbers after a few days. And please, you already know this because you’re all good patriots, DO NOT BELIEVE anything MSNBC or CNN doles out on this anymore.

If you want to watch a boomerang hit MSNBC in the face, then look no further to the handful of pediatricians who said it was time to reopen schools. It’s a safe bet some producer thought these doctors would agree with the liberal media’s line of avoiding schools at all costs in the Fall. Nope (via NBC News) [emphasis mine]:

Evidence suggests that children are not as susceptible as adults to COVID-19, the disease caused by the coronavirus. Even among those who have been infected, it’s relatively rare for children to develop serious complications or require hospitalization.

But this doesn’t mean classrooms can be exempt from social distancing and other safety precautions, particularly if schools intend to welcome kids back on site in less than two months.

Having kids physically present in schools in the fall as much as possible would be an “ideal situation,” Lighter said, but schools will need to implement policies that allow students to maintain some distance indoors and avoid close contact for prolonged periods of time. This could include decreasing class sizes, rearranging desks to ensure kids aren’t clustered together or facing one another and moving gym classes or other recreational activities outdoors, she said.

In the U.S., children make up about 22 percent of the population, but kids account for only 2 percent of coronavirus cases so far, according to the Centers for Disease Control and Prevention.

The University of Vermont also torpedoed the narrative that children are potential targets for infection and for spread this virus. It seems like kids don’t get it and they don’t spread it. The adults they’re around with, however, is another issue. The Wall Street Journal editorial board is equally vocal regarding President Trump’s call to reopen schools: the data, scientific, economic, and health-related, all point to getting our kids back in the classroom in the Fall (via WSJ) [emphasis mine]:

Start with the relative immunity of young children to the disease, which should reassure parents.

According to the Centers for Disease Control and Prevention, 30 children under age 15 have died from Covid-19. In a typical year 190 children die of the flu, 436 from suicide, 625 from homicide, and 4,114 from unintentional deaths such as drowning.

Children so far have been shielded from the virus compared to working adults. But even pediatric cancer patients at New York’s Memorial Sloan Kettering were about a third less likely to test positive than their adult care-givers, and only one of 20 who tested positive required noncritical hospital care. In Sweden, which kept schools open, only 20 children under age 19—0.6% of confirmed cases—have been admitted to the ICU and only one has died.

Parents and teachers understandably worry that children might spread the virus. But a recent retrospective study of schools in Northern France, from February before lockdowns, found that “despite three introductions of the virus into three primary schools, there appears to have been no further transmission of the virus to other pupils or teaching and non-teaching staff of the schools.”

Teens appear to be more infectious. Yet schools that have reopened in most countries, including Germany, Singapore, Norway, Denmark and Finland, haven’t experienced outbreaks. Some schools in Israel had outbreaks last month after class sizes were increased, but most infections in both teachers and students were mild.

In any case, these risks can be managed as the Trump Administration has suggested in its guidance to schools: Space desks six feet apart, stagger class periods, make kids wear face coverings when possible, keep them in the same cohort, and have them eat, play and learn outdoors as much as possible. Teachers can also wear face shields, and schools can use plastic barriers in higher-grade level classrooms to separate them from kids.

Philadelphia Superintendent William Hite warned that kids were falling through the cracks, which could portend an increase in youth delinquency and crime. Research outfit NWEA has projected that “students are likely to return in fall 2020 with approximately 63-68% of the learning gains in reading relative to a typical school year and with 37-50% of the learning gains in math.” Another half-year or year of lost instruction will be impossible to make up.

Achievement gaps will surely increase. Affluent families may supplement and monitor their children’s virtual instruction while working from home. But how can a first-grader whose parents don’t have that luxury be expected to learn virtually on his own?

It’s obvious that keeping our kids out of school does more harm than good. In fact, an entire class of children behind and unprepared regarding their education could lead to a more detrimental socioeconomic situation in the years to come than this little virus could ever inflict.