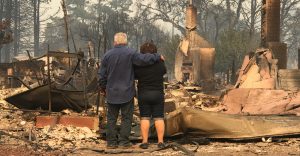 WSJ September 12, 2020 When houses are burning down, electric cars and solar panels don’t seem much of an answer. By Holman W. Jenkins, Jr. | 774 words Wow. Overnight, apparently there’s nobody who does not understand that climate policy is not an answer to California’s wildfire crisis. Even the do-gooder, nonprofit news group ProPublica…

When houses are burning down, electric cars and solar panels don’t seem much of an answer.

Wow. Overnight, apparently there’s nobody who does not understand that climate policy is not an answer to California’s wildfire crisis.

Even the do-gooder, nonprofit news group ProPublica plaintively asks in a headline, “They Know How to Prevent Megafires. Why Won’t Anybody Listen?” The article goes on to assert: “The pattern is a form of insanity: We keep doing overzealous fire suppression across California landscapes where the fire poses little risk to people and structures. As a result, wildland fuels keep building up.”

I guess when thousands of people might be burned out of their homes, it concentrates the mind.

But then why was California Gov. Gavin Newsom’s most quoted response to the fires “Never have I felt more of a sense of obligation . . . to face climate change head on”?

Confusion abounds. One admirable New York Times article makes clear the immediate answer does not lie in climate policy: “Millions of Americans are moving into wildfire-prone areas outside of cities, and communities often resist restrictions on development. A century of federal policy to aggressively extinguish all wildfires rather than letting some burn at low levels, an approach now seen as misguided, has left forests with plenty of fuel for especially destructive blazes.”

But another Times article on the same day insists that “the mechanism driving the wildfire crisis is straightforward: Human behavior, chiefly the burning of fossil fuels like coal and oil.”

Such sentences are a counsel purely of despair. People who take an interest in global warming can only conclude fires are unstoppable and must be endured as a result of our accumulated planet sins.

I promise no long foray into social psychology, but take the most textbook finding of behavioral economics: “prospect theory,” or the observed tendency of human beings irrationally to overvalue a bird in the hand vs. multiple birds in the bush.

This discovery really tells us that people, in their mind’s eye, overweight a potential loss against a potential gain because the loss might be visible to others. Human beings are intensely social creatures even in the ways they systematically misconstrue their own interests. This is also why it’s such an enormous, heavy lift to get past virtue-signaling before we can speak rationally about key matters. We have to spend 20 minutes talking about climate change before we can spend one minute talking about policies that would actually affect wildfires.

But, as I say, their houses burning down are an incentive for people to grow up.

A bit of history: It’s been nearly 32 years since climate change became a mainstream political cause—I date the beginning to then-NASA scientist James Hansen’s public fight with the first Bush White House in 1989. In the decades that followed, as nature dictates, climate politics became institutionalized. Institutionalized means interest groups and business lobbies becoming self-sustaining based on the money that climate fears generate. A cynic might note that during this time the world’s greenhouse emissions rose more steeply than ever. Problems that become institutionalized aren’t solved. They become a multigenerational meal ticket by not being solved.

And yet 32 years have taught us a few things. It was always implausible that the world’s politicians and electorates would require their economies to forgo the advantages of fossil fuels and so it has proved. But we also have discovered a lot about the likely track of future emissions. The world seems to be adhering to RCP 4.5 (Representative Concentration Pathway), the second-lowest of the CO2 scenarios sketched by scientists. And not because of penny-ante handouts to solar panels and electric cars, but because of very large social and economic megatrends: urbanization, slower population growth, a shift to service- and digitally-based economies, advancing technology and a declining energy intensity of GDP. One example: Fracking led to a multiyear decline in U.S. greenhouse gas output. Last year, before the pandemic hit, global emissions would have been flat if not for China’s.

Though this column has frequently mentioned the virtues of a carbon tax, nothing is more important for climate change than making sure this socioeconomic progress continues.

Progress in politics is harder to come by, but I can point to some. In the past 24 months, it likely has become impossible for government and private agencies to continue peddling dire climate forecasts, as they have in recent years, based on an unrealistic, worst-case RCP 8.5 emissions scenario.

A surprising thing has happened: Even greens have become embarrassed at the institutionalized dishonesty of such forecasts. (I cited a significant example in a column here in January.)