[The following is a trilogy of states debt reports from three separate sources. For American taxpayers, this concern is in addition to the threat to their bank accounts of the continuing annual deficits that contribute to the $22 trillion in national debt plus Social Security & Medicare commitments of $56 trillion. Editor]

By The Editorial Board | 736 words

Incomes overall in America are growing smartly, but some states and regions are doing better than others. The Bureau of Economic Analysis (BEA) this week published state personal income data for the second quarter and revisions for the past three years—and the comparisons carry economic and policy lessons.

Economists have been surprised by the strength of consumer spending, and one reason may be that income growth has been faster than they thought. The BEA revised personal income growth upward in most states, especially in the West and Midwest. Incomes were revised up 4.2% in Colorado and Washington, 3.9% in Utah and 3.1% in Idaho.

One not so surprising exception is Illinois where growth was revised down 1.2%. Its neighbors Indiana (1.5%), Michigan (2.5%) and Wisconsin (2.6%) experienced modest upward revisions. Illinois incomes have grown faster over the last year (3.7%) than during the late Obama years amid an uptick in manufacturing, but the state still lags in the Great Lakes region.

Manufacturing earnings in Illinois have increased 4% over the last four quarters, but workers and businesses have been fleeing. Last year 80% of Illinois cities lost population, according to the Illinois Policy Institute. Swelling worker pension obligations are driving up property taxes, and some towns are imposing special fees to pay for public-safety pensions. Springfeld is still a wholly owned subsidiary of the government-worker unions.

Farm states have lagged the rest of the country in income growth, and one culprit is tariffs by China, Europe, Mexico and Canada in retaliation for President Trump’s steel and aluminum tariffs. Dairy states were squeezed the most. Farm earnings last year declined 18% in Florida, 32% in Wisconsin and 35% in Pennsylvania, though overall incomes in these states still grew faster than in New York and Illinois.

Oil and natural gas drilling has invigorated several state economies. Drillers especially in shale-rich formations like the Bakken and Permian have taken advantage of OPEC production cuts by lifting their output as oil prices have remained flat. U.S. crude output climbed to 12 million barrels per day in June from 10.6 million a year before.

Total wages and salaries for mining workers (which includes oil and gas) have increased 12% in North Dakota and Pennsylvania, 18% in Texas and 20% in Alaska over the past four quarters. Producers have been raising pay to compete for workers in a tight labor market. The average oil and gas worker earns $109,000, according to the Bureau of Labor Statistics. Those are the incomes Elizabeth Warren is targeting with her proposed ban on hydraulic fracturing.

Texas has especially benefited from the shale resurgence, but its economy has become more diversified since the oil boom-and-bust of the 1980s. During the second quarter, Lone Star State incomes grew 7.5%—the most in the country—and professional services (1.12%) and finance and insurance (0.91%) contributed more than mining (0.88%).

Low taxes and a lower cost of living along with a generally business-friendly climate have helped Texas attract companies and workers from other states. Apple is building a $1 billion campus and its new Mac Pro factory in Austin. McKesson is moving its headquarters from San Francisco to Dallas.

During the early Obama years California ranked among the fastest growing states as its housing market recovered and tech startups expanded in the Bay Area. But entrepreneurs are increasingly choosing low-tax climes with less expensive housing. Over the last year, information industry earnings rose a mere 2% in California compared to 19% in Washington, 12% in Oregon and 10% in Arizona.

Democrats portray California as a paragon of progressive governance but its job growth has flagged of late. The Bureau of Labor Statistics reported this week that employment over the last 12 months increased 1.8% in California, 2.4% in Texas, 2.5% in Arizona, 2.6% in Washington, 2.8% in Utah, and 3% in Nevada. The trend bears watching to see if California pays a price for its binge of new labor and environmental regulation.

Finally a word on Connecticut, a frequent target of these columns where new Democratic Gov. Ned Lamont is attempting an economic turnaround. The Governor so far has kept his promise to businesses and high earners not to raise their taxes, and it’s encouraging that wages and salaries during the first two quarters of 2019 increased 4%, the same as in Massachusetts. The bad news is the state has dug a deep hole, but maybe it has stopped digging.

Most of the “sinkhole” states with the most red ink are blue. But should we be surprised?

Now that states are required to follow new rules of full financial disclosure, the truth is coming out: Most of the states in the union don’t have enough money to pay all of their bills. In its latest report, Sheila Weinberg, head of Truth in Accounting (TIA), which prepares and publishes its Financial State of the States report every September, said:

At the end of the fiscal year (FY) 2018, 40 states did not have enough money to pay all of their bills. This means that to balance the budget — as is supposedly required by law in 49 states — elected officials have not included the true costs of the government in their budget calculations and have pushed [unreported] costs onto future taxpayers.

While most states report that they are making efforts to fully fund their pension plans, in the past they weren’t required to account for liabilities for pensioners’ healthcare costs. Now they are.

For example, the state of New York touts its fiscal responsibility by reporting that it has funded 93 percent of its pension liabilities. But, under the new full disclosure rules, the state has been forced to reveal that it has only funded one penny out of every dollar of its enormous retiree healthcare obligations.

Added together, those 40 states — the worst of which TIA refers to as “sinkhole” states — owe more than $1.5 trillion in total debt. When each state’s unfunded liabilities is divided by the number of each state’s taxpayers, the truth is staggering. For example, each taxpayer in New Jersey (50th on the list) owes $65,100 in order for the state to meet its promised obligations. Illinois is right behind, with each taxpayer liability calculated to be $52,600.

There is some “sunshine,” but precious little. Only three states received A’s for their fiscal condition. Another seven received B’s, 13 received C’s, 18 received D’s, while the rest earned failing grades of F for their fiscal irresponsibility.

Four of the five “sunshine” states — Alaska, North Dakota, Wyoming, and Idaho — are enjoying surpluses thanks largely to their booming energy industries. But all five are behaving responsibly with their surpluses. TIA lauded Utah for its careful and prudent financial management:

Utah’s taxpayers and residents benefit from some of the most responsible financial management practices in the nation. Utah has the best record among the 50 states in keeping expenses below revenues.

Utah also produces some of the timeliest financial reports in the nation.

On the other hand leaders in Connecticut (48th) are frittering away their state’s healthy financial condition by deliberately underfunding that state’s promises:

Connecticut’s overall financial condition improved slightly from the previous fiscal year. The amount of Connecticut’s debt related to unfunded retiree health care benefits slightly decreased, but the state still needs $51,800 from each state taxpayer to pay off the debt accumulated to date.

While some focus on Connecticut’s strong economic indicators, such as personal income, the state is not setting enough money aside to pay for promised benefits, including unfunded pension and retiree health care promises.

Adding to the woes of “sinkhole” states is the exodus of high-income individuals. Lee Wallace, a resident of Illinois, is one of those who hasn’t left yet, but plans to shortly:

I live in Illinois. Lifelong Illinoisan. Yes, I know it sucks. My 5 year plan is to leave the state before it collapses financially and my home value plummets. Property taxes, sales taxes and income taxes are insane over here. DO NOT MOVE HERE….

I live outside of Chicago in the suburbs. Yes there are lots of jobs and opportunity here so that’s good — but beware: Illinois is a house of cards that is near its tipping point, financially speaking. The unfunded pension debt is unsustainable and among the worst in the country.

They can’t fix the pension problem because this is a completely blue state and run by Democrats and also very strong labor unions and lobbyists over here.

The 5 States With the Most Underfunded Public Employee Pensions

Worse, those costs can be expected to rise because politicians have failed to reach a compromise.

Many state government-run pension plans are running short of the money needed to pay 100% of the retirement benefits that state politicians have promised to the teachers, police officers, firefighters, and other employees of state governments.

How short depends on the state and how you measure the amount of the shortfall. In October 2018, Bloomberg’s Danielle Moran tallied the total liabilities and the funded portion that applies to each state’s public employee pension funds, finding that five states had funded less than 50% of the cost needed to pay for their promised state public employee’s pension benefits:

Another way to measure the shortfall is to calculate the amount of money that each individual state resident would have to cough up to fully fund the cost of providing state government employees with the retirement benefits promised to them by state politicians. The chart below shows those figures as calculated from the 2018 pension funding data provided by Bloomberg and state population data from the U.S. Census Bureau. 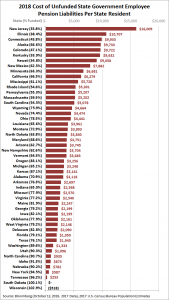 The dollar amounts shown are how much every man, woman, and child in each state would have to pay today to put each state public employee pension fund on track to pay out promised benefits to state government workers in full after they retire.

Worse, those costs can be expected to rise because politicians have failed to reach a compromise.

The residents of two states have good news. Both Wisconsin and South Dakota have fully funded their state employee pensions, where Wisconsin has actually overfunded it by $518 per state resident.

Unfortunately, 48 other states would require each of their residents to pay more out of their pocket to cover their unfunded public employee pension liabilities. Going by this measure, the five states worst off include:

Kentucky’s 4.4 million residents, which ranked the worst by its percentage of pension liability that has been funded, would have to each come up with $9,632 to fully fund their state government employees’ pensions.

Worse, those costs can be expected to rise since politicians in the state’s legislature failed to reach a compromise to resolve the state’s pension crisis in a special session at the end of 2018, where at least one of the state’s largest public employee pension funds is projected to run out of money and collapse within five years.

Craig Eyermann is a Research Fellow at the Independent Institute.