How the Utah Legislature can address inter-generational fiscal inequity

Legislature should support push for a federal constitutional amendment to control federal spending.

It is fair to say that many people in Utah and around the country are experiencing a crisis of confidence when it comes to their trust in the federal government. Regardless of political persuasion, recent history has offered no shortage of issues to strain the faith of citizens in their federal government and national leaders. But the biggest abuse has been Washington’s imprudent spending, fiscal and monetary policies that have resulted in trillion-dollar annual deficits, about $30 trillion in federal debt, and excess inflation.

This legacy of debt which may have been conceived in the hope of correcting current inequities has instead become a powerful force for creating generational inequities. Excessive spending increases inflation in the short-term, and unsustainable debt reduces future economic growth and shifts the economic burden of our current overspending to future generations.

The accumulation of debt, especially the unfunded obligations associated with federal social insurance programs, exposes the country to the risk of a fiscal crisis, and threatens the long-term viability of Social Security and Medicare. As the “trust funds” associated with Social Security and Medicare are exhausted, future generations will pay higher taxes and receive less benefits.

Such intergenerational transfers of wealth are already inspiring an inter-generational conflict which will only increase as social insurance programs absorb more of the federal budget. Future generations will ask the obvious question: why did our parents and grandparents not pay the taxes required to finance their own pension and health care benefits? Addressing this inequity will require broad bipartisan support for federal fiscal restraints, along with agreement on the need for discretionary spending cuts, social insurance program reforms, and tax reforms that will generate more revenue.

The non-partisan Congressional Budget Office forecasts that as the public debt/GDP ratio grows, there will be slower economic growth and fewer job opportunities for future generations, greater economic instability, and less fiscal space to respond to major economic shocks. Slower job growth will hit the least skilled and lower wage workers the hardest, widening disparities in income and wealth distribution across income classes. This is not the legacy we should leave to future generations. 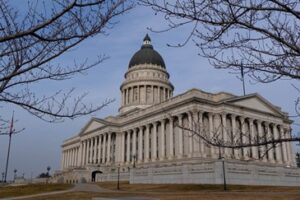 Utah and many other state legislatures understand they have the power under Article V of the U.S. Constitution to address federal fiscal irresponsibility. Two thirds of the states can call a convention of states to propose fiscal restraints on the federal government and address these inter-generational inequities. Any resulting amendment proposed by a convention must be submitted for ratification by three-quarters of the states, preferably by a vote of the people.

Recent research discovered that the required number of states called for such a convention of states in 1979 and yet Congress failed to act. Utah state Rep. Ken Ivory has demonstrated leadership by introducing a resolution (H.J.R. 9) demanding that Congress set the time and place for such a convention. The Utah state legislature needs to pass this resolution as soon as possible.

Hopefully, other states will join Utah in demanding action and such a convention will become a reality later this year. If it does, it will demonstrate the rights of states under the Constitution and help put us on a path to a better future.