Reds and Blues Meet with Civility

Reds and Blues Meet with Civility

This Group Got Black Lives Matter And Tea Party Leaders To Talk. Can The Rest Of Us?

‘I don’t know at what point we moved from disagreeing with the argument to hating the person, and that scared me. I decided I have to do something,’ says this Better Angels delegate.

In the wake of the 2016 presidential election, the growing divide between Americans was visible everywhere—in hateful rhetoric on social media, between longtime friends with different political affiliations, and even around the Thanksgiving dinner table. In some cases, two minutes in the voting booth radically altered relationships spanning many years.

Among the organizations working to repair these divisions is Better Angels, which was founded in late 2016 and just held its second national convention June 20-23 in St. Louis, Missouri.

Better Angels takes a different approach to the problem of polarization. It doesn’t try to change opinions; it simply brings people from opposite sides together to listen, combat stereotypes, and find common ground.

When Better Angels co-founders David Blankenhorn and David Lapp began planning the first gathering in late 2016, they enlisted the help of William Doherty, a professor and director of the Marriage and Family Therapy Program at the University of Minnesota.

Doherty drew on his expertise in family therapy to “create a process where people can bring their best selves forward, listen to the other person and not just immediately get into an argument, and reflect on their own contributions to the problems.”

“The reason why people come is because they are concerned about the country and they are concerned with their own relationships with people across the political aisle, their family members,” he said. “So, there is a transcendent reason why they are there, just like when a couple comes in [to therapy].”

It’s not that Better Angels’ members don’t care about politics—in fact, it’s quite the opposite. Lively, but respectful debates on topics like American identity and political correctness were a centerpiece of the recent convention. There was even a session where Hawk Newsome, president of Black Lives Matter of New York, and Ray Warrick, a leader of the Cincinnati Tea Party, shared the stage to talk about the experiences that shaped their beliefs.

Juan Torres, 29, a “red” delegate from Estes Park, Colorado, said he was skeptical of Better Angels at first, but he came to the convention with a liberal-leaning co-worker and loved the debates.

“Many times, people with specific political affiliations disagree [with each other] on the motions,” Torres said. “So, I think it’s a revelation to realize how much variation there is even within the groups. We’re not these monoliths that sometimes we make out each other to be.” 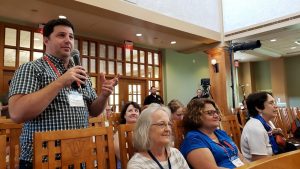 The name Better Angels might not seem to fit an organization concerned with political discourse, but it harkens back to another highly polarized and devastating time in American history. Abraham Lincoln used this phrase in his first inaugural address in March 1861, when he pleaded with the seven Southern states that had just seceded to remember that “we are not enemies, but friends. … The mystic chords of memory, stretching from every battlefield and patriot grave to every living heart and hearthstone all over this broad land, will yet swell the chorus of the Union, when again touched, as surely they will be, by the better angels of our nature.”

Can America Bridge Another Gulf Today?

Nearly 160 years later, the chorus is swelling again. From that first meeting of 10 Trump supporters and 11 Clinton supporters in Ohio, Better Angels’ programming has spread to all 50 states. The organization now has 7,000 dues-paying members. Dues are set at just $12 a year to make it accessible to as many Americans as possible.

Chief Marketing Officer Ciaran O’Connor said the organization seeks to evenly reflect reds and blues in every way. Of the 266 delegates at the convention, 133 sported red name tag lanyards, and 133 wore blue ones. The organization also seeks to have an even split on its board, in its staff, and even in its funding sources.

“I came to the convention because I wanted to be able to contribute more to solving the problems of this world,” said Miles Eddy, 59, a “blue” delegate from Bloomington, Indiana. “Being able to walk into a group that you know is equal your color and the other color, and knowing you can say what you need to say and that everybody is going to be respectful, that’s very empowering. It lowers the defenses enough that you can have real conversations.”

During the convention, delegates discussed and overwhelmingly adopted a platform to guide the organization during the next year. The platform focuses on grassroots efforts to depolarize interpersonal relationships and public discourse in education, the government, and the media.

It’s a lofty goal, especially for an organization with only 7,000 members. To have this kind of nationwide influence, Better Angels’ research suggests that the organization will need to reach more than 1.5 million Americans.

But Blankenhorn is optimistic. “I’ve never been a part of anything where you don’t really have to recruit people. People want to be involved in this,” he said, noting that they are working to develop more online offerings, and establish resources that can be taken into high schools and colleges. Most of Better Angels’ members have joined in the last year and a half, and word continues to spread.

As the organization grows, it will need to remain welcoming to both reds and blues, while making room for those who don’t fall neatly into either of those categories. Delegates also discussed the dangers and opportunities of moving forward with public policy and partnership initiatives—two areas of the platform they debated that have the potential to destabilize the organization’s precarious balance. 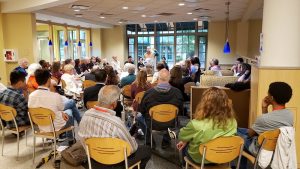 While waiting to vote on the platform, Carolyn Mendenhall, 67, a “blue” delegate from Evanston, Illinois, talked about why she came to the convention, even though she’s still not sure how involved she wants to be.

“My political experience is informed by the death of John F. Kennedy, Bobby Kennedy, and Martin Luther King. I grew up during the Vietnam War. I really wanted nothing to do with [politics],” she said. “But at some point, I opened my eyes and saw where we are as a country. I don’t know at what point we moved from disagreeing with the argument to hating the person, and that scared me. I decided I have to do something.

“Philosophically, I believe in what they are doing here,” she continued. “I’m struggling with how you translate this to action, but I’m still open to learn what’s going on.”

Only time will tell if organizations like Better Angels can gain enough momentum to help Americans on both sides restore civility and respectful debate to the public discourse in the years to come.

Megan Mertz is a writer and editor based in St. Louis, Missouri.