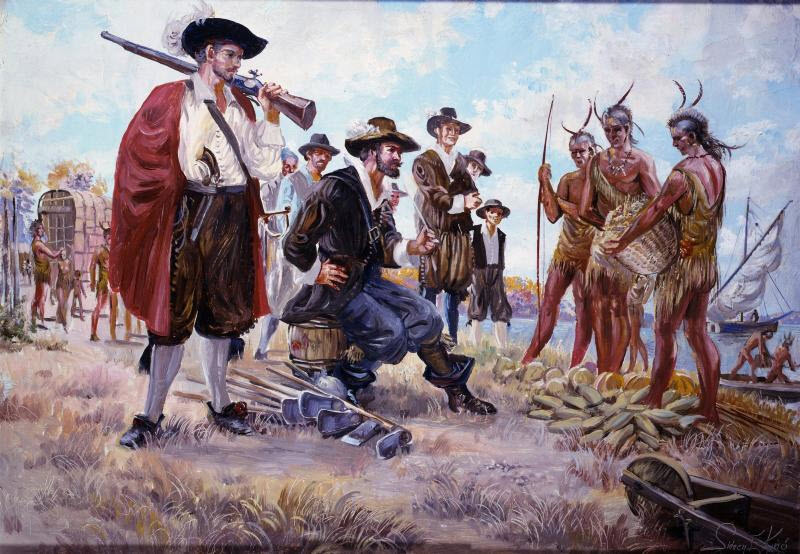 You Know Who Else Colonized Land From ‘Indigenous Peoples’? Native Americans

Hundreds of years before Christopher Columbus and his three ships arrived in the New World, a Native American civilization conquered neighboring tribes and expanded its political and cultural influence across what is now the central and southern United States.

Historians believe its great metropolis and ceremonial complex at Cahokia in present-day Illinois was, in the 12th century, comparable in size to contemporaneous London. The Mississippians, as they are called, were not the only indigenous American people to conquer others’ land — the Aztecs, Incans, Mayans, and Mohawks did much the same, all before Europeans arrived.

Washington Post-contributing David Moscrop, however, thinks only white North Americans of European descent should be labeled “settlers.” In a Feb. 27 op-ed, Moscrop argues:

To be a settler is to exist in relation to indigenous peoples whose land was stolen and on which settlers now live, work, love and laze about. It’s not just your ancestors. It’s you, here, today. It’s your benefiting from and recreating a system of colonialization through extraction, marginalization, abuse and violence.

Moscrop is speaking specifically of an ongoing debate in Canada about the rights of indigenous communities, although his argument implicitly extends to and has been made often about the United States. He cites writer Chelsea Vowel, who explains that “settler colonialism … essentially refers to the deliberate physical occupation of land as a method of asserting ownership over land and resources.”

And who are those perpetrating “settler colonialism”? The “non-indigenous peoples living in Canada who form the European-descended sociopolitical majority.” In effect, if you are a person of European descent living in North America, your very existence perpetuates an oppressive system of colonial aggression against indigenous peoples.

Indigenous Peoples Were ‘Settlers’ Too

Moscrop and Vowel’s “settler” argument has many problems. The first, as I said above, is that the very indigenous peoples who were colonized or displaced by European settlers were themselves responsible for fighting other people groups and settling their land.

Indeed, it would be difficult to find examples of any people group on the face of the Earth who have not been responsible for fighting, defeating, and colonizing others. Perhaps some Pacific Islanders who sailed to and settled on uninhabited islands are innocent, although even they often diverged into opposing, warring tribes. The history of humanity has been defined by the movements and wars of various peoples, sometimes light-skinned playing the role of aggressors against dark-skinned, sometimes the reverse, and sometimes dark against dark and light against light.

This observation is not intended to downplay or excuse European aggression against indigenous peoples. Rather, we should acknowledge that history has always been defined by people groups moving to escape drought, starvation, poverty, or persecution, and people groups opportunistically taking others’ land or possessions. This is a sad human reality, and one we should seek to mitigate. But acting as if one demographic — namely white, European-descended people — are uniquely guilty of this, while non-white people are not, is both ignorant and prejudicial.

Another problem with the settler thesis is that it neglects to account for the varied reasons Europeans came to the New World. Sure, some Europeans came to America looking to get rich or make a name for themselves regardless of the consequences for native peoples or other marginalized groups. But plenty did not.

Indeed, many Europeans who came were escaping violence, oppression, and poverty. My Irish ancestors who immigrated to the United States in the 1850s were dying, as some hundreds of thousands did, because of the potato blight and subsequent famine. This crisis was aggravated by Protestant England’s lack of sympathy for poor, “superstitious” Irish Catholics. My ancestors settled in Kansas and lived in sod houses. One of my grandmother’s uncles married a member of a local Indian tribe.

Many white Americans have similar family histories, defined by suffering, poverty, and oppression in their lands while they grasped for something better. French Calvinists fled Catholic persecution under Louis XIV. Germans — both Protestants and Catholics — fled political oppression and religious persecution. Italian Catholics fled dire economic straits. Ashkenazi Jews fled czarist religious discrimination across Eastern Europe. Categorizing such people through the superficial lens of “oppressive colonizers” is both ridiculous and insulting.

The Settler Argument Collapses on Itself

The settler argument also exacerbates racial tensions. It does this first by projecting a historical narrative that white people are always aggressors, never victims. It also pits Americans of white, European descent against everyone else in society. White Americans, regardless of their family histories, are somehow singularly responsible for historical evils perpetrated against indigenous people.

Presumably, Moscrop and Vowel are aware that white, European-descended Americans are not the only people now living on land once occupied by indigenous people. Latinos and Asians also inhabit the same lands once traversed by Cherokee, Lakota, and Inuits. Would they not also be guilty of the same settler sins?

If a white American is responsible for sins committed against Native Americans simply because he has benefited from historical events entirely outside his control, why not also the son or daughter of recent South Asian or Vietnamese immigrants? Moreover, what of the millions of Latin-Americans trying to escape poverty and violence in Central America by fleeing to the United States and Canada? Should they not also be labeled settlers because they are moving into lands that, according to Moscrop and Vowel’s definition, aren’t technically theirs?

Many human rights advocates argue it is the responsibility of those with more resources to share with those who have fewer resources. Thus, for example, wealthy Western nations should open their borders to people from impoverished, violent, overcrowded parts of the world. Whatever the merits of that argument, Moscrop and Vowel must acknowledge that poverty, violence, and lack of resources were exactly the reason so many Europeans flocked to America.

Destroying the Agency of Native Americans

As a former public school history teacher, I’ve read a lot of recent scholarly work by historians who emphasize the agency of oppressed peoples — black slaves in the antebellum South, South Asians living under British colonial rule, or native people living in America. Such scholarly work, when it avoids political agendas, illuminates much of the historical record and helps us to recognize the inherent dignity and resourcefulness of marginalized people.

Such historical perspectives can also upend the tidy historical narratives that serve our political objectives. During a recent episode of the BBC podcast “In Our Time,” a British historian noted that some members of the Incan royal family participated in and benefited from the exploitative Spanish colonial encomienda system.

Moscrop and Vowel’s settlerist thesis ironically undermines their own political objective of elevating indigenous people and their agency. If indigenous people are to be understood principally as victims of white European colonialism, it vitiates their agency as settlers and colonizers in the centuries before Europeans arrived in America.

Are Native American people incapable of the kinds of conquest attributed to Europeans? Are they to be forced by progressivist liberals to perennially play the part of the victim? Such common leftist tropes, whatever their sympathies for native people, are condescending and insulting.

The continued suffering of indigenous people groups, both in Canada and the United States, is very real and alarming. Consider just a few statistics from a recent book by former Democratic Sen. Byron Dorgan. Native American children’s high school graduation rate is 67 percent, compared with a national rate of 80 percent. Suicides among American Indians are three times higher than the national average, and Native American women are 10 times more likely to be murdered than are other Americans.

It would be foolish to think these numbers aren’t at all related to the historical treatment of indigenous people in the United States. It would be just as foolish to pretend that singling out white people for blame will get us any closer to solving American Indians’ problems.

Casey Chalk is a columnist for The American Conservative, Crisis Magazine, and The New Oxford Review. He has a bachelors in history and masters in teaching from the University of Virginia, and masters in theology from Christendom College.