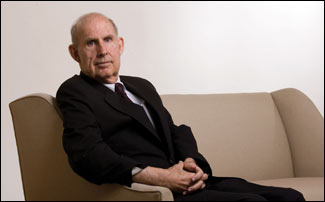 A U.S. district judge has called Chief Justice John Roberts’ promise to be an “umpire who calls the balls and strikes” a “masterpiece of disingenuousness.”

In a famous “I Love Lucy” episode, Lucy and Ethel get a job at a candy factory and have to wrap chocolates as they come off the assembly line on a conveyor belt.

In no time at all, the fast pace overwhelms the hapless duo. Mayhem and hilarity ensue as the two stuff chocolates into their mouths and blouses to hide their ineptitude.

Imagine if instead of a chocolate factory, Lucy got a job as a U.S. district judge. That’s Judge Lynn Adelman of the Eastern District of Wisconsin—except where Lucy and Ethel failed as chocolatiers because of their incompetence, Adelman fails as a judge because of his arrogance.

Adelman’s arrogance is on full display in his left-wing political manifesto masquerading as a forthcoming law review article. In it, he reveals that he either has no clue what it means to be a judge or doesn’t care.

There’s nothing legal in Adelman’s law review article. Instead, he starts by lamenting that the Supreme Court does not decide cases based on public opinion polls. Then he attacks Chief Justice John Roberts by calling his 2005 promise in a Senate confirmation hearing to be an “umpire who [merely] calls the balls and strikes” a “masterpiece of disingenuousness.”

Adelman, appointed in 1997 by President Bill Clinton, bemoans increasing economic inequality in the United States—a strange topic for a federal judge rather than an economist to opine on—and then rails against the Republican Party and President Donald Trump.

The federal judge accuses Trump of making no effort “to enact policies beneficial to the general public,” behaving like an “autocrat,” and failing “to buck the wealthy individuals and corporations who control his party.”

The Republican Party’s agenda, he says, “is determined by a small unrepresentative number of individuals and corporations.” He compares Republicans to “the ‘fireaters,’ [sic] those fervent defenders of slavery who pushed the South into the Civil War.”

Adelman concludes by writing: “We desperately need public officials who will work to revitalize our democratic republic. Unfortunately, the conservative justices on the Roberts Court are not among them.”

None of this, on its own, is novel—it has long been standard fare in left-wing op-eds. What is truly shocking is that it comes from a federal judge who has a duty to abstain from all political activity.

The Code of Conduct for United States Judges imposes almost monastic restrictions on judges’ behavior, forbidding them from participating in political organizations, speaking for or against politicians, donating to political causes, or engaging in “any other political activity.”

That’s because the judiciary’s ability to dispense justice depends entirely on public confidence in its impartiality, and politicking judges cannot appear impartial.

It doesn’t seem like Adelman has read the Code of Conduct, because his comments appear to have violated it so brazenly. Only two explanations for that make sense: total Lucy-level ineptitude or unabashed arrogance.

With these statements, Adelman has destroyed his appearance of impartiality to any reasonable observer. He has revealed that he sees the law as a tool for his progressive politics.

That means that no litigant who appears in Adelman’s courtroom reasonably can have faith that he or she will get a fair shake. If Adelman can use a case as an opportunity to impose his left-wing politics on the country, a litigant credibly might fear that he will—even if the law requires something else.

So much for a government of laws and not of men.

Adelman has embarrassed himself and the court he sits on. He would do well to remember the saga of another federal judge—Judge Richard Kopf—who wrote a controversial and, at times, political blog until court staff said that the blog was an embarrassment to the court.

Similarly, Adelman should remember the fallout from former Judge Richard Posner’s asinine comment that he saw “absolutely no value to a judge of spending decades, years, months, weeks, days, hours, minutes, or seconds studying the Constitution.”

But even those two judges didn’t wade as brazenly into politics or accuse the chief justice of the United States of committing perjury before the Senate.

So what’s to be done? Adelman has life tenure, so there are few ways that he can be called to account for the damage his comments have done to the judiciary.

And nothing can be done to reasonably restore faith in his impartiality. Impeachment is a drastic remedy, but risks turning him into a martyr and further politicizing the courts.

Still, there are some lesser remedies.

First, litigants before Adelman whose cases involve political issues may ask that he recuse himself. Similarly, those who are members of the Republican Party or simply supporters of President Donald Trump may ask him to recuse since he injudiciously attacked both in his screed.

Even if Adelman denied those motions, litigants may appeal and tell the court of appeals about his partisanship.

Second, federal law provides a mechanism by which any person may file a complaint against a federal judge alleging that he has “engaged in conduct prejudicial to the effective and expeditious administration of the business of the courts.”

The 7th U.S. Circuit Court of Appeals, which sits over Adelman, has created a handy form and guide for filing those complaints.

The partisanship that Adelman has demonstrated in these statements has left him vulnerable to well-founded complaints.

In fact, the rest of the judiciary should denounce Adelman’s partisanship and reaffirm the judiciary’s commitment to fairness and to staying above the political fray.

One judge should not be permitted to make a Lucy-in-the-chocolate-factory farce of the judiciary’s duty to do justice.

GianCarlo Canaparo is a legal fellow in the Edwin Meese III Center for Legal and Judicial Studies at The Heritage Foundation.

Zack Smith is a legal fellow in the Meese Center for Legal and Judicial Studies at The Heritage Foundation.

Posted in Judiciary and tagged News