There never has been a free lunch, but tell that to Durbin 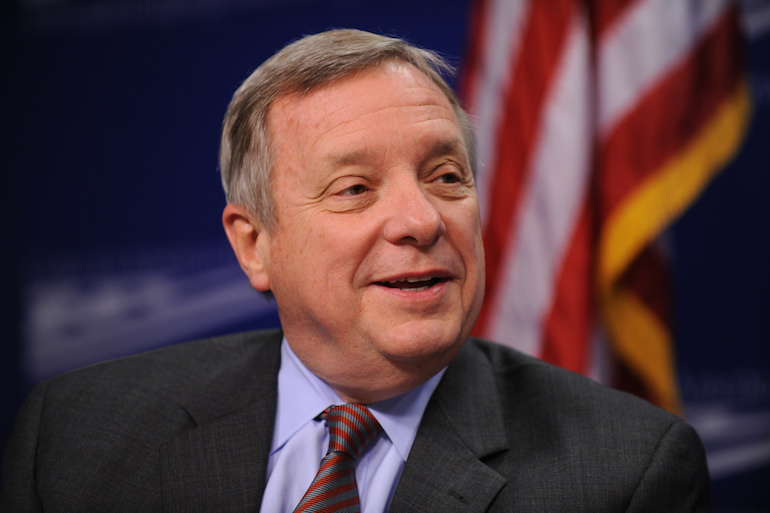 Leave it to the government – to a Democrat – to fail Economics 101.

Sen. Dick Durbin of Illinois – picture him standing atop Lenin’s mausoleum – thinks that prices can be “controlled” by forbidding a seller to charge more than “x” for his product or service. That it’s up to politicians and bureaucrats to decide when a price is “too high” – and to interpose themselves between the seller and the buyer, dictating terms to both.

What ends up happening, of course, is that sellers sell less.

Or, they sell something else. Usually, for more – to recoup their government-imposed losses.

Which usually means fewer choices – and higher prices – for buyers.

Because there ain’t no such thing as a free lunch.

Durbin doesn’t understand this basic principle of economics – of self interest. The government may be able to pass laws limiting prices a seller can charge for a given product or service. But it can’t force a seller to sell.

He can simply elect not to.

Or sell some other thing – for more.

Which is what any of us would do if the government told us we could not – as an example – sell an old car for more than some bureaucrat or politician decreed to be “fair.”

Maybe just hold onto it instead.

Or part the thing out – and charge a fortune for each piece of the car.

But Durbin thinks he can upend economic reality and force buyers and sellers to act contrary to their own self-interest.

A few years back, he had a rider attached to a major financial reform bill – the Dodd-Frank Act of 2010 – that followed the principles of Soviet Econ 101. It imposed price controls on debit card processors, at the behest of large “big box” retailers, who wanted to use Durbin – and the power of the state – to enhance their bottom line at someone else’s expense.

Durbin’s legislative help has been worth an estimated $8 billion annually to big box retailers ($32 billion total, so far). None of which, as far as anyone can tell, has been transferred to consumers in the form of lower prices for the things sold by these big box retailers.

Predictably, Durbin’s meddling in the marketplace has also resulted in something else: New fees on other transactions that had previously been provided for free. And, of course, restricted choices for consumers.

Because there’s no such thing as a free lunch – an economic axiom that everyone not an ex-Soviet economist ought to know but which Durbin clearly doesn’t.

Well, probably he does. Because even a DC politician isn’t that simple-minded.

But politicians like Durbin are agenda (and re-election) minded.

The dictum attributed to Franklin Delano Roosevelt’s advisor (and later revealed to be a Soviet agent) Harry Hopkins comes to mind: “We shall tax and tax and spend and spend and elect and elect.”

Pols like FDR – and Durbin – demagogue an issue – “unfair pricing!” – appealing to the ignorance and baser instincts of voters.

Not all of them fall for this tub-thumping, but – tragically – enough of them often do to keep a guy like Durbin in office.

They do think there is such a thing as a free lunch – or at least, they don’t object to someone else buying it for them.

That’s what Durbin almost certainly had in mind when he snuck his rider into the Dodd-Frank Act back in 2010. That legislation was written chiefly to address the problem of “too big to fail” financial and corporate entities like Lehman Brothers and General Motors, among others and to streamline bankruptcy law and regulatory procedure. It was not supposed to be a give-away to big box retailers. Durbin’s rider was tucked in – as often happens – as a peripheral that few paid much attention to at the time (the focus being on the major elements of the law) but which had major consequences later on.

Fee-free debit cards and checking are now as rare as leaded premium gas. The “points” programs many credit/debit card issuers used to offer as a reward to consumers for using their cards are more restrictive or have disappeared outright.

And, no surprise, interest rates on cards continue to go up.

Because there is no such thing as a free lunch – no matter how much Washington and guys like Dick Durbin try to make it so by legislative fatwa.

There’s a bill before Congress that would repeal what Durbin has wrought, H.R. 5465(introduced by Rep. Randy Neugebauer, chairman of the House Financial Institutions Committee). If passed, the price controls ginned up by Durbin would go the way of the Politburo of the old Soviet Union.

And so, hopefully, also the new fees we’re stuck with now on account of Durbin’s attempt to resurrect the old Soviet Union, one piece at a time.