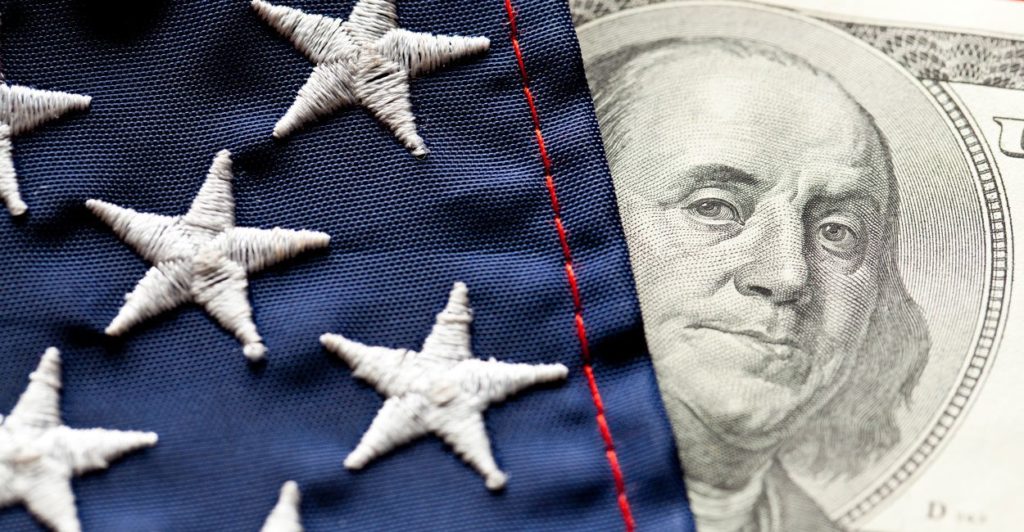 By Stuart MacPhail – May 2020
On April 13 the Committee for a Responsible Budget issued a projection that Debt Will Exceed the Size of the Economy This Year.  It said, “The United States entered the current public health and economic crisis facing high levels of debt and trillion-dollar deficits.  Due to the effects of the crisis and legislation enacted to combat it, debt and deficits will now grow much higher, to never-before-seen levels both in dollars and as a share of Gross Domestic Product (GDP).”The group’s latest projections find that “under current law, budget deficits will total more than $3.8 trillion (18.7 percent of GDP) this year and $2.1 trillion (9.7 percent of GDP) in 2021.  We project debt held by the public will exceed the size of the economy by the end of Fiscal Year 2020 and eclipse the prior record set after World War II by 2023.”  By way of comparison the group notes that “the previous record for nominal deficits was set in 2009, when borrowing reached $1.4 trillion.  As a share of GDP, deficits never rose above 10 percent during the Great Recession.  The only time deficits have ever exceeded our projection for 2020 of 18.7 percent of GDP was in a three-year span during World War II – reaching a high of 29.6 percent in 1943.”  Read the entire detailed report HERE.

Economists Offer a Solution to America’s Debt Crisis –
During April The Heartland Institute issued a new Policy Brief written by economists Dr. Barry Poulson and Dr. John Merrifield.  The 14-page paper is entitled How to Solve America’s Debt Crisis in the Wake of the Coronavirus Pandemic. Poulson and Merrifield say: “Just as the government adjusted to a post-World War II economy, the government must design a phase two fiscal plan for a post-coronavirus pandemic economy.” The summary of the paper states: “As America accumulates more debt, the greatest risk for the nation is economic stagnation. Swiss-style fiscal rules, which would ideally be included in an amendment to the U.S. Constitution, could resolve the United States’ long-term fiscal problems and help spur sustained economic growth. Regardless of whether a constitutional amendment is passed, the federal government should immediately adopt Swiss-style fiscal rules to avert economic disaster.” “This study is a commonsense guide to addressing the national debt,” suggest the authors.  “The debt crisis we are experiencing in the United States has been experienced in virtually every other country in the world over the past half-century.”  The brief paper gives an overview the oft-referenced “Swiss Debt Brake.”  Find the paper HERE.

Shifting the Short-Term Pain to Future Generations –
In mid-April, blogger-columnist Bruce Kauffmann wrote: “The $2 trillion coronavirus-stimulus bill will ease the suffering of millions today, and that is a noble goal.  But it will unquestionably add to the nearly $24 trillion national debt that will cause horrific suffering for millions sometime in the future.  Then again, in a Democracy the people invariably choose short-term gain over long-term pain because it is usually others who pay the price for that immediate gain.

“So we say to Congress, ‘If you want to keep your jobs, keep voting for legislation that keeps the goodies coming.’  The result is legislation providing us with government benefits far in excess of the taxes we pay to fund those benefits.  Thus, we are racking up around $1 trillion deficits every year, and the current debt per American citizen is $72,000, while per American taxpayer it is $191,000.

“Then again, since, so far, we the people have shown no interest in addressing this issue, nothing will be done until the fiscal Grim Reaper appears with a “Balance Due” statement that must be paid, and a democracy collapses over loose fiscal policy, followed by a dictatorship.”

His column was accompanied by the following quote that is commonly attributed to Alexander Fraser Tytler (1747 – 1813), an eighteenth-century Scottish lawyer, judge, writer and historian who served as Professor of Universal History, and Greek and Roman Antiquities at the University of Edinburgh:

“A democracy cannot exist as a permanent form of government. It can only exist until the voters discover they can vote themselves largesse from the public treasury.  From that moment on, the majority always votes for the candidates promising the most benefits from the public treasury with the result that a democracy collapses over loose fiscal policy, followed by a dictatorship.”