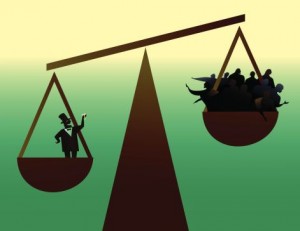 The concept of citizenship is being assaulted on the premodern side by the legal blending of mere residency with citizenship.

The American Founders institutionalized the best of a long Western tradition of representative government with the U.S. Constitution and Bill of Rights. These contracts outlined the rare privileges and responsibilities of new American citizens.

Yet the concept of citizenship is being assaulted on the premodern side by the legal blending of mere residency with citizenship.

Estimates of the number of undocumented American residents range from 11 million to more than 20 million. The undocumented are becoming legally indistinguishable from citizens and enjoy exemption from federal immigration law in some 500 sanctuary jurisdictions. An illegal resident of California will pay substantially less tuition at a California public university than a U.S. citizen of another state.

Multiculturalism has reduced the idea of e pluribus unum to a regressive tribalism. Americans often seem to owe their first allegiance to those who look like they do. Citizens cannot even agree over once-hallowed and shared national holidays such as Christmas, Thanksgiving, and the Fourth of July.

It is eerie how such current American retribalization resembles the collapse of Rome, as Goths, Huns, and Vandals all squabbled among one another for what was left of 1,200 years of Roman citizenship—eager to destroy what they could neither create nor emulate.

Citizenship has always been protected by the middle classes—on the idea that they are more independent and self-reliant than the poor, but can stand up to the influence and power of the elite.

Yet until recently, we had seen a decade of stagnant wages and entire regions ossified by outsourcing, offshoring, and unfair global trade. Historically, with the demise of the middle class so follows the end of constitutional government.

But citizenship also faces a quite different and even greater postmodern threat.

Many of our coastal elites see nothing much exceptional in America, past and present. They prefer the culture and values of the European Union without worrying that the EU’s progressive utopian promises have been wrecked by open borders, economically stultifying regulations, and unapologetic and anti-democratic efforts to curb free expression and local autonomy.

Often, such “citizen of the world” mentalities fuel shame over the origins and traditions of America. Transnational organizations and accords on climate, criminal justice, and human rights are seen as superior to their American counterparts.

A new progressive iconoclasm seeks to destroy statues, rename streets and buildings, and wipe away art that does not reflect more global values.

Does voting—the bedrock right of the democratic citizen—matter that much anymore? In California, tens of thousands of votes were “harvested” by paid campaign operatives. There was also abuse in state agencies in sending out voter registration forms to those who were not legally entitled to vote.

Lone activist federal judges frequently overturn legislation and referenda they find contrary to their own political take on legal theory—without worry that the votes of millions are canceled in a nanosecond.

Meanwhile, the proverbial “swamp” of the bureaucratic, administrative, and regulatory state is so vast and unaccountable that a few clerks can harass entrepreneurs, issue edicts with the force of legislation that ruins lives, or indict, regulate, or audit a targeted individual into legal bankruptcy.

In recent years, we have seen a cake-maker, a video-maker, and a national security adviser so hounded by federal bureaucrats that they either were nearly bankrupted, ended up in jail, or were reduced to penury through legal costs.

We still have a Bill of Rights, but many of our constitutional protections are being rendered impotent. If a rural family cannot find ammunition at the local Walmart or gun store due to organized boycotts and threats to such establishments, then the constitutional right to bear arms is not always exercisable in a practical sense.

Brett Kavanaugh was nominated, audited, and confirmed by the Senate as a Supreme Court justice. But if The New York Times and cable news can relentlessly charge without proof that nearly 40 years ago he was a teenage sexual pervert, then a distinguished judge can be rendered impotent without legal impeachment.

If a student cannot safely express opposition to abortion on demand, question the global warming narrative, or object to safe spaces, trigger warnings, and race-based theme houses on campuses, does it matter that there is in theory still a First Amendment?

We are unwinding at both ends. Tribalism, the erosion of the middle class, and de facto open borders are turning Americans into mere residents of a particular North American region between Mexico and Canada.

Yet even more dangerously, thanks to the fiats of unelected bureaucrats and officials, along with the social media lynch mobs who boycott, harass, and shame us, our constitutional rights are now increasingly optional. They mostly hinge on whether we are judged worthy by an unelected, politically correct, and morally righteous elite.

In theory, American citizenship remains the same; in reality, it is disappearing fast.

Victor Davis Hanson is a classicist and historian at the Hoover Institution at Stanford University, and author of the book “The Second World Wars: How the First Global Conflict Was Fought and Won.” You can reach him by e-mailing authorvdh@gmail.com.