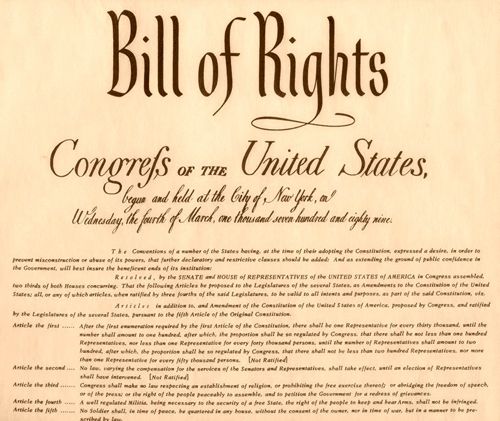 A Different Take on the Bill of Rights

I cringe a little when I read Facebook posts relating how our Constitution was designed to limit the federal government. They imply a pre-existing government went astray and needed curtailment. Our Constitution didn’t limit government in the way of Magna Carta in 1215, the 1381 Charter of Freedom or the 1689 English Bill of Rights that curbed the prerogatives, the inherent and established rights and authority of absolute English monarchs.

Not that anyone would notice today, but ours is a government of defined powers. The prerogatives reside with We The People who compacted to delegate certain authority and no more. Big diff between the American and Brit system, at least on paper.

Imagine the 1st Amendment didn’t exist. In its absence would Congress or Scotus have the authority to establish a religion, or restrict the civil freedoms of religious worship, speech, press, assembly or petition? Without the 1st Amendment, could Scotus have inverted its intent and walled off religiosity from the public square? No.

This was the essence of the Federalist stance regarding a Bill of Rights (BOR) pursuant to the draft Constitution of September 1787. If the new government wasn’t authorized to mess around with religion, speech, press, etc. in the first place, why mention the prohibitions and suggest the government can do otherwise? Without a BOR, perhaps our much-ignored Declaration of Independence would have assumed center-stage importance. What if all the Scotus had were its stirring proclamations of self-evident truths, unalienable rights, life, liberty, pursuit of happiness, and consent of the governed?

Delegate James Wilson (PA) remarked that nobody thought of a BOR until George Mason (VA) brought it up late in the federal convention. Every state voted against incorporating a BOR. The government of the Constitution concerned itself with matters of a general nature, and delegates regarded the status and extent of natural, civil, and political rights as state matters.

Patrick Henry beat up James Madison at the VA ratifying convention over the absence of enumerated rights. When Madison made the “enumerated powers” argument, Henry asked why, for instance, the prohibition of ex post facto laws if the new government didn’t contemplate them in the first place? Madison was so shaken, he promised that if elected to the new Congress he would press for a BOR. Still, the VA ratification vote was close: 89 to 79.

Anti-Federalists argued that most state constitutions opened with a BOR. True enough. But, per James Wilson, when the people established governments in 1776, “they invested their representatives with every right and authority which they did not in explicit terms reserve.” Federalists countered that hardly a dozen years since the Revolution, states often violated their own enumerated rights. Oh.

Perhaps most importantly, Federalists warned that in time, the enumeration of certain rights implied the government could impair others, the innumerable unlisted rights. Now, the Ninth Amendment was supposed to address this problem. Unfortunately the modern Scotus regards itself, and not the voice of the people in their state constitutions, as the fount of rights. So, in this regard, the Federalists were spot-on.

I suppose Scotus isn’t alone in upending the relationship with our government. How many Americans still believe, as Madison wrote to Jefferson, “that the powers granted by the proposed Constitution are the gift of the people, and may be resumed by them when perverted to their oppression, and every power not granted thereby remains with the people at their will?” Very few.

We the People are in a bad way. We’ve lost track of the proper relationship with our government and allow Scotus to define the breadth and depth of our rights. That is up to us, and not a few lawyers meeting in secret conclaves.

Posted in 1st Amendment,Bill of Rights,constitution and tagged American History