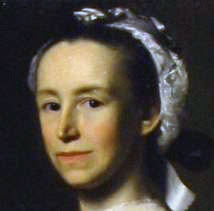 Mercy Otis Warren was a highly influential writer and supporter of American independence in an era when women didn’t write for the public.

March is National Women’s History Month. But despite the heightened attention it brings to women’s influence in American history, one continues to get far too little attention—Mercy Otis Warren (1728-1814). After all, she has been called “The Conscience of the American Revolution,” both Thomas Jefferson and John Adams called her a genius, and Elizabeth Ellet described her as “the most remarkable woman who lived in the days of the American Revolution.”

Mercy Warren was the sister of James Otis and the wife of James Warren, both intense revolutionaries, and hosted groups including the Sons of Liberty and Committees of Correspondence in her home. However, it was primarily her writing that made her “perhaps the most important of Revolutionary War women.”

Warren wrote plays, poetry, and more (anonymously, until her 1790 Poems, Dramatic and Miscellaneous), as well as corresponding with many of America’s leading figures. But she is best known for a series of pro-independence plays that attacked British policies and officials, including The Adulateur (1772), The Defeat (1773), The Group (1775), and The Blockheads (1776). She wrote the anti-federalist Observations on the New Constitution By a Columbian Patriot (initially attributed to Elbridge Gerry) in 1788, objecting to the US Constitution for failing to include a bill of rights and safeguarding against a standing army, and other issues, as well as the three-volume The Rise, Progress and Termination of the American Revolution (1805), her eyewitness account of the revolution.

Consider some of her most memorable insights.

We have seen in all ages the many become the slaves of the few…once aroused to a consciousness of the native freedom and equal rights of man, everyone revolts at the idea of servitude.

The game of deception is played over and over…that mankind in general are incapable of the enjoyment of that liberty which nature seems to prescribe.

Mankind may amuse themselves with theoretic systems of liberty…but we can only discern its true value by the practical and wretched effects of slavery.

The perfectibility of man…may be left to the dreaming socialist…while that rational liberty, to which all have a right, [must] be exhibited and defended by men of principle and heroism who better understand the laws of social order.

Government is instituted for the protection, safety and happiness of the people…[who] have an incontestable right to check the creatures of their own creation…to guard the life, liberty and property of the community.

The rights of individuals ought to be the primary object of all government and cannot be too securely guarded by the most explicit declarations in their favor.

Every domestic enjoyment depends on…the right of personal liberty, which everyone justly claims.

When the first rudiments of society have been established, the right of private property has been held sacred.

A sacred regard to personal liberty and the protection of private property were…embraced by all who had any just ideas of government, law, equity, or morals. These were the rights of men.

America…stepped forth in vindication of the rights of human nature.

America has fought for the boon of liberty…guard it on every side that it might not be sported away by the folly of the people or the intrigue or deception of their rulers.

It is necessary to guard at every point against the intrigues of artful or ambitious men who may subvert the [constitutional] system…most conducive to the general happiness of society.

The independence of the United States must be secured by an undeviating adherence to the principles that produced the Revolution…grounded in the natural equality of man…and that sovereignty which cannot be ceded either to representatives or to kings.

Resist the first approaches of tyranny, which…threaten to sweep away the rights for which the brave Sons of America have fought.

Any attempt [to]…subvert the Constitution or undermine the just principles which wrought out the American Revolution cannot be too severely censured.

It is necessary for every American…to stop the dissemination of principles evidently destructive of the cause for which they have bled…to rescue and save their civil and religious rights from the outstretched arm of tyranny.

There are still many among us who revere [Liberty’s] name too much to relinquish the rights of man.

[America’s] principles…may finally…spread universal liberty and peace as far…as is compatible with the present state of human nature.

Mercy Otis Warren was a highly influential writer backing American independence and government based in liberty, in an era when women didn’t write for the public. As someone who has been termed “the real daughter of the American Revolution,” she deserves to be included with our founders, rather than excluded by focusing attention only on our founding fathers, as an articulate voice for our founding principle of liberty, America’s role in making it into reality and what it takes to preserve the liberty hard-won in the American Revolution.

Her stirring commitment to liberty is no less important to maintain today, because

Public opinion, when grounded on false principles…sometimes creates a tyranny, felt by the minority more severely than that usually inflicted by [a] monarch.

Gary M. Galles is a professor of economics at Pepperdine University. His recent books include Faulty Premises, Faulty Policies (2014) and Apostle of Peace (2013). He is a member of the FEE Faculty Network.