‘A Question of Freedom’ Review 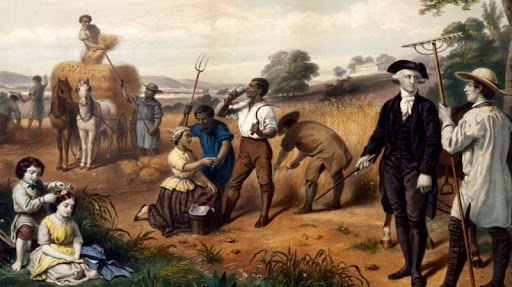 ‘A Question of Freedom’ Review: Slavery on Trial Early

19th-century lawsuits held out the hope that enslaved people could have their day in court.

The American Revolution heralded a soaring faith in the ultimate triumph of natural rights in a world of kings, princes and traditional authorities. Some Americans believed that those rights belonged not just to white men but also to black Americans, the vast majority of whom were enslaved. In 1790, Quakers tried to persuade members of the First Congress to explicitly condemn slavery. Their effort failed, and for generations slavery was largely treated by Congress as a political third rail, to be addressed only at the peril of shattering the Union. It wasn’t until the 1830s that slavery finally forced itself onto the national agenda again, with the founding of the thunderingly abolitionist newspaper the Liberator and the establishment, in 1833, of the American Anti-Slavery Society.

The years in between can seem like a blank space in the history of antislavery, a terra incognita much of which is still unexplored. (A notable exception is Manisha Sinha’s 2016 history of abolitionism, “The Slave’s Cause,” which treats this neglected era in depth.) Now, in “A Question of Freedom,” William Thomas casts a bright light into the period’s darkness. Although his focus is comparatively narrow—the western shore of Maryland and Prince George’s County in particular (a part of Maryland that abuts Washington, D.C.)—he reveals a remarkable struggle for freedom, one buoyed at first by new aspirations in the broader culture and later doomed by rekindled fears.

At the end of the 18th century, Maryland was the third largest slave state, and 58% of Prince George’s population was enslaved. In spite of slavery’s economic heft, intimations of freedom were in the air. Marylanders as well as other Americans were well aware of the Somerset decision of 1772, in which England’s highest court had ruled that slavery was so odious that it could no longer exist in Britain. (Roughly 14,000 slaves lived there at the time, nearly all the property of Britons with plantations in the West Indies.) And in North America, the gradual emancipation of Northern slaves was under way. While changes in the North’s relation to slavery weren’t sufficient to overcome the political power of the South’s slaveowner class, they did foster an atmosphere of questioning in which the appeals of the enslaved gained a purchase on public opinion. One result, as Mr. Thomas shows us, was a series of lawsuits against slaveholding families—some of which, astonishingly, were won by the enslaved.

Slaveowners objected to lawsuits as “oppressive and subversive of the rights of our citizens,” as a proposed resolution in Maryland’s House of Delegates put it, but the suits went forward. Maryland’s constitution of 1776 had declared that all “inhabitants . . . are entitled to the common law of England,” creating a loophole that enabled the enslaved to petition for their freedom. In such a way, notes Mr. Thomas, slaveowners came to be put on trial in public courtrooms.

The most successful suits were rooted in the claim that one of the female progenitors of an enslaved family had been white, or at least not a slave, and that her descendants had thus been held in bondage illegally. The pattern was set by the Butler family, descendants of an Irish woman who, in the late 17th century, had married an enslaved man, thereby herself becoming a slave under the law of the time. Between 1787 and 1791, her descendants prevailed in more than 90 lawsuits, winning not just their freedom but also hundreds of pounds of tobacco—then a form of currency—in damages, lawyer’s fees and court costs. The Butler cases, Mr. Thomas says, demonstrated that courts were newly willing to dismantle hereditary enslavement, at least for the descendants of freewomen.

Mr. Thomas’s valuable and provocative book follows a constellation of freedom suits over nearly 70 years, most prominently those lodged by the Queen family, whose members were held in bondage on several plantations on Maryland’s western shore (west of the Chesapeake Bay)—plantations that were owned by the Jesuit religious order. The Jesuits governed their 8,000 acres through priest-overseers who bought and sold slaves just as secular owners did. The progenitor of the Queen family, a woman named Mary, was a native of Ecuador who in the early 1700s was captured by privateers and taken to London before being sent to Maryland as an indentured servant. There she was forced into slavery, which by Maryland law meant that her descendants would be born into slavery for life.

In 1794, an all-white jury—guided by the family’s oral tradition about Mary’s origins—declared that, since Mary was not a slave, the descendants who were part of the lawsuit were free. The region’s slaveowners, shocked by this courtroom victory and the Butler-family lawsuits not long before, now imagined thousands of other slaves winning their freedom. So fearful were the Jesuits that they bribed one of the Queen family’s leading lawyers not to participate in future lawsuits.

Ironically, the person who emerges most sharply in Mr. Thomas’s narrative is none other than Francis Scott Key. Already, in Mr. Thomas’s words, “an ambitious, articulate, and supremely confident” young lawyer well before penning “The Star-Spangled Banner,” Key owned slaves himself but still considered himself a reformer and litigated on behalf of many enslaved people. Despite his efforts, the next generation of the Queen family was less fortunate than the first. By the early 19th century, with the excesses of the French and Haitian revolutions fresh in Americans’ minds, the Jesuits’ lawyers were warning of social chaos and mob rule if they did not prevail in court.

Around this time, far-reaching changes were also taking place in the way that the law was applied. Washington’s courts, Mr. Thomas says, “were at the vanguard of legal professionalism” and “began fashioning a more uniform, regular, and predictable set of outcomes.” A new generation of Mary Queen’s descendants found that the argument that had worked in 1794—resting on hearsay, since it cited a chain of oral communication—was by the 1810s a dead letter.

One of the Queen family’s cases reached the Supreme Court in 1813, in the shadow of a Louisiana slave revolt that unnerved slaveowners everywhere. Although Key argued that hearsay testimony was still essential in freedom suits, John Marshall, the court’s chief justice and himself the owner of 150 slaves, was not persuaded. He declared: “If the circumstance that the eye-witnesses of any fact be dead should justify the introduction of testimony to establish that fact, from hearsay, no man could feel safe in any property.” The court’s rejection of the suit slammed the door on slaves’ best hope and became in years to come a cornerstone of the legal edifice protecting slavery.

In 1813, after years of costly litigation, the Jesuits seemed ready to extricate themselves from their dependence on slavery. Wedding self-interest to moral principle, they decided to sell “the whole or greatest part” of their slaves with the understanding that, after a fixed term of years, the slaves would be entitled to their freedom. Had the Jesuits actually done so, it would have been one of the largest manumissions in the nation’s history. But it never happened. Southern public opinion was shifting toward a deeper commitment to slavery and the cruel conviction that black skin was in and of itself proof that slavery was deserved. “We cannot help considering them and treating them as our inferiors . . . ,” former Maryland Sen. Robert Goodloe Harper declared. “You may manumit the slave, but you cannot make him a white man.”

Chastened, the Jesuits reversed themselves and, in 1838, sold what remained of their human property—272 men, women and children—to speculators, who shipped most of the slaves to the plantations of Louisiana. Francis Scott Key, too, regretted his earlier sentiments. Although he occasionally represented black plaintiffs thereafter, he came to believe that “the freedom I so earnestly sought for them was their ruin.” Although freedom suits didn’t end, the road to victory in court became inexorably steeper.

In 1836, as the U.S. attorney in Washington, Key denounced hapless Reuben Crandall, a Northern bookseller, for “seditiously” attempting to “vilify” the national government simply by possessing abolitionist literature that he might distribute and that could encourage slaves to “violence and rebellion.” Key hoped to show, Mr. Thomas writes, “that all abolitionist words were patently dangerous.” Key declared to the jury: “The ‘great moral and political evil’ of which I speak, is supposed to be slavery, but is it not plainly the whole colored race?” The jury, to its credit, declared Crandall not guilty. But Key’s argument lived on in the minds of slavery’s defenders up to the Civil War, and arguably beyond.

Mr. Thomas, a history professor at the University of Nebraska, brings a clear and sensitive eye to the tangled relationship of black and white Americans in the early 19th century. He also brings a sense of personal accountability. In the course of his research, he tells us, he learned that one of his direct ancestors, Allen Bowie Duckett, had been a prominent attorney who defended the Jesuits against freedom suits and that Duckett’s father had presided as a judge over a case in which 20 members of the Queen family had won their freedom. Writes Mr. Thomas: “A whole history was missing from what I thought I knew. The same amnesia applies to tens of thousands of white families across the American South and millions of their descendants today.” The nation, he says, needs to experience “a reckoning, with real people, with real histories, with real families whose descendants live among us.”