Americans can’t seem to agree on much of anything these days. In point of fact, Americans have always disagreed in their conclusions. That is the nature of liberty and freedom. But there had previously been a willingness to reach a consensus on the facts upon which to reach conclusions. Sometimes such a consensus has not been possible. A recent example of such a thing would be the effectiveness of masks against Covid-19. In this case, we just don’t know. Human beings don’t do well with uncertainty in general, but the current generations of Americans do worse with it than prior generations. Rather than working with a baseline of uncertainty, we assume we know more than we really do.

Americans are busy creatures who don’t have a lot of time to sort out what is happening around them. They have always been dependent upon the press to disseminate the most important and useful information. So, the press is the purveyor of what we accept as facts. Since humans actually collect, evaluate, and disseminate the facts, that process can never be expected to be infallible. However, the system is dependent upon the interests of the press aligning with the interests of the people. If that breaks down, the press becomes a demagogue rather than a watchdog. That will lead to the same catastrophe that Madison warned about in Federalist #10.

No subject is more important today than what is happening in cities like Minneapolis, Portland, Seattle, and New York City. Most of the media portrays them as “mostly peaceful demonstrations.” When I watch the projectiles heading for police, it really doesn’t look like the protestors are playing catch with the cops. For the life of me, I can’t see anything peaceful about breaking windows, walls, and torching buildings.

It doesn’t take much investigation to realize that about half of the time the protests are not hand-to-hand combat, but violence pretty much reigns after dark. The average NFL football game has about eleven minutes of actual violent contact during a sixty-minute game.[1] So, by the same assessment most media outlets are using, football is a “mostly noncontact sport.” I’m pretty sure any rational American would see that as double talk. Why are so many people swallowing what is obvious demagoguery?

Another quirk of the current protests is the “Wall of Moms.” Most media headlines read something like “Wall of Moms protecting protestors from the big bad Feds.” I’m confused. I thought a mother’s main concern was protecting her children. The only conclusion I can draw from this is that these must be the mothers of the protestors. Given that, it would seem to be a maternal instinct to get one’s offspring out of harm’s way. Certainly, other moms would be home protecting their kids from Molotov Cocktails thrown by the “peaceful protestors.”

If there’s any doubt about the protests being violent, we only have to look at the telling case of former ESPN reporter, Chris Martin Palmer.[2] On 28 May, Palmer responded to the image of a burning building from the riots with “burn it all down.” Three days later, the mob came to his abode and ransacked the Starbucks below his apartment. All of a sudden, he was tweeting about possibly buying a gun.[3] A similar kind of reality has struck Olympia Washington’s mayor, Cheryl Selby.[4]

Now consider that these protests/riots have been happening for months. The duration alone is a tell. First, constructive people cannot be away from their life pursuits for more than a few days. Furthermore, whether protests are completely peaceful or exhibit some amount of violence, once the point is made, there’s really no reason to continue protesting. The point was made months ago about the desire for police reform. 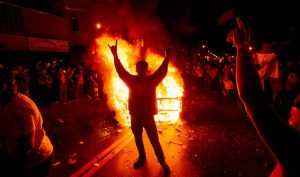 The duration of these protests tells us a lot. It is not about a constructive pursuit. It is about destruction. When symbols of America are being destroyed, whether it’s burning the Flag or tearing down a statue, the reason is being exhibited by the acts themselves. That is, the rioters want to destroy the United States, and that transcends anger. It is hatred of the nation.

Weird language is justifying an apparent bottomless pit of anger and hatred for the nation as a form of patriotic protest. Hating one’s nation is not patriotic. Representing obvious haters as patriotic is reminiscent of Baltisky’s upside-down argument from 1945 that “the highest form of patriotism to one’s own country is loyalty to Soviet Russia.”[5] It is beyond spin. It creates the division innate in the Aesopian language of Marxism-Leninism and should not be tolerated from either the media or elected officials.

Instead of surveying the consensus of what news outlets are posting, we tend to get our news from outlets that tell us what we want to hear. We have stopped questioning the presented facts, and news outlets have stopped posting corrections when they make mistakes. They are appealing to market share rather than their constitutional responsibility to disseminate facts honestly. As the market for news has divided, so has public cohesion. The situation cannot persist.

Rights must be balanced with responsibilities. The special rights reserved for the press in the Constitution come with a responsibility not to demagogue. Without a responsible, fair press, freedom and liberty will be lost. Judging by current events, that could happen sooner than later.

[2] NBA Writer Getting Blasted for His Contradictory Opinions on Riots and Looting. Accessed July 31, 2020. https://www.msn.com/en-us/sports/nba/nba-writer-getting-blasted-for-his-contradictory-opinions-on-riots-and-looting/ar-BB14SUuI.