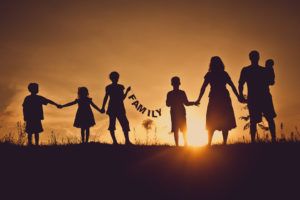 It Takes a Family

Objectivity is the Objective By: Judd Garrett June 20, 2021 In 1996, then first lady, Hillary Clinton published a book, It Takes a Village – the title lifted from an old African proverb, “It takes a village to raise a child.” “The village” she argues for is not simply comprised of our extended family and…

It Takes a Family

Objectivity is the Objective

In 1996, then first lady, Hillary Clinton published a book, It Takes a Village – the title lifted from an old African proverb, “It takes a village to raise a child.” “The village” she argues for is not simply comprised of our extended family and immediate neighbors, but the government itself. She wrote in her book, “Let us stop stereotyping government and individuals as absolute villains or absolute saviors, and recognize that each must be part of the solution. Let us use government, as we have in the past, to further the common good.” And that “common good” is raising our children. She also envisioned, not just a small provincial “village”, but of a “global village.”

Considering Hillary Clinton’s history of Communist sympathizing, most evidence with her close relationship with her mentor Marxist Saul Alinsky, it is fair to conclude that her book is an argument for the eventual Communist takeover, not solely of America, but of the world disguised as a quasi-parenting manual. One of the fundamental goals of Marxism is to devalue, and eventually destruct the nuclear family so, the state can replace the family, and wrest the ultimate power from the people.

Marxist organization Black Lives Matter used very similar language as Hillary Clinton in its original charter, when they wrote, “We disrupt the Western-prescribed nuclear family structure requirement, by supporting each other as extended families and ‘villages’ that collectively care for one another.” How has the “village” approach worked in the black community where over 70% of kids are born out of wedlock requiring the state, to act like “the village”, and assume the role of raising these children?

Breaking down the family unit is essential for the state to control the individuals by dividing and conquering. Slave owners used to separate family units of their slaves as a method of control over them. People become weakened when separated from their family unit, and isolated. The Bolsheviks in Russia promoted the breakdown of the family and encouraged promiscuity as a form of emancipation, and precursor to the elimination of private property.

Starting in the 1960’s, Lyndon Johnson’s great society promoted the breakdown of the family to create dependence on the state for the necessities of life through legislation like welfare laws that required fathers to be out of the house for families to get benefits. Culturally over the last 50 years, there has been a concerted effort to destroy the traditional western family with the institution of no-fault divorces, promotion of promiscuity, normalization of infidelity, legalization of drugs. And the results have been devastating to our children, our families and our society.

Fathers have become a target in this cultural war. The diminishing of the father is the easiest and best way to destroy the family. TV shows and commercials, continually portray fathers as clueless idiots and selfish fools while the mother is the self-sacrificing hero. Rarely is the father portrayed as a strong figure, the moral compass of the family. That would be interpreted as evil patriarchy, or “toxic masculinity” to the woke-mob that controls our culture.

Our culture no longer promotes the image of the strong patriarch. Popular culture has shifted away from Father Knows Best, and Ward Cleaver to Archie Bunker, Al Bundy and Homer Simpson. The father has become not only the butt of the joke, but the joke itself. This is the foundation of the assault on family, and why the concept “patriarchy” is so often vilified by the left. So, any suggestion that fathers, male parents are good, beneficial, necessary must be quashed. The glorification of single motherhood screams that fathers are unnecessary, and useless. All depictions of the strong father, the wise patriarch must be neutered or even vilified.

This is evidenced in screenwriter Aaron Sorkin’s rewriting of the character of Atticus Finch in his Broadway play adaptation of Harper Lee’s novel, To Kill a Mockingbird. In the novel, Atticus Finch is a heroic and humble single father teaching his children about the evils of racism and prejudice, risking everything to stand up for what is right, but that archetype does not or cannot exist in the far-left mindset. So, Sorkin turned Atticus Finch into a stereo-typical southern racist, complicit in the racially motivated death of a black man.

Sorkin turned one of the best characters in 20th century American literature into a villain to be hated. And that is a glimpse of what has happened to American fathers and ultimately to families. Fathers are being turned into villains, and the more fathers are portrayed in a similar bad light, then less important and necessary the role of father will become.

This is all done for a reason. Diminish the role of father, disrupt the western nuclear family,and have “the village” aka, the state, to raise our children. Not only does this require a collectivist mentality turning our individual sovereignty over to the will of the state, but it opens the door to the indoctrination of our children to the collectivist, Marxist ideologies that are pushing this shift. This is why there is a pushback against Charter schools and school choice. The Marxist want all of our children taught in the government run public schools in order to indoctrinate them in far-left ideologies like divisive and racist Critical Race Theory.

The results are evident, across all races, life outcomes for children raised in single-parent households subsidized by the government are decidedly worse than life outcomes of children raised in two-parent homes. Private and charter school children have much better life outcomes than public school children. So, the push to break up the family and take down private and charter schools, is not a push to improve the lives and future of our children, it’s solely about political power by the far left.

The worse off the child is, the more the village steps in on behalf of the child, and the more power and control the state will eventually take over society as a whole. And that’s the purpose of all this, power. And a slew of broken families and broken children are left in the wake of the left’s unquenchable quest for power.

There is an old Chinese Proverb that says, “if families take care of families, then the country will take care of itself.” Is it a wonder that the Asian people in America who emphasize family first, outperform every other demographic group in our country, especially the ones who rely heavily on government support to raise their children?