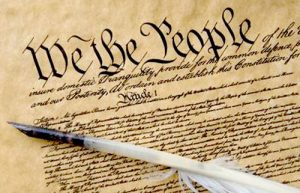 Wanted-A Congress of the United States

By Mike Kapic / January 14, 2020 / Comments Off on Wanted-A Congress of the United States

Wanted-A Congress of the United States

January 14, 2020 / Mike Kapic / Comments Off on Wanted-A Congress of the United States

In recent generations Congress largely resigned its responsibilities to the executive and judicial branches. The grand objectives of our governing form expressed in the lofty Preamble to our Constitution, and enabled by an Article I Congress, are dead letters. Those defined powers in Section 8, most of which apply to national defense, are modern irrelevancies. The funds that Congress can’t find to protect our southern border somehow land in worthier projects like sex education for California prostitutes, and loans to Rolex Jewelers. No nation can long survive a border and culture open to its enemies, yet the practical duty of congressmen and senators today rarely extends beyond their personal power, wealth, and reelection.

Constitutionalism. Who doesn’t shake their head in disgust at the sight of members of Congress when they take their oaths of office? The only thing missing is a screen-shot of their fingers crossed behind their backs. Perhaps most do not bear false witness; maybe most are simply ignorant of the Constitution. In any event, it wasn’t always this way when ignorance, deception, or deadly inaction typified Congress.

Along the way of crafting laws our Framers envisioned not only a deliberative Congress, but one that concurrently considered the meaning of the Constitution, a Constitution that set the objectives and boundaries of lawmaking. Unlike any other lawmaking entity on earth, including the respected British Parliament, a body of law higher than itself, a Constitution, guided the American Congress toward free government. Certainly our first Congress, the one that proposed twelve amendments, famously considered the four corners of the Constitution, its meaning, as it measured the nuances of freedom of speech, worship, assembly, petition, etc.

Congressional constitutionalism is deliberation over the meaning of the Constitution.1

Contrast our Pajama Boy Congress with those of the post-Civil War Congresses, the ones that dealt head-on with a ruined southern society, freed the slaves, and proposed Constitutional amendments to prevent future state assaults on life, liberty or property without due process of law. In these challenging years, Congress still practiced constitutionalism. It did not punt difficult decisions to the Scotus. The 13th to 15th Amendments were five gallons of iced Gatorade on the heads of our victorious Founders in the Super Bowl of free government. These amendments rid the land of the Declaration of Independence of its single glaring contradiction, granted black men the political right to vote, AND charged Congress, not the Scotus, with their enforcement.

Now, constitutionalism may or may not lead to action. Since there will always be far more “good” ideas than those legitimately necessary and proper to the enumerated powers of Article I Section 8, constitutionalism represents something of a burden to Congressmen who naturally want to help constituents and, incidentally of course, improve their reelection prospects. True constitutionalism boots the enactment of good laws inconsistent with Section 8 to where they belong: the states.

The decline of constitutionalism in Congress parallels the decline, thanks to the 17th Amendment, in the quality of representative government in Washington and the increase in the influence of the judiciary in American politics. When Congress operates outside of constitutionalism, reelection is the supreme consideration, and irresponsible federal courts often fill the legislative void.

Having had enough of a Congress unwilling to “provide for the common defense,” Arizona in 2011 enacted measures to identify illegal aliens. The Ninth Circuit shot down the statutes, writing that immigration enforcement was a federal responsibility and the Arizona law overstepped its bounds. But when a Republican is in the White House, states like California can declare themselves a sanctuary for illegals. Oh. Rather than step up to sort things out, Congress is . . . nowhere.

As Eugene Hickok at the Heritage Foundation wrote,

The Framers’ understanding of representation combined a desire to ensure responsiveness to public opinion with a due sense of responsibility. To accomplish this, congressmen kept in mind the desires of the voters while also seeking to move beyond merely catering to those desires. Representation in the republic meant a mixture of responsiveness and deliberation that might yield long term solutions to public problems. It was to yield a brand of representation in which the total was greater than the sum of its parts and was the very foundation of a Constitution based upon the difference between popular government and popularity in government.

Congressional inaction over the southern border invasion illustrates the difference between popular government and popularity in government. When our government was popular, and congressmen naturally exercised constitutionalism, fellow states historically came to the aid of threatened states. Popular government promoted a dutiful Congress, one that did its duty and defended our borders and culture.

In contrast, popularity in government, as applied to each congressman, prevents them from supporting tough border policies or anything else that might remotely threaten reelection. What happened to constitutional deliberation in Congress? The 17th Amendment. Thereafter, excess democracy typically supplanted deliberation. It no longer made political sense for a member of Congress to engage in constitutional deliberation. Constitutionalism involves time, considerable intellectual energy and talent, and seldom centers upon issues that translate easily into voter concerns.

Per Hickock, “In a political environment in which public opinion polls determine members’ actions, it is very difficult for a congressman or a senator to feel independent enough or secure enough to not only espouse an ideology but to act upon it.“ Why risk reelection with an initiative that’s certain to go nowhere?

The heart of every republic is its legislature. A nation without a legislature, or one that has a legislature that avoids deliberation isn’t a republic. Rules will still be made somewhere, but those enacted through the opinions of five lawyers or a bureaucrat in a basement isn’t free government; it is tyranny. The United States could really use another Congress of the United States.