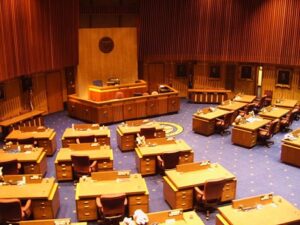 By Mike Kapic / October 12, 2021 / Comments Off on State Legislators and Public Trust

A State Legislator’s Duty To Maintain Public Trust in Elections By Paul S. Gardiner – September 26, 2021 This article addresses the issue of how state legislators can fulfill their constitutional duty to better ensure fair and honest elections at polling places. While the discussion uses Georgia as an example, the recommendations apply to other states where there has…

A State Legislator’s Duty To Maintain Public Trust in Elections

This article addresses the issue of how state legislators can fulfill their constitutional duty to better ensure fair and honest elections at polling places. While the discussion uses Georgia as an example, the recommendations apply to other states where there has been a substantial loss of public trust in the election process.

A very important question is asked: what is considered adequate funding by state legislators to better ensure fair and honest elections at polling stations? Another way to phrase this question is how much funding is adequate to regain and maintain the trust of millions of citizens in the election process?

An analysis of voter attitudes conducted by the Democracy Fund after the November 2020 national election found that about six in 10 Americans (59 percent) believe that permanent harm has been done to the United States as a result of real or perceived corruption and dishonesty in the election process. To regain the public’s trust, many people advocate reverting to what the National Election Defense Coalition (NEDC) calls the voting “gold standard” where voters cast hand marked paper ballots tabulated by hand counts of candidate selections on each ballot.

The great majority of Americans vote in national and state elections at over 200,000 prescribed polling places throughout the 50 states. Hence, it is at these polling places where state legislators need to prioritize measures to better enable and ensure fair and honest elections.

Georgia, for example, conducted in-person voting at over 2300 polling places during the November 2020 national election. Dominion Voting Systems (DVS) equipment and software was used at these polling places. On August 24, 2021, a legal petition was filed seeking an injunction on any further use of the DVS equipment and software primarily because the voting system violates Georgia voting law. Proven and/or alleged security breaches are additional reasons why many Georgians have expressed great distrust in the capability of the DVS technology to produce fair and honest election results. **

Georgia election officials indicate that a total implementation of the NEDC’s voting “gold standard” is not feasible/realistic. Reasons given for this belief are 1) hand counts take far too much time to complete and 2) many additional people and facilities are required at significantly higher costs to taxpayers.

Thus, the next best available option is to use hand marked paper ballots that are tabulated via low cost, non-communicating optimal mark recognition (OMR) scanners. Tabulation outputs or reports from scanners would only be in paper “hard copy” formats that could be hand carried, faxed, or called into a centralized location for further statewide tabulation.

Needless to say, all equipment and software used in this configuration would have to be robustly tested to ensure no remote access is possible to ballots or ballot records via internet, wi-fi, local area network, or other remote intervention.

In an effort to find an example of an equipment and software configuration that satisfies the above requirements, the author contacted Gravic, Inc., a leading provider of OMR software used in conjunction with a wide variety of optical scanners. A suggested configuration along with budgetary cost estimates (without quantity discounts, etc.) for Georgia are as follows:

a) Dell ruggedized laptop, model 5420, customized by Dell to disable all network interface possibilities, including flash drives, etc. Securing the laptop against tampering and theft in a small metal box is a small additional cost option. Cost: $ 1,500 ea; total cost for Georgia is

b) Fujitsu optical scanner, model 7160, customized to disable all network interface possibilities including flash drives, etc. Cost: $ 1,200 ea; total cost for Georgia is $ 5,520,000 (using same calculation for laptop total cost); use of an American made scanner may be possible.

3) BALLOTS. The Georgia Secretary of State’s office projects that if statewide hand marked ballots are required, approximately 300 million printed ballots will be required over a 10-year period at a cost of approximately 55 cents per ballot. Cost: Total 10-year ballot printing costs are approximately $ 165 million. On a yearly basis, a budget allocation for ballot printing costs is estimated to be $ 16.5 million. (It is recommended that a unique code be printed on each ballot for better accountability and security).

4) TRAINING.  Gravic, Inc., estimates statewide training costs for polling officials to be between $ 300,000 and $ 400,000 depending on number of classes, travel expenses, etc.

Georgia’s state government had state revenues (vs federal/other revenues) of approximately $ 26 billion in year 2021. If, for example, $40 million per year is allocated/budgeted for the recommended equipment, software, ballots, and training described above, this funding amounts to less than one-fifth of one percent (.0015) of total state revenues—truly a relatively small cost to regain and maintain much of the public’s trust in elections!

Undoubtedly, greater in-depth analysis is needed of the above method of ballot casting and tabulation. Hopefully, the information in this article will stimulate much analysis and action by the nation’s state legislators. Without fair and honest elections in America, continual one-party rule will most likely occur with all its many terrible consequences. Freedom loving Americans must never let this happen!

** In February 2019, the Georgia Secretary of State’s office published a report listing a cost of  at least $224 million over 10 years, i. e., $22.4 million per year, to use hand marked paper ballots and scanners at the states’ polling places. The Secretary of State opted to use lower cost Dominion Voting Systems hardware and software which proved to be a very contentious and subsequently challenged decision.

Paul S. Gardiner is a retired Army officer, Vietnam veteran, and ardent advocate for fair and honest elections. He is a graduate of the University of North Carolina at Chapel Hill, University of Alabama, and the United States Army War College.