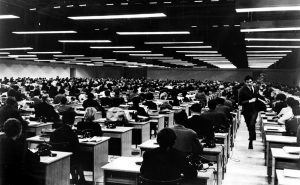 By Mike Kapic / June 25, 2020 / Comments Off on Government’s Confusing Priorities

Michigan Regulators Prioritized Environmental Quality Over Public Safety In Edenville Dam By Tristan Justice and Jordan Davidson – JUNE 5, 2020 Two major dams ruptured in Michigan late last month spurring the evacuation of more than 11,000 people after rushing water destroyed their homes and flooded their communities. Although sudden, a series of lawsuits surrounding the Edenville…

Two major dams ruptured in Michigan late last month spurring the evacuation of more than 11,000 people after rushing water destroyed their homes and flooded their communities.

Although sudden, a series of lawsuits surrounding the Edenville Dam show that the levee was a catastrophe waiting to happen as federal regulators had warned for years of the dam’s instability, but instead were superseded by local concerns regarding environmental standards rather than public safety once oversight was turned over to state officials.

Warnings about the dam’s safety were made well aware by those running the hydropower plant as early as 1999, when the Federal Regulatory Energy Commission told dam operators that they needed to increase spillway capacity to protect from potential flooding that could overpower the structure. Dam operators were notified again of the plant’s deficiencies when it was turned over to Boyce Hydro LLC in 2004.

Thirteen years later, federal regulators condemned Boyce’s in 2017 citing “longstanding failure to address the project’s inadequate spillway capacity at this high hazard dam” declaring that the project poses a significant threat to the local community. According to The Detroit News, Boyce argued that permits to expand spillway capacity were tied up in ongoing litigation with state regulators therefore barring immediate construction.

Still, by 2018 federal regulators turned over the project to state authorities. During this time, Boyce Hydro owner Lee Mueller ordered lowering the levels of the dam’s reservoir, Wixom Lake, in the fall of 2018 and spring of 2019 to keep the water from breaching the structure and destroying neighborhoods below without state approval.

According to the Michigan Department of Environment, Great Lakes and Energy (EGLE), and the state Department of Natural Resources (DNR) however, the move to lower water levels went 5 feet lower than the 3 feet deemed acceptable by federal standards. EGLE and DNR estimates this drawdown led to the “death of thousands, if not millions, of freshwater mussels” and spurred state action.

Michigan Democratic State Attorney General Dana Nessel filed a lawsuit against Mueller over the damage to wildlife that the lower water levels allegedly caused preceding a larger multi-million dollar lawsuit the state had prepared to launch, according to the Detroit News.

Boyce counter-sued in late April, arguing unfair targeting by state regulators while claiming the state has no scientific evidence to prove its decision to drain the reservoir was the cause of death of the freshwater mussels.

On May 1, Nessel’s office demanded that the lake bed be restored, and further reductions in levels be prohibited. Eighteen days later, the dams broke, and thousands lost their homes.